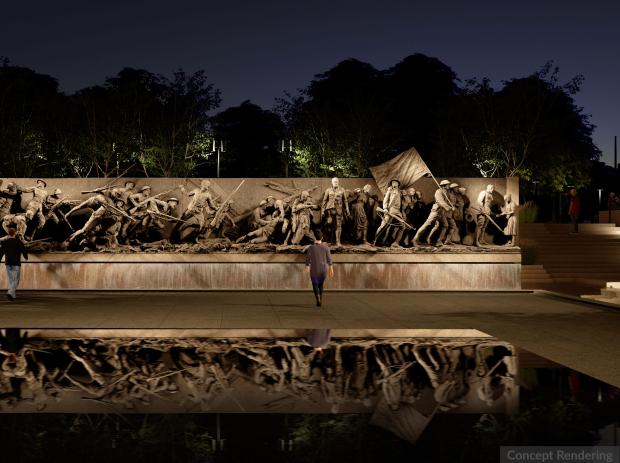 Actor Gary Sinise hosts the inaugural flag raising at the Memorial site and virtual program, held only online at https://firstcolors.worldwar1centennial.org/.

The program honors those who served in the trenches and on the home front. It also celebrates a nation forever changed by the sacrifices they made. The ceremony will feature remarks from present and past military officials and government leaders as well as entertainment celebrity appearances.

The event will also include a performance of “God Bless the U.S.A” by Lee Greenwood, featuring acapella group Home Free and members of the Air Force Band. Also featured are highlights from the film “A Soldier’s Journey,” which tells the story of the design and importance of the World War I Memorial. Additionally, First Colors will include:

The live flag-raising ceremony will include a flyover by the 94th Fighter Squadron, formerly the 94th Aero Squadron. They started its prestigious history as the most victorious air warfare unit of World War I on March 6, 1918. The unit was the first American-trained pursuit squadron to reach the front and see combat service. Pilots of the 94th developed an insignia to commemorate their being the first unit. They also painted Uncle Sam’s Hat on the side of their Nieuport 28 planes before their first flight. The squadron included Ace pilots James Meissner and Douglas Campbell and Medal of Honor recipient Eddie Rickenbacker, also known as the “Hat in the Ring Gang.”

“As our nation’s flag is raised for the first time over this hallowed ground that honors those who served in the Great War, we can take pride in the legacy of service and sacrifice by those who wear the uniform of our great country,” said Terry Hamby, Chairman of the World War I Centennial Commission. “We invite Americans across the country to view this momentous occasion and reflect on this significant generation’s place in our country’s history.”

The inaugural flag flew over the U.S. Capitol, where it signaled the nation’s commitment to fight. The American Battle Monuments Commission then flew the flag at nine World War I cemeteries in Europe. Those sites include Lafayette Escadrille Memorial Cemetery, the burial site for American aviators who volunteered even before America declared war. Another site was Aisne-Marne American Cemetery, on the legendary battlefield of Belleau Wood. This site was one of the hardest-fought American victories in the war. Finally, representing the coming home of nearly 2 million soldiers who returned from Europe, the flag returned to the United States to fly at the World War I Museum and Memorial in Kansas City, Missouri.

First Colors is presented by the World War l Centennial Commission in cooperation with the Doughboy Foundation, the National Park Service, and the American Battle Monuments Commission. For more information, visit www.ww1cc.org/firstcolors.