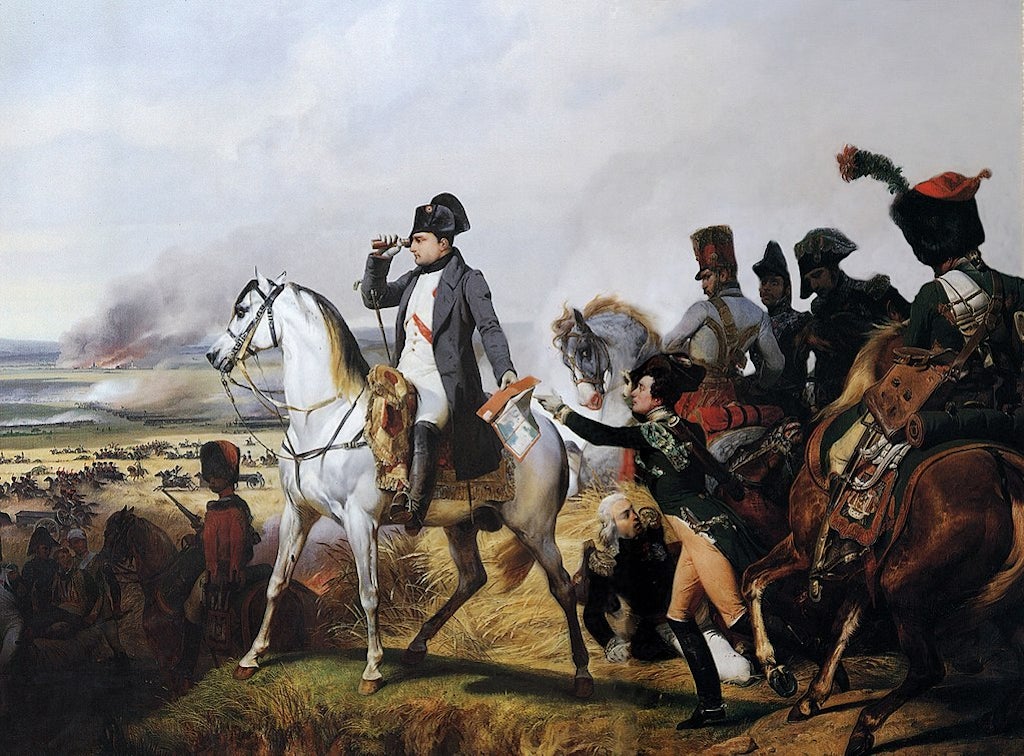 Napoleon at the Battle of Wagram, painted by Horace Vernet.

If there’s any one figure that could be designated Lord of War, it’s probably Napoleon Bonaparte. He was mathematically proven to be the best general the world has ever seen, with a win ratio that so far eclipsed everyone else that second place wasn’t even close. Napoleon went to war with so many European countries so many times, that they were forced to try anything and everything to beat him.

Eventually, they tried not fighting him at all, which might seem like a mistake. The idea of not fighting him actually turned out to be the best idea of all. Within two years, the French Emperor would finally meet his ultimate defeat and be exiled to an island in the middle of the ocean, where he would spend the rest of his life.

It would take seven coalitions of European powers to bring about Napoleon Bonaparte’s final defeat. The combined forces of Russia, Prussia, Spain, Britain, Sweden, Portugal, Italian States, German Kingdoms, and more all failed to stop Napoleon’s military genius between 1803 and 1815. It lasts even longer if you go back before Napoleon became the leader of France, dating back to 1792.

It took them 20 years of fighting Napoleon to realize they would never actually beat Napoleon. Finally, during the war of the Sixth Coalition, representatives of the allied powers met for a conference at the Palace of Trachenberg in Silesia, modern-day Poland, to decide how to proceed against the French Army. Napoleon had already delivered a series of embarrassing defeats on the allies.

At Lutzen, Napoleon not only defeated a combined Russian and Prussian army, he trapped them in a double-envelopment. The only thing that saved the joint force was that the French cavalry was late to the battle and the Russian-Prussian force was able to retreat. Three weeks later at Bautzen, the same army narrowly avoided destruction because one of Napoleon’s marshals failed to block its retreat.

A few months later, Austria joined the combined force at Dresden. Now outnumbered, Napoleon still defeated the Coalition, capturing, killing, or wounding a significant percentage of its army. The Coalition was at a loss for what to do and time was running out. The Emperor was on his way to Leipzig with an army of more than 200,000 men.

The plan they came up with was based on the Russians’ experience of defeating Napoleon’s advance to Moscow combined with the experience of Crown Prince Charles John of Sweden, who was once known as Marshal Jean-Baptiste Bernadotte – one of Napoleon’s own trusted Marshals. Bernadotte/John knew the Emperor and his mind well and had provided advice to Tsar Alexander during the French invasion of Russia in 1812.

SImply put, the Coalition’s idea was to avoid engaging Napoleon in pitched battles, either retreating from the area or avoiding contact with the Emperor’s army altogether. Meanwhile, Coalition armies would engage the armies led by his marshals and generals, battles they felt they could actually win. The strategy was meant to whittle the number of French and allied troops in the Grande Armee as the Coalition massed an overwhelming number of troops elsewhere, eventually creating an army so large that even Napoleon could not defeat it.

After the meeting at Trachtenberg, the Coalition met French marshals six times in battle and won each time. By the time Napoleon reached Leipzig, the Trachenberg Plan had come to fruition and Napoleon was defeated. After the Emperor was forced to retreat to France, the Coalition continued this strategy. Only when fighting Napoleon did they lose, but they fought the French all the way to Paris where he was finally beaten and forced into exile.