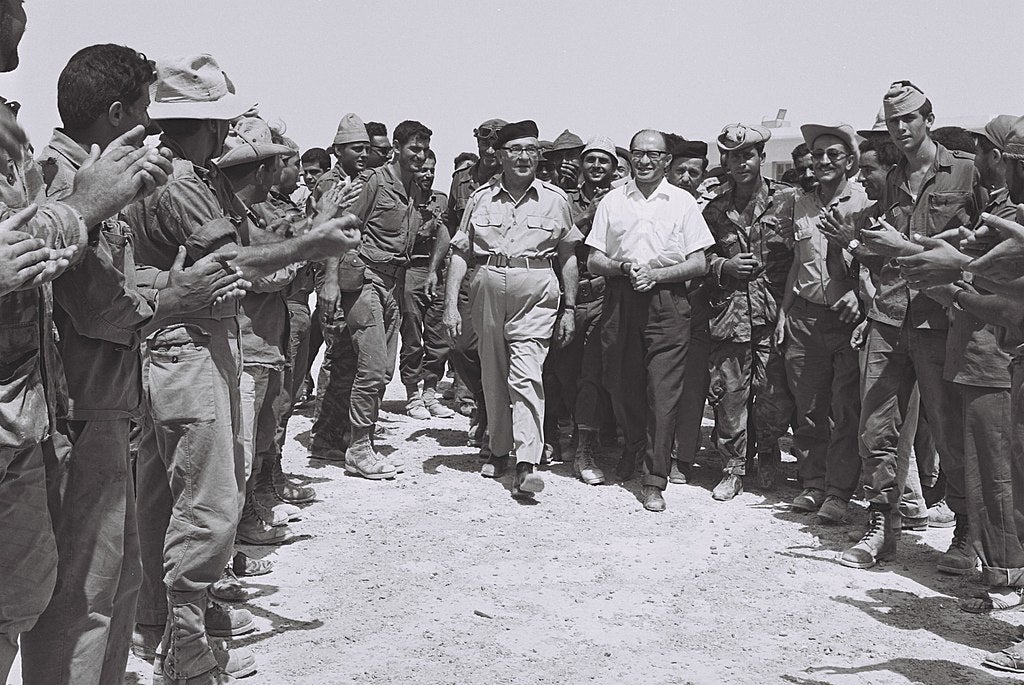 The spring of 1967 wasn’t the best of times for Israel after the Six-Day War kicked off. It was definitely the worst of times. Egypt’s dictator, General Nasser, decided he would be the next neighbor to drive the Jews into the sea. There had been flareups between the two countries for years and one in which the Western powers had to intervene in 1956. Not quite a decade later, Nasser decided to encircle Israel, with the help of allies like Syria. Jordan would later (reluctantly) join the fight against the Jewish state.

By the spring of 1967 the Six-Day War would begin, Nasser boldly—an understatement—to close the Tiran Straits, effectively blocking Israeli shipping. That was an act of war. For the next few weeks, the world watched helplessly as diplomacy failed spectacularly. Israel was faced with a decision, one that caused a supreme amount of anxiety, something that was not known to the general public then.

Israeli Prime Minister Levi Eshkol decided to take to the airwaves and “reassure” the public. His stumbling, halting address had the opposite effect and tension was ratcheted up to unsustainable levels. That part that the public didn’t know?

Chief of General Staff Yitzhak Rabin suffered a breakdown in the lead up to what would become known as the Six-Day War. By the end of May, Israel’s leadership was sure it would have to fight a war on several fronts and the decision was made to launch a preemptive strike on the morning of June 4.

A basket full of extraordinary stories exist from this time, not the least of which was the remarkable effort by the air force to create a critical advantage. An initiative code named “Focus” helped Israeli fighter pilots decrease their turnaround time in order to fly sorties. So much was involved: the flights themselves, returning to base to rearm and refuel, etc.

Israel managed to decrease their turnaround time to an almost unbelievable eight minutes. This advantage led to the decision to send most of Israel’s planes to attack Egypt’s air force, exposed on the ground. The result was that after the first 30 minutes of the war, Israel had destroyed half of the enemy’s fleet. Only 12 planes had been left to defend Israeli airspace during the Six-Day War.

Still, the days and moments leading up to this seminal event took their toll on Israeli leaders.

Rabin himself finally succumbed to the pressures. Later, he recounted that the initial moments of the war produced “sheer terror” in him. Had he led the country to the apocalypse? For a time he felt the answer was yes.

As he would write years later:

“The days dragged on with their burden of nerve-racking meetings and consultations … Time and time again, we assessed the situation, foresaw options, stationed units, formulated plans—while our political leaders remained captive to their illusory hopes that war might be averted.”

From Michael Oren’s Six Days of War, we learn of the turmoil going on in Rabin’s mind:

“’I sunk into a profound crisis brought on by my guilt…that I had led the country into war under the most difficult circumstances,’ he later told an Israeli journalist. ‘Everything was on my shoulders, rightly or wrongly. I had eaten almost nothing for almost nine days, hadn’t slept, was smoking non-stop, and was physically exhausted.’ His wife, Leah, seeing his condition, forbade him from embarking on a tour of the southern front. Instead, she called the army’s chief physician, Dr. Eliyahu Gilon, who diagnosed a case of acute anxiety and administered a tranquilizer. Rabin’s collapse was kept secret from the Israeli public, and would only be disclosed many years later and then ascribed to ‘nicotine poisoning.’ That night, however, Weizman was summoned to the chief of staff’s house where he found his commander ‘silent and still’ and extremely depressed. ‘I endangered the state…my mistakes,’ Rabin stammered. ‘The biggest and most brutal war yet.’ In a report filed six months later, Weizman claimed that Rabin offered him his post. The operations chief declined, though, citing the need to maintain the nation’s morale and to guide the government to a brave and inevitable decision. Rabin subsequently denied that the conversation ever took place, but the fact remained that the chief of staff was incapacitated, and his operations chief was de facto in charge.”

In the end of course, Israel won a smashing victory, one that will always be remembered and analyzed and, in some respects, continually lionized. In all, 777 IDF soldiers were killed. By contrast, Egypt had lost 15,000 men in the Sinai alone. Israel had emerged victorious, even coming into control of the heartland of its ancient nation.

Battles and wars turn on sometimes the slimmest of hopes and for six days in June, 1967, Israel and her commander dangled over a deep and dark gorge. The commander rose from his sickbed in the nick of time. His collapse came at the worst possible time, but when the smoke cleared, literally, the best outcome had been decided.