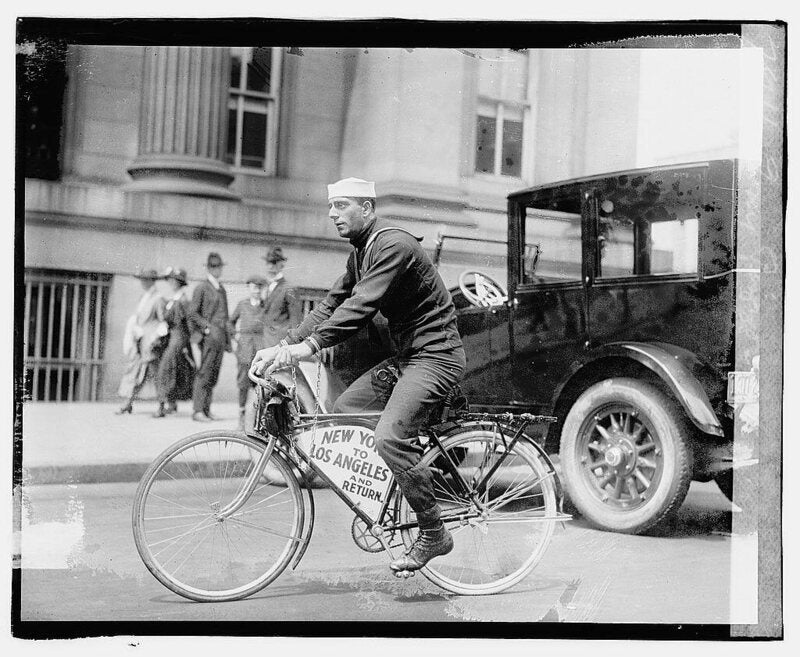 Service members have been known to do some crazy things for bets. From drinking chem light fluid (just don’t) to shotgunning beers through a discarded AT4 anti-tank weapon, troops rarely shy away from challenges. One of the most epic challenges ever accepted took place over 100 years ago.

In May 1919, silent film star Roscoe “Fatty” Arbuckle issued a public challenge: $3,500 (over $55,000 in 2021 adjusted for inflation) to anyone who could ride a single-speed bicycle from Los Angeles to New York before November 1 of that year. Tony Pizzo and CJ Devine, two sailors, took the bet.

They requested permission to embark on the coast-to-coast journey from the Assistant Secretary of the Navy. Imagine submitting a leave form for that trip today. With approval granted, Pizzo and Devine were chained to their bicycles in a ceremony in Los Angeles on May 18 and set out for New York.

The cross-country ride was a difficult one. The interstate system that crisscrosses the nation today did not exist in 1919. Instead, Pizzo and Devine were forced to ride mostly on dirt roads and gravel trails. Additionally, the roads were full of inexperienced drivers, many of whom had only recently purchased their automobile. The sailors had many close calls, one of which took place at the Grand Canyon.

Upon entering Arizona, Pizzo and Devine decided to do some sightseeing and visited the Grand Canyon. The natural wonder became a national park just nine months prior to their arrival. Riding up the rim of the canyon, they stopped to have their picture taken by famed photographer Emery Kolb. On the rim, Devine’s bike slipped and fell into the canyon, almost taking him with it. Pizzo grabbed Devine’s legs and saved him from a fatal fall.

Unfortunately, Devine’s luck was expended with his close call at the Grand Canyon. The sailors made it to Kansas City together where Devine was tragically hit by a car. Though he survived the accident, his injuries took him out of the competition, leaving Pizzo to finish the ride on his own.

Pizzo continued on the journey, averaging over 100 miles a day. Through his steadfast determination, Pizzo rode triumphantly into New York on October 30 with 2 days to spare. He checked into the the Hotel McAlpin still chained to his bike. The next day, New York Mayor John Hylan welcomed the sailor in a ceremony and freed him from his chains.

Although Pizzo said that he wouldn’t make the trip again for a million dollars, that’s exactly what he did (minus the million dollars). The following year, Pizzo chained himself to the same bike and made the return trip from New York to Los Angeles. Devine, who recovered from his injuries, accompanied him as his manager and publicist.

The Navy took advantage of the national stunt and kept Pizzo in the service as a recruiter. He rode to every state capital and was booked at speaking engagements across the country. His incredible physical feat helped to portray the Navy as a tough service with tough sailors.