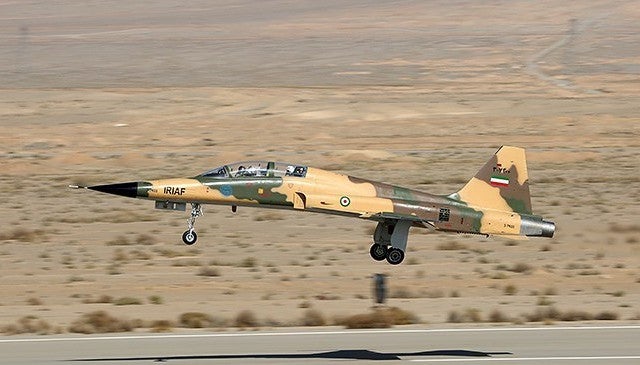 In August of 2018, Iran’s HESA Kowsar fighter plane took its first flight. The Islamic Republic was particularly happy to highlight this achievement because this jet, it said, was “100% percent indigenously made.”

Except that it really wasn’t indigenously made. While the HESA Kowsar might have been 100% made in Iran, the design for the fighter is actually based on the Northrop F-5, a plane that has been continuously in use somewhere in the world since 1962.

In a way, this is bad news for the Islamic Republic of Iran Air Force, because U.S. Air Force and U.S. Navy pilots have been training to kill the F-5 and its Kowsar variant for decades. But that idea either didn’t occur to Iran, it wasn’t enough to deter Iran or the Kowsar has a trick or two up its sleeve – which could be the case.

“The Iranian regime unveils the Kowsar plane and claims that it is ‘the first 100% locally-manufactured Iranian fighter jet,’” the statement read. “It boasts about its offensive capabilities. But I immediately noticed that this is a very old American warplane.”

The Israelis are likely right to be unconcerned about the Kowsar. The light attack aircraft is primarily used for close-air support and as a training plane. If the Iranians ever really fielded the plane against an Israeli attack, the Israel Defence Forces is flying the latest F-35 Lightning II — the match wouldn’t last long.

In short, the Kowsar would be much better suited to air shows than to actual air-to-air combat with the latest generation of fighter aircraft. If they are used in combat, there’s a much better chance of them being used to support Iranian-backed militias in Iraq or Syria than launching an attack outside of Iran’s sphere of influence.

The Islamic Republic actually could end up acknowledging that its design was based on the F-5. Whatever it is, Iran actually has buyers lined up for it. Russia, China and Indonesia have all reportedly ordered the aircraft.

What the Kowsar could mean for Iran (outside of combat aircraft) is a chance to rebuild the Iranian Air Force into a formidable fighting force. The Iranians were once some of the deadliest pilots in the air. A new generation of pilots learning to fly a reasonably advanced supersonic attack aircraft could bring back some of its glory days.

Iran may not be under the weight of crushing sanctions forever, and when it could finally get its hands on fifth-generation or even more advanced aircraft (depending on when those sanctions might end), technology alone won’t do the job. Those advanced planes will still need skilled pilots to fly them.