The Special Forces op that supported the 2003 invasion of Iraq 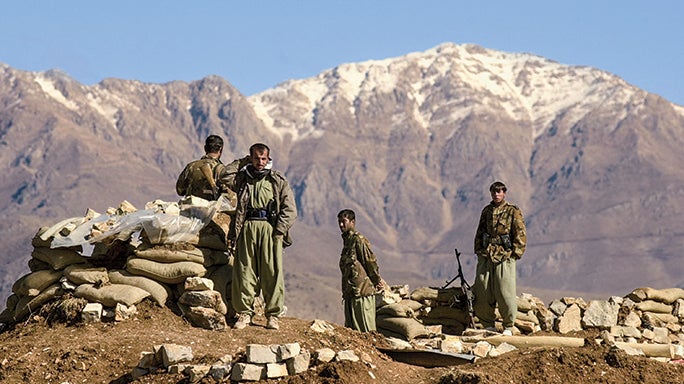 From 2001 to 2003, the Kurdistan region in northern Iraq was in a state of conflict between autonomous Iraqi Kurdish Peshmerga forces and the terror group, Ansar al-Islam. The group was made primarily of Al-Qaeda veterans of the Afghanistan War and was carving out an enclave in the major city of Halabja. Locals from the Islamic Group of Kurdistan rose up to support Ansar al-Islam. The CIA also suspected the terror group of manufacturing poison and chemical weapons in the region. To address this threat in northern Iraq and put more pressure on Baghdad, the U.S. planned to open a second front during the 2003 invasion of Iraq from the north through Turkey.

However, Turkey refused to allow U.S. forces to cross their border into Iraq for the purpose of invasion. Although this development halted the mechanized 4th Infantry Division, thousands of paratroopers from the 173rd Airborne Brigade and soldiers of the 10th Mountain Division’s 2-14 Infantry Regiment were inserted from the air to form an ad hoc northern coalition. Their push south was paralleled by paramilitary operators of the CIA’s Special Activities Division and Green Berets from the 10th Special Forces Group. The roughly 40 CIA officers and Green Berets supported the 7,000-strong Kurdish Peshmerga fighters of the Patriotic Union of Kurdistan and the Kurdish Democratic Party who wanted to defeat Ansar and Islamic Kurdish fighters and push south to join the fight against Saddam.

On the morning of March 21, 2003, Operation Viking Hammer kicked off in northern Iraq. Directed by the U.S. advisors, a total of 64 Tomahawk cruise missiles struck Ansar and Islamic Kurdistan forces. However, the ground assault was postponed until the conventional U.S. forces were in place for their parallel push south. The attack was scheduled for March 28.

On the eve of the attack, the Islamic Group of Kurdistan surrendered. They had already lost 100 fighters during airstrikes on March 21 and were heavily demoralized. The attack the next morning was met with heavy resistance from the Ansar fighters. However, the U.S. advisors called in airstrikes on the Ansar positions and the Peshmerga were able to push through. They reached their first checkpoint, the town of Gulp, hours ahead of schedule.

The bulk of the surviving Ansar forces fell back to the town of Sargat where they consolidated for a final stand. As the Peshmerga fighters and their U.S. advisors approached Sargat, they were pinned down by heavy mortar and machine gun fire. The town’s location deep in the valley blocked radio signals and prevented the Americans from calling in airstrikes or friendly reinforcements. Instead, Green Berets used a Barrett M82 .50-caliber rifle to take out Ansar machine gun crews while Peshmerga forces brought up artillery to destroy the Ansar mortar positions. It took three hours, but the Ansar forces were eventually driven from Sargat.

As they routed the Ansar fighters into the hills, the Peshmerga were again pinned down by machine gun fire. However, the elevated battleground allowed U.S. advisors to call in airstrikes into the night. Once darkness fell, four AC-130 gunships battered the retreating Ansar forces as they retreated toward the Iranian border. Some fighters were reportedly arrested by Iranian forces while others were sent back across the border and captured by Kurdish forces. However, the Kurds allege that many Ansar fighters were given refuge in Iran.

Operation Viking Hammer resulted in the destruction of Ansar al-Islam in northern Iraq and allowed Kurdish fighters to continue south to attack Saddam’s forces from the north. Traces of poisonous Ricin and potassium chloride were discovered in Sargat, as well as chemical suits, nerve gas antidotes and manuals on manufacturing chemical weapons. Peshmerga casualties were light with three fighters killed and 23 wounded.

In addition to the 100 Islamic Kurds who were killed in the initial airstrikes, an estimated 150-200 Ansar fighters were killed during Viking Hammer. There were no American casualties. Seven Green Berets were awarded the Silver Star for their actions around Sargat and several CIA officers were awarded the rare Intelligence Star for extraordinary heroism in combat. The operation has been lauded as one of the greatest Special Forces engagements in modern history.