Exclusive interview with ‘Welcome to Blackwater: Mercenaries, Money and Mayhem in Iraq’ author - We Are The Mighty

Exclusive interview with ‘Welcome to Blackwater: Mercenaries, Money and Mayhem in Iraq’ author 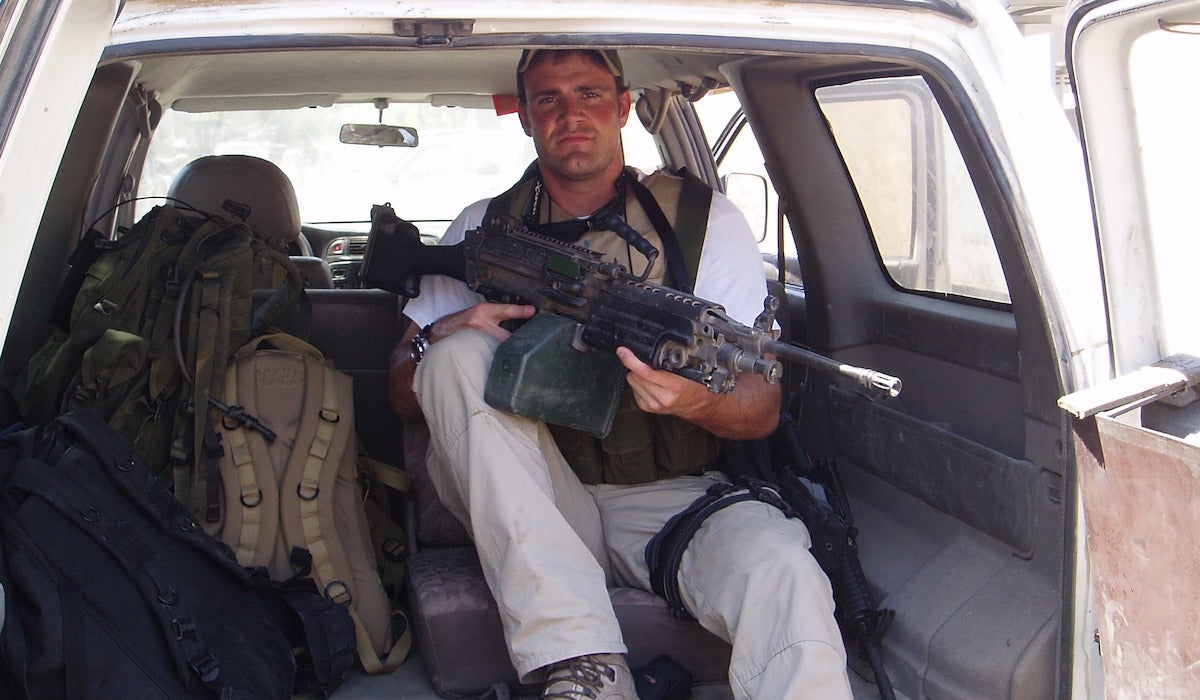 Morgan Lerette, a former Army intelligence officer who spent 18 months in Iraq, writes about his experience as a Blackwater operative with countless missions in his new book, ‘Welcome to Blackwater: Mercenaries, Money and Mayhem in Iraq.’ His memoir recounts what it is like to be a modern-day Ronin in the sands of Iraq. At a time when U.S. civilian employers discriminated against hiring veterans, he ventured with Blackwater at the age of 23 at the recommendation of a friend. This was the start of a road bathed in prostitutes, gold, blood and the ruthlessness required to be successful in clandestine operations. Yet, balancing weight retains one’s humanity.

“Blackwater was a real turning point in my life, much more than my stints in the military,” said Lerette, now 40. “I wanted to write about the people, my brothers and how we survived.”

We Are The Mighty, with the support of Onward Press and United States Veterans Artists Alliance, bring you this exclusive interview with a warrior who lived the dream most combat Military Occupational Specialties dream of: to be set loose upon the enemies of the west and give no quarter – for money.

WATM: Politicians constantly debate the morality of hiring contractors to protect our interests abroad, regardless that the practice of hiring mercenaries is as old as war itself. How has Blackwater impacted the evolution of warfare?

They didn’t have the power to protect their own diplomats as they were running around all over Iraq. So that’s really where Blackwater came in. The war was not planned well as it was. What compounded it was that Blackwater came in and were told they had diplomatic immunity and the rules of engagement were different than the other soldiers. It opened up this gray space where we could operate autonomously.

There was no check and balance in place.

No grownup supervision of what we were doing, when we were doing it, or how we were doing it. I think that’s really when it went bad. If you don’t have the government agency that you are contracted by in the vehicles with you – there is no way for them to supervise. I don’t put the blame on Blackwater entirely or the State Department entirely. They both failed to make sure that people were doing the right thing at the right time.

WATM: Your book is brutally honest about a different kind of deployment than is usually experienced overseas. How did you forge a bond between you and your peers to become brothers?

It is very similar to what you go through in the military. You go in there with a number of people you recently met, who you would not normally come into contact with, and are tasked with protecting an individual and each other. You can’t trust that the Iraqis are going to welcome you with open arms. You can’t expect that the State Department people are going to be able to help you out. You have to trust and count on that person sitting next to you with their body armor and rifle.

The bonding was very similar [in that aspect]. Where it was dissimilar is when you come home from a contract there is no support system. As a unit in the Army or the Air Force, you leave as a unit and come back as a unit. You go to your base and it’s comfortable.

As a contractor it’s really just you.

Your new buddies, people whom you would literally die for and would die for you, are scattered across the nation. It makes it hard to keep that camaraderie, so people start chasing those contracts. They go back for the camaraderie and adrenaline of war. Whereas in the military they tell you when to go.

WATM: Some corporations have propaganda that they will hire veterans but when it comes time to put their money where their mouth is, they do not. How has this barrier for veterans to assimilate into the civilian world affected recruitment to companies like Blackwater?

It definitely helped. When I got into Blackwater in 2004 you had a number of special operations soldiers that have trained for years and years and they never really got to do their job. [For example] you had a guy who trained for [a job] for three years and at the end of it they say ‘okay, that was great, but I still want to [keep doing it.’] That’s where a lot of these guys were: special operations, SEALs, Rangers, Recon Marines and they didn’t get to go to war like they were trained for.

This was their chance to extend that service – to get their war.

Blackwater definitely took advantage that there were people who haven’t seen combat but were trained for it. Even to this day, since I came out with the book ‘Welcome to Blackwater,’ people say to me, ‘Well, how do I join?’

Those companies are saying, ‘This is your chance at war, Iraq has dwindled down to 2,500 troops and Afghanistan the same way. They get there and they sit as a gate guard and they’re frustrated because they really think this is their chance. It’s just not the way it was back then and you don’t have the option of finding that fortune like you used to.

WATM: Current and former members of the military have this idea that Private Military Contracting is the final frontier of combat. Would you encourage or discourage their pursuit of fortune?

Yeah, so, the money dried up a number of years ago. It’s definitely not paying what it did when I was with Blackwater in 2004-05. Not only has the money dried up but so have the missions. It used to be a lot of escorting diplomats around combat zones. Now, the majority of jobs are within site security.

WATM: Onward Press is an avenue for warriors to give up the sword and pick up the pen. What was your experience working with them on ‘Welcome to Blackwater’?

Onward press is specifically looking for people who have been in the military community, such as spouses, who want to get their story told and be able to tell that story well. Every veteran has an amazing story and being able to put that on paper, get it done, put it on Amazon and be able to purchase it – it takes professionals to do that.

So, Onward Press bridged that gap for me.

It’s an awesome organization but writing your experience is very cathartic. Even if I don’t become a bestseller, it’s almost a way for me to give my story over to paper. It took some of the burden I have carried with me throughout my almost three years in Iraq. To be able to give that over to something else, for that reason, it is very, very cathartic.

WATM: Is there anything you would like to say to our readers and the military community?

There is honor in service. There are a lot of extremely intelligent people that don’t have college degrees that do the same thing as me. I’m not unique or special. What I was, was willing to reach out. I couldn’t get to where I needed to go. That goes all the way back to reaching out to figure out my G.I. Bill, to figure out the VA, to getting my book about Blackwater to a publisher and get published.

Whether you’ve spent three to 30 years in the military, set that pride aside and ask for help. If I hadn’t asked for help there is no way I could have published Welcome to Blackwater.

A lot of these stories about soldiers, airmen, sailors, Marines would be lost if we can’t get them documented.

So, reach out. Heck, reach out to me. Go to my website www.welcometoblackwater.com and shoot me an email and I’ll get back to you. I’m always willing to help.

‘Welcome to Blackwater: Mercenaries, Money and Mayhem in Iraq’ is available now on Amazon.

Our mission is to publish well-written, compelling books by military veterans, spouses, military brats, and other family members. Also, people who served in other agencies overseas and their family members.

We are interested in great stories well-told, and are not limited to military, veteran or government-service topics. We publish literary novels, non-fiction, memoirs, mystery, true crime, suspense-thrillers, to name just a few.

All books are available as e -books, trade paperbacks, hardcover and audio.  We pay royalties to our authors and provide editorial guidance and engaging cover art.Onward Press is open for submissions.  Please see Submission Guidelines.