Alwyn Cashe, Christopher Celiz and Earl Plumlee awarded Medal of Honor - We Are The Mighty 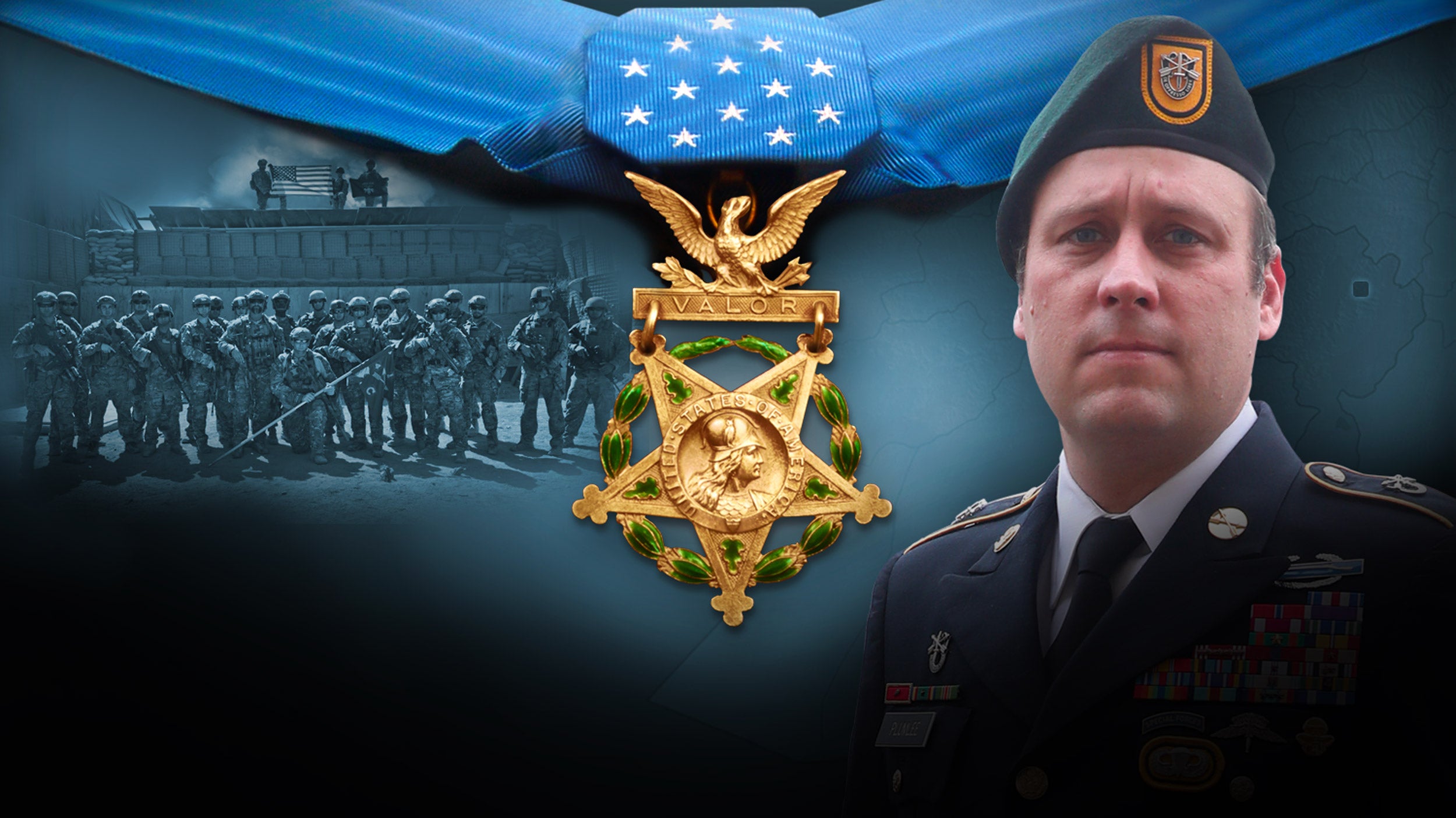 On December 16, 2021, President Joe Biden awarded the Medal of Honor to three soldiers: Sgt. 1st Class Alwyn C. Cashe, Sgt. 1st Class Christopher A. Celiz, and Master Sgt. Earl D. Plumlee. These soldiers went above and beyond the call of duty and demonstrated conspicuous gallantry of the battlefield.

Cashe was awarded the Medal of Honor posthumously. On October 17, 2005, he served as the Platoon Sergeant of Company A, 1st Battalion, 15th Infantry Regiment, 3d Brigade, 3d Infantry Division in Salah Ad Din Province, Iraq. On a nighttime patrol, the M2 Bradley Infantry Fighting Vehicle that Cashe commanded was attacked and disabled by an IED. As the vehicle was engulfed in flames, Cashe managed to escape and rescue the driver. In process of saving the driver and extinguishing the flames on him, Cashe’s fuel soaked uniform caught fire and caused several burns to his body.

In spite of his own injuries, Cashe returned to the Bradley to rescue his men from the rear of the vehicle. Although he aided four soldiers in escaping the burning Bradley, Cashe noticed he was still missing two men. With second and third degree burns covering the majority of his body, he again entered flame-covered vehicle to recover them. Cashe pushed through the extreme pain to encourage his soldiers and ensure they received medical care. When MEDEVAC helicopters arrived, he selflessly refused evacuation until all of his soldiers were evacuated first. Cashe heroically saved the lives of the men he led at the cost of his own.

Celiz was also posthumously awarded the Medal of Honor. On July 12, 2018, he served as the leader of a special operations unit made up of partnered forces and Rangers of the 1st Battalion, 75th Ranger Regiment in Paktia Province, Afghanistan. The unit’s mission was to clear an area of enemy forces to disrupt future attacks against Afghan and allied forces. When the unit was attacked by a larger enemy force, Celiz exposed himself to intense enemy machine gun and small arms fire in order to retrieve and employ a heavy weapon system. This enabled the allied unit to maneuver to a secure location to treat a wounded partnered force member.

When the MEDEVAC helicopter arrived, it immediately took heavy enemy fire. Again Celiz exposed himself to enemy fire to direct and lead the evacuation of the casualty. During this time, he used his body to shield the casualty and the aircraft crew. As the casualty was loaded and Celiz’s team returned to cover, he remained with the helicopter to return a high volume of fire. Celiz constantly repositioned himself to shield the aircraft and its crew, even placing himself between the enemy and the cockpit to ensure the helicopter’s departure. As the aircraft took off, Celiz was struck by enemy fire. Despite this, he motioned for the helicopter to depart rather than remain to load him. His selfless actions saved the life of the partnered force member and prevented further casualties among his team and the aircrew. Celiz died of his wounds received in combat.

Plumlee was awarded the Medal of Honor for actions on August 28, 2013. He served as a Weapons Sergeant, C Company, 4th Battalion, 1st Special Forces Group (Airborne), in support of Operation Enduring Freedom in Afghanistan. Then-Staff Sgt. Plumlee instantly responded to a complex enemy attack against his base. A massive explosion tore a 60-foot breach in the perimeter wall that allowed 10 insurgents wearing Afghan National Army uniforms and suicide vests to enter the base. Plumlee and five other Special Operations members mounted two vehicles and raced to the breach site. They immediately came under effective enemy fire.

Plumlee used his body to shield his driver from enemy fire. He then exited the vehicle, drawing his sidearm, and engaged an insurgent on the vehicle’s right. Without cover and with complete disregard for his own safety, Plumlee advanced on the superior enemy force and engaged multiple insurgents with only his pistol. Upon reaching cover, he killed two more insurgents, one with a well-placed grenade and another by detonating the insurgent’s suicide vest with precise gunfire. Plumlee again disregarded his own safety and broke cover to engage the enemy at close range, including an insurgent whose suicide vest detonated just seven meters from his position. He joined a small group of US and Polish soldiers who began a counter-attack. Fierce fighting ensued as insurgent vests and grenades went off around them. One explosion mortally wounded a US soldier. Without hesitation, Plumlee exposed himself to enemy fire and rushed to the soldier, carried him to safety, and rendered aid. After the attack, Plumlee organized a defense, cleared the area of further threats, and stood ready for a follow-on attack. He remains in the Army where he serves as a Senior Weapons Sergeant with Headquarters and Headquarters Company, 1st Special Forces Group at Fort Lewis, Washington.