The 5 most ingenious weapons ever created for combat 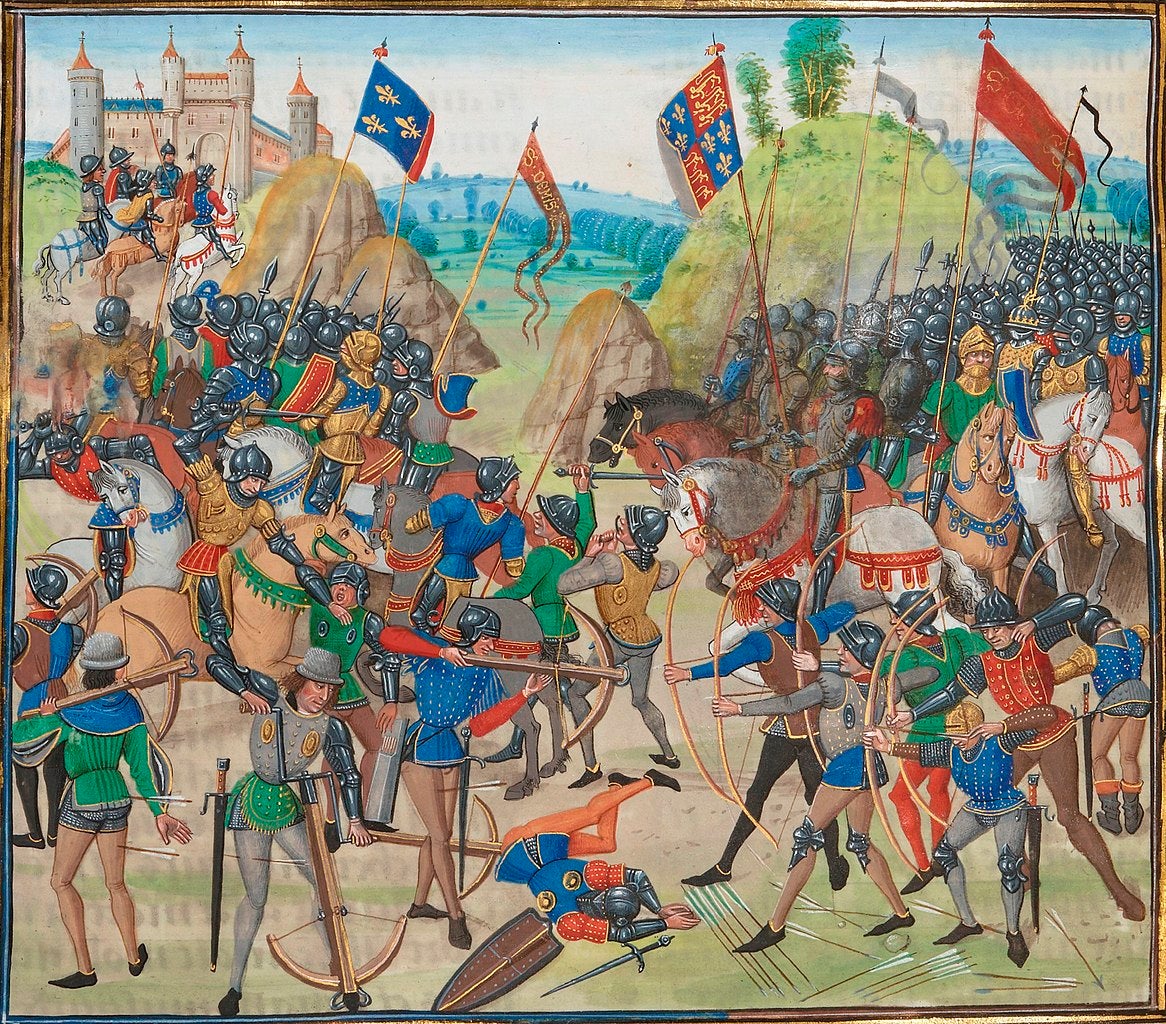 A late 15th century illustration of the Battle of Crécy. Anglo-Welsh longbowmen figure prominently in the foreground on the right, where they are driving away Italian mercenary crossbowmen. (Wikimedia Commons).

China and Russia are designing new, futuristic weapons that can supposedly take down an entire aircraft carrier anywhere in the world or zoom past American radar and detection defenses. These innovations are just the latest in the long human history of anticipating rivals’ greatest strengths and then undermining them. Some astonishing advances have been made to meet the needs of armies at war, but there are a few points in human history where a weapon was so instrumental that it affected combat for years – or centuries – to come.

Here are the 5 most ingenious weapons ever created for combat

The worst part about throwing spears at an enemy force is that all those spears can be picked up, turned around, and thrown right back. Someone in the weapons development department of the Roman Empire picked up on this fact and Rome did something about it.

Legionnaires developed a spear that was made of two different kinds of metal. At its tip would be a harder metal for doing the grunt work of penetrating shields, other defenses, and necks. The shank, however, was designed with softer metal so a spear would bend on impact, making it a one-throw weapon.

At a time when naval combat forced navies to capture or burn each other’s ships to win battles, the side with the best incendiary weapon is probably going to win. More often than not, the side with the best fire weapon was the Byzantine Empire. The weapon was Greek Fire, a kind of early flamethrower that allowed the Byzantines to throw liquid fire that couldn’t be extinguished.

Greek Fire is, to this day, an ancient mystery. We know it existed because of the multiple accounts of its use in combat over the centuries. What we don’t know is how it was made or even what was in the fiery mixture.

The Longbow was the first true equalizer of the Middle Ages, and its use at the Battle of Agincourt changed the way Europeans fought wars forever. A force of 5,000 British archers and knights stared down an estimated 30,000 – 50,000 Frenchmen. As the French got bogged down in mud, they made slow-moving targets.

English Longbowmen using specially-designed arrows cut through the heavily-armored knights. At a time when knights were largely wealthy nobles who dominated the battlefield, the Longbow showed at Agincourt that a force of skilled, specially armed archers was more powerful and cost-effective than heavily armored knights.

When Britain was looking at the looming threat of a Nazi invasion in 1940, it needed to come up with a cheap, fast way to protect its shipping against the German Luftwaffe. Little metal was available for naval defenses and little manpower was free to install them anyway. The solution was the Holman Projector.

This weapon used steam to fire projectiles into the air and give attacking aircraft something to think twice about. The man-portable weapon allowed for even members of cargo crews to be able to defend themselves without the time and expense of installing ship-mounted weapons.

Tractors fit one bomb designed to be the smart bomb of a group, and is fitted with a laser direction unit, the group’s targeting system. Then the other dumb bombs are fitted with shutters and valves that guide the projectiles as they fall. These are the following direction units. One JDAM’s tractor system can guide 24 other bombs, making them precision-guided munitions.