US Marine Jacklyn Lucas was impossible to kill 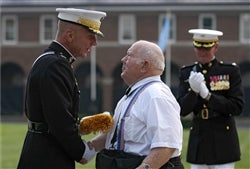 Jacklyn Lucas did not live forever, but his memory might. He died of leukemia in Hattiesburg, Mississippi, probably because death had to wait until Lucas was 80 years old before working up the courage to come get him.

Lucas joined the Marine Corps at age 14, after bribing a notary and forging his mother’s signature. He had already been in military school for four years at this point, attending the Edwards Military Institute since he was 10.

He trained for years to become a heavy machine gunner and by 1945 was based at Pearl Harbor. Seeing that the war might end soon and itching to get into the fight, he deserted his unit and stowed away aboard the USS Deuel. The Deuel was transporting the 1st Battalion, 26th Marines to a little island called Iwo Jima.

The young boy turned himself in to rifle company commander Robert Dunlap, who took Lucas to see the battalion commander. As punishment for his desertion, Lucas was sentenced to join Dunlap’s rifle company and land on Iwo Jima.

Five days later, the men of 1/26 Marines landed on the beaches of the island and Jaclyn Lucas was with them.

While moving to assault an airstrip, his four-man fire team came upon a pillbox and series of trenches occupied by Japanese soldiers. To clear the pillbox, they first had to clear the trenches of soldiers. Fire erupted immediately and both sides lobbed grenades at one another.

Lucas dove on the grenades, smothering them with his body in order to save his fellow Marines. One of them did not explode, while the other blew Lucas into the air and onto his back, gravely wounding the entire right side of his body.

“I hollered to my pals to get out and did a Superman dive at the grenades,” he told President Truman at his Medal of Honor ceremony.

Stunned but alive, he lay motionless. The other Marines pressed on and cleared the enemy out of the area and left Lucas there. They thought he had died of his wounds but more Marines would soon follow. Noticing he was alive, the Marines called for a Corpsman, who had Lucas removed from the battlefield.

Jaclyn Lucas survived the grenade blast, but not before being filled with fragmentation. After more than 20 surgeries, doctors had to leave 250 pieces of the metal frag inside his body. There was so much that it would later set off metal detectors at airports.

Lucas received the Medal of Honor for throwing himself on those grenades, becoming the youngest Marine and the youngest person in World War II to receive the medal.

After the war, Jaclyn Lucas was still a young man and he decided to join the U.S. Army in 1961. He was afraid of heights, so he chose to go to the 82nd Airborne. On one of his early training jumps, his parachute failed to open. Then his reserve chute failed to open. He hit the ground without one. He told reporters that his “stocky build” and his last-second parachute landing fall saved him that day.

At the end of his life, Lucas was fighting leukemia and was on a kidney dialysis machine. Knowing full well what would happen if he was taken off of dialysis, he decided to finally let death have a go at him. He asked doctors to remove the machine.

He is still the youngest person to receive the Medal of Honor since the Civil War.