That time Israeli airmen and a US Marine attacked 10,000 Egyptians and won - We Are The Mighty

That time Israeli airmen and a US Marine attacked 10,000 Egyptians and won 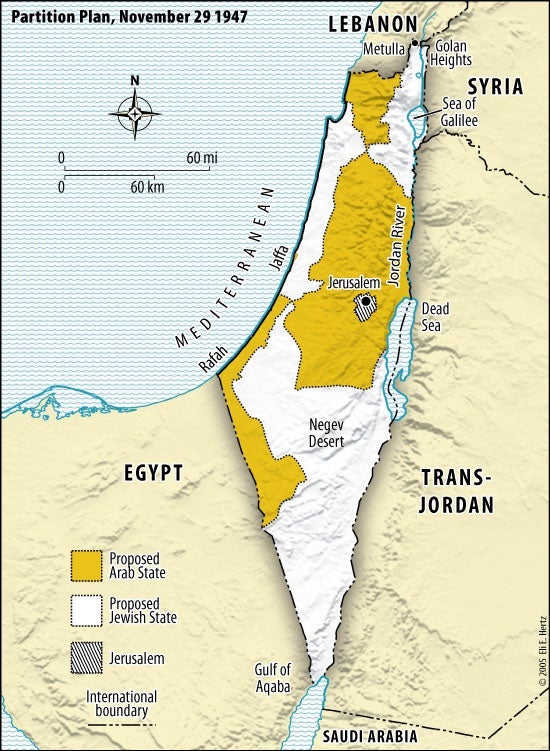 In November 1947, the United Nations voted to partition what was then called “Palestine.” The plan called for a complete British withdrawal, separate Jewish and Palestinian states, and an international regime to control the ancient, holy city of Jerusalem. The partition plan was rejected by Arab nations in the region on the grounds that it violated the UN charter’s principles of self-determination. Before May 1948, the conflict consisted of separate Arab and Jewish fighting for supremacy and fighting to expel the British. On May 15, 1948, the Jewish people of the region declared independence as the state of Israel and the world hasn’t been the same since.

The Partition of Palestine passed in the UN General Assembly in November 1947. Immediately after the partition vote passed, the country descended into a civil war for control of the political and cultural hearts of the region. May 14th, 1948 was the day the British announced their intent to end their UN mandate. Shortly before midnight that day, Jewish political leader David Ben Gurion declared an independent Israel.

The Jewish people in Palestine didn’t just get independence handed to them. The conflict that started the day after the partition vote now exploded into a full-scale war, the day the British were to leave. The neighboring Arab states Egypt, Transjordan (now modern Jordan), Iraq, and Syria immediately invaded the territory declared to be Israel. Jewish paramilitary groups that were once considered terrorists under the British Mandate coalesced into the Israel Defence Forces. These groups were already engaged in conflict with Palestinian Arab units throughout the area, including the Arab Liberation Army and Holy War Army. The British were functionally gone anyway and the major cities of Tiberias, Jaffa, Haifa, and Acre had already fallen to the Israelis.

Syrian forces would invade from the North, linking up with Iraqi and Jordanians forces in Nazareth, then pushing West to take the coastal city of Haifa. The Egyptians were supposed to capture Tel Aviv from the South. The Jordanian King Abdullah I didn’t want to invade any area given to the Jewish state under the UN partition, and the plan was changed. The Egyptians, by far the largest of the invading armies, were still to invade from the South and capture Tel Aviv. Two weeks after the Israeli declaration of independence, Egyptians were knocking at the door, ready to move on Tel Aviv. The defense of the city fell to one man, Lou Lenart. Lenart would enter the history books as the man who devised and executed the IDF’s first aerial strike.

Lenart was a seasoned combat airman. He joined the Marine Corps in 1940 with the singular goal of killing Nazis. He would go to flight school later in his career, which saw him serve as air support for Marines on Okinawa and participate in bombing raids over Japan. After the war, he found out he lost 14 family members in the Holocaust. That loss galvanized his feelings on an independent Jewish state. By the time he arrived in Israel, he was an experienced combat pilot.

Lenart and three fellow pilots (Ezer Weizmann, Mudy Alon, and Eddie Cohen) flew four Czech Avia S-99 airplanes, cobbled together with the remains of Nazi Messerschmitt fighters. Armed with a machine gun and four 150-pound bombs, the four flew south to Ashdod where they’d heard the Egyptians were camped. They had no radar, no radios, and communicated with hand signals. Finding masses of Egyptian troops, trucks, and tanks, the Jewish pilots dropped low, dropped their bombs and shot up anything they could see.

“They didn’t even know Israel had an air force,” Lenart would say later. “The Arabs had everything, we had nothing. And we still won. When I’m asked how we did it, I say: ‘We just didn’t have a choice. That was our secret weapon.'”

They encountered what turned out to be an armored column of 10,000 Egyptian troops and 500 vehicles. Cohen was killed in the attack and Alon was shot down (he would be killed later in the war). The Egyptians were stunned and scattered. By the time they recovered, Egypt had lost the initiative.

This was the beginning of Operation Pleshet. Israeli forces would then harass the Egyptians and group for a counter attack. Though that counter was not successful, Egypt’s strategy turned from offensive to defensive and to this day, the bold Israeli airstrike is credited for saving Tel Aviv. The (first) war for Israel’s existence would drag on until March 1949 but Tel Aviv would never fall to an Arab army.