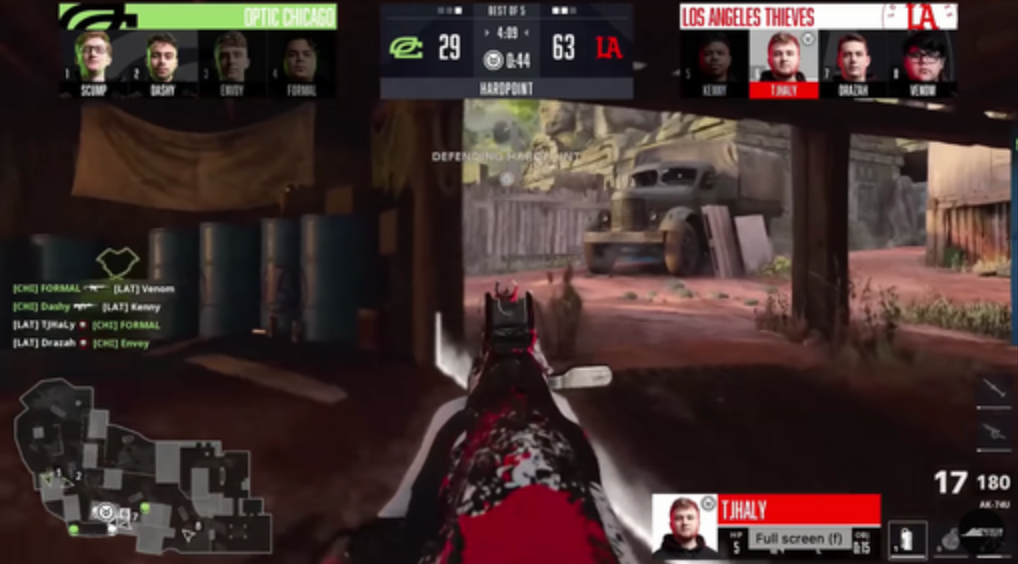 Military Appreciation Week will take place the week of May 10th, and is the Call of Duty League’s inaugural celebration of community members who have served in the United States military.

To further show support and advocacy for the military community, USAA is joining the Call of Duty League Gives Back program, which unlocks unique experiences and more for the military community. As part of this new program, Minnesota RØKKR provided in-game training to the official United States Space Force Call of Duty competitive team as they prepare to defend their championship in the 2021 C.O.D.E Bowl.

As Call of Duty League Gives Back expands, it intends to also open avenues for fans to participate. The program will support the Call of Duty Endowment (C.O.D.E), a nonprofit organization which helps veterans find high-quality jobs after their service.

“Call of Duty League is proud to partner with USAA to shine a spotlight on the brave U.S. service members that serve our communities. USAA’s position as the presenting sponsor of the next Call of Duty League Major Tournament unlocks an opportunity to give back to the military community in a myriad of ways, including exclusive experiences in collaboration with the teams in the League,” said Brandon Snow, Chief Revenue Officer of Activision Blizzard Esports. “Military Appreciation Week is a celebration of those who have served our country, and we’re excited that USAA has helped create this important moment.”

From May 3-31, Call of Duty League and USAA will host a giveaway on callofdutyleague.com/usaa for current and former U.S. military members, while highlighting key figures who have made a positive impact on military communities. The giveaway includes a free C.O.D.E Battle Doc Pack (valued at $9.99), available in both Call of Duty®: Black Ops Cold War and Call of Duty® Warzone™. The pack features an Operator skin, weapon blueprint, calling card, weapon charm, and emblem.

“USAA’s sponsorship of Call of Duty League enables us to honor our military who love the game and reach them in an authentic and meaningful way,” said Eric Engquist, USAA vice president of enterprise brand management and U.S. Army veteran. “The new initiatives allow us to more specifically celebrate our military members and provide a lasting program that will impact and support the whole military community.”

In its second season, the Call of Duty League includes 12 teams from four countries and brings together the best players from around the world. For more information on the League, sign up for updates at callofdutyleague.com or tune in to the action at youtube.com/codleague.

Founded in 1922 by a group of military officers, USAA is among the leading providers of insurance, banking and investment and retirement solutions to more than 13 million members of the U.S. military, veterans who have honorably served and their families. Headquartered in San Antonio, Tex., USAA has offices in seven U.S. cities and three overseas locations and employs approximately 36,000 people worldwide. Each year, the company contributes to national and local nonprofits in support of military families and communities where employees live and work. For more information about USAA, follow us on Facebook or Twitter (@USAA), or visit usaa.com.

About Call of Duty League

Activision Blizzard Esports (ABE) is responsible for the development, operation, and commercialization of Activision Blizzard’s professional gaming properties including the Overwatch League™, the Call of Duty League™, and Hearthstone® Grandmasters, among others. It is ABE’s vision to be the most innovative, scalable, and valuable developer of competitive entertainment.

Headquartered in Santa Monica, California, Activision is a leading global producer and publisher of interactive entertainment. Activision maintains operations throughout the world and is a division of Activision Blizzard (NASDAQ: ATVI), an S&P 500 company. More information about Activision and its products can be found on the company’s website, www.activision.com or by following @Activision.