7 tips to earn a perfect rifle score on qual day 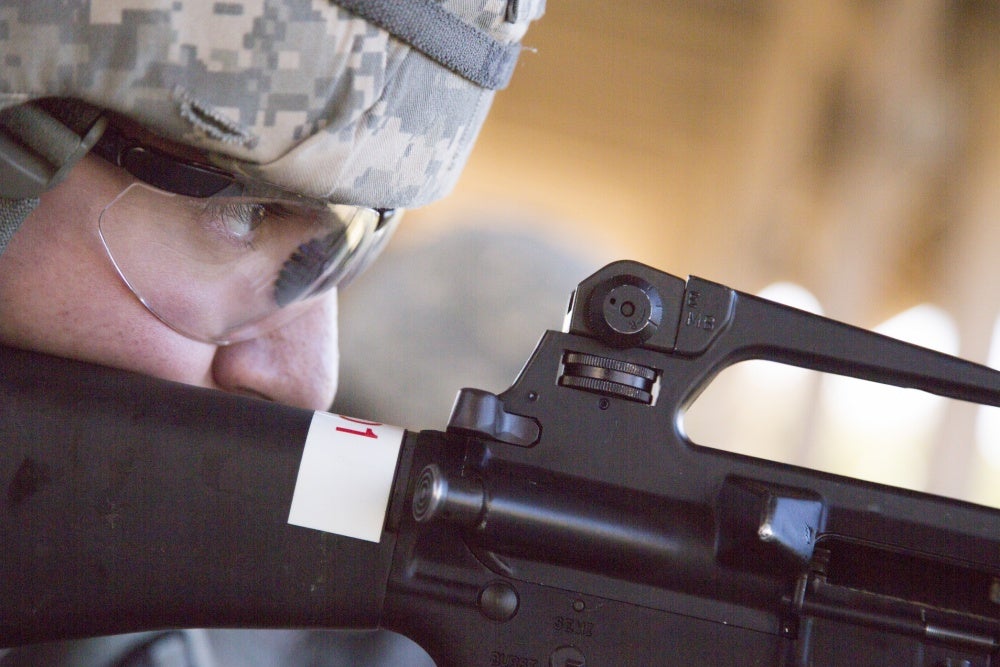 One of the most important skills a Marine can possess is to be lethal with their primary weapon. ‘Every Marine is a rifleman’ is a motto that personnel other than grunts use against infantrymen in arguments. It’s not just about bragging rights, we’re playing for keeps. A high rifle score is essential for a promotion. Earning a perfect rifle score is not just achievable but repeatable. Here’s how.

For the uninitiated, Marines have an annual rifle range requirement. There are two events, Table One and Table Two. They will go to the rifle range and sleep there; it is usually mandatory to stay but if not, Marines have the option to drive home or barracks room. The first week is Grass Week where Marines practice maintaining firing positions and aim at a firing barrel. Coaches may schedule this on an open field near the barracks. The second week they will go to the live fire range and qualify for their rifle badges.

Only Table One is for bragging rights. However, for promotions the total is used.

On Table One the maximum score is 250 and Table Two it is 50. The scores are combined and the total is used toward their cutting-score, a cumulative number required for a promotion to the next rank. For the sake of brevity, we will focus on Table One.

Most Marines do not know that there are waivers for those ranked Expert two or more years in a row. If you hate going to the range for two weeks and eating box chow in a pit, earning the Expert Badge has benefits. Your unit may issue an order to send Marines to the range en masse, this may be the time you want to mention it.

To provide you with more ammo for your fight, you can read it yourself in MARINE CORPS ORDER 3574.2K :

Chapter 2, 2002. section g. Marines who qualify Expert for two consecutive years are eligible for a 1-year exemption from firing. No expert scores prior to 1 Oct 05 will be counted towards meeting the two consecutive expert criteria. This exemption is not automatic and must be granted by commanding officers at the company level or higher based on demonstrated proficiency, training, deployment schedules, and other factors deemed applicable. Marines granted this exemption will be required to fire during the next fiscal year and every other year thereafter while the Marine maintains an expert score and is granted an exemption by their Commander. Marines who qualify less than expert will be required to fire expert two consecutive years in order to be eligible for the exemption again.

I hope you kept your name clean because this is one of those times when a good reputation pays off.

Whether you are personnel other than grunt or a seasoned veteran of the middle east, take Grass Week seriously. To be complacent here is going to set up a weak foundation for the next week. Take a slice of humble pie and really work on your bone support and fundamentals of marksmanship. Ask your coaches to help you with your form. The both of you are literally there all day, all week, so you might as well give them something to do and earn their pay. Make them be your personal coach because everyone else is goofing off. Your rifle score will thank you.

2. Slow and steady squeeze of the trigger timed with your breathing

Pulling the trigger should be almost a surprise. Control your breathing, squeeze the trigger on the exhale and time the shot when your body is completely at rest.

3. Review the range book for any changes from last year

Again, complacency can kill your rifle score. Some people do not even open the log until test day and are lost in the sauce on where to write things. The worst time to familiarize yourself with the paperwork of the rifle range is when you are at the rifle range. Take literally two minutes and know where everything is in there, so you do not have to scrabble when every second counts later.

4. Mark every shot in the range book

I don’t know why some people are averse to writing things in the rifle book. Maybe it’s pride or hubris. Regardless, mark your shots. At some point during the range, a Marine will have the misfortune of a shot called a miss when they know they hit. That Marine can contest the call and have the pit investigate in detail for the shot. Sometimes a thing called a keyhole will happen which is when a shot hits the edge of another hole. It’s hard to notice the first time around but those guys in the pit have been looking at that target all day. If it happened, they will find it.

The burden of proof is on you first, if you didn’t mark your shots you can’t prove it was their mistake and not yours. Who would you believe? A Marine with attention to detail or one who can’t be bothered to mark a dot on a piece of paper?

Pit love is when someone pulling targets falsifies a shot for the benefit of the shooter. Bro, c’mon. We’re not in elementary school where you help your best friend cheat on the test. The Marines running the range are aware of cheating and every method that has been used. You will be with people you do not know from other units and they will not give you pit love. They will believe they shot on merit and that you suck. The only way to prove otherwise is to admit you cheated. Don’t do it.

6. For a higher rifle score, do not shoot the target as soon as it comes back up

The Marines pulling the targets may not be paying attention immediately as the target goes up. They are surrounded by the sounds of hundreds of bullets impacting around them. If you fire as soon as it comes up because you’re in a rush they may not see it in time. As a result, you will have a target that does not come down and labelled a miss. This is when your marked shots in your range book will come in handy to challenge the call and have them look for it again.

Or you could’ve avoided it by taking a breath, concentrating on your fundamentals of marksmanship and fired your well-aimed shot.

7. Use that coach as much as possible

They will tell you if your breathing is off, if you’re jerking the trigger, whether your footing or shoulders are off or if your sling is too loose. Be as annoying as possible because you’re a war-fighting professional and you deserve your dedication to pay off. When coaches see someone taking the rifle range seriously, they will huddle around that person and give more instruction. When you start shooting high, everyone wants to know who is the badasses climbing their way to expert or even a perfect score.