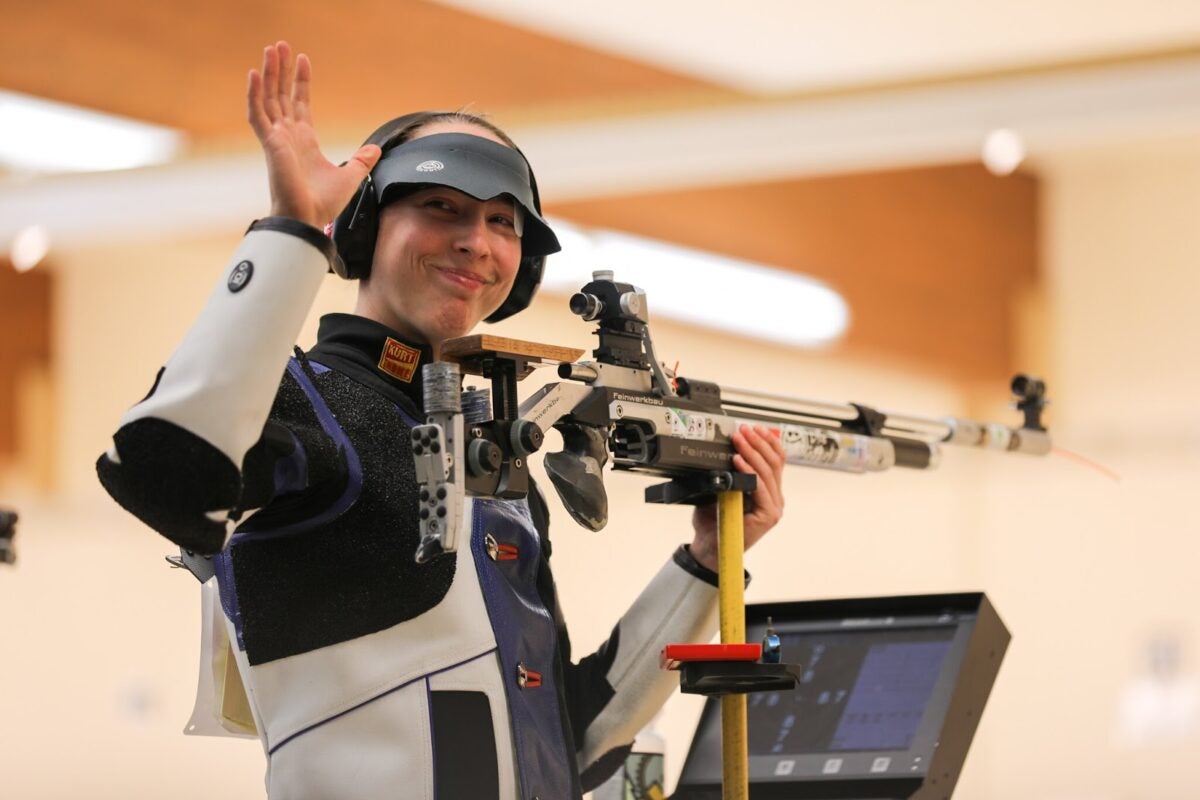 The seasoned shooter is slated to compete in the women’s 3×40 rifle event – three positions, 40 shots each. That’s standing, sitting, and prone – all at 50-meters away. She also made the Olympic team as an alternate in the air rifle event, pictured above.

“The target isn’t moving, so we try to be as accurate as possible,” she said. Even the slightest change in how she stands, her sights, could throw the shot off by, well, millimeters. And in the 3×40, it’s a change that could make all the difference.

This month, she’ll be representing the U.S. and the Army’s Marksmanship Unit as she heads to Tokyo. Shooting a .22 caliber Bleiker, Maddalena comes prepped with three sights – one set for each position – three rests, and specialty-wear galore. Depending on the position, she also adds various weights and cheek pieces. Because of the length of time it takes to shoot all 120 shots, 3×40 athletes ready their entire bodies with a thick, leather-like suit, shoes with plywood bottoms so the soles are completely flat and visors to block glare.

It’s layers of gear, and a long-lasting event.

“One of the challenges for the sport is that you’re competing against yourself. The mind and the conditions can be huge for handling pressure,” she said.

Adding that keeping up a strict routine is key for her to remain in focus. By getting to the range early, she’s able to set up equipment, practice mindfulness and perform relaxation exercises, all while keeping her mind clear and heart rate down.

Maddalena’s routines aren’t just present on competition day. She trains that way most days of the week. Scheduling her shooting drills, looking at her shot data (yes she tracks where each round lands on target), physical training, carb-loading and icing her muscles — it’s all planned by the day. Much of her shooting, she said, is muscle memory. Maintaining those daily habits allows her body to do what it needs to when it matters most.

“It’s action, perform and do. You have to just do it. You can’t stop and think,” she said. “It’s almost like a dance; I’m in tune with the wind and how it affects the bullet. My mind is sharp and I can adjust. It just flows. To be able to sustain that kind of dance with the mind and the flow of the body, it’s kind of an addiction.”

Maddalena took second in the 2016 Olympic trials, when the U.S. only brought one female air rifle athlete to compete. This time around they’re taking two and she nabbed the top spot.

She began shooting at 13 in her hometown of Groveland, California and went on to compete collegiately with the University of Alaska- Fairbanks, where she also switched specialties. Formerly a service rifle shooter, she transferred to the Smallbore/three-position rifle.

“I got the realization that I could shoot internationally and go further in the sport,” she said. “I had coaches telling me that I had options, and I wanted to travel. I wanted to see new places and see how far I could go.”

A dream which she’s now made a reality. Maddalena has traveled to India, Korea and Europe many times over.

“I think that’s my favorite part of going to these different countries; you’re not just a tourist and you get to become more involved,” she said.

Soon she’ll add one more country to her checklist, as she heads to Japan as an Olympic athlete.

After earning a bachelor’s degree in Natural Resources Management, she enlisted in the Army in 2019 and joined their Marksmanship Unit. She came with an impressive shooting background: an eight-time All-American with the Alaska-Fairbanks Rifle Team, a two-time World Championship team member, and breaking two national records in 2020, at the Blackhawk Championships and the ASSA National Championships.

On why she chose such a difficult practice, Maddalena said she enjoys the pressure, and improvements over time, even if they are slight.

“I like the progression of it. It slows down incredibly once we get to the top of our game, to see that improvement and progress. It keeps you going back for more,” she said. “When I first started shooting, the scores were not even close to what you needed to win. And now I’m here to test myself amongst the best in the world.”