This is what inspired the patriotic Yankee Doodle song 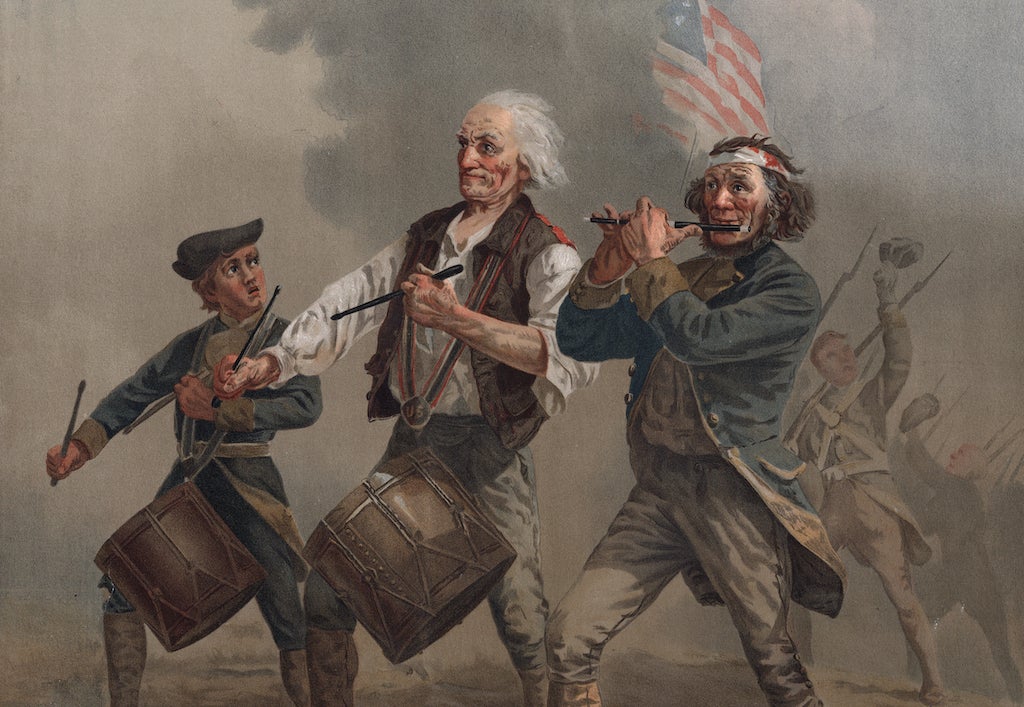 The Spirit of '76, aka Yankee Doodle. (Archibald Willard).

The origin of the famous patriotic Yankee Doodle song lies deep in the history of the United States. While it is commonly associated with the children’s classic Barney & Friends, historians claim it began as a mockery to the American troops before the Revolution. It was an old folk song, generally sang by the English soldiers and aimed at the American soldiers. The insult backfired, and now the song is sung on the 4th of July and is known by every school-going child and their parents.

Richard Schuckburg, a British doctor, is believed to have written the American version of the song. His lyrics present the American soldiers as doodle and dandy, which means country hick and conceited jerk respectfully. The exact meaning of the word doodle is unknown, explaining why historians dispute the matter. On the other hand, Yankee refers to a little Jan that was commonly used among the Dutch settlers during the period. Some historians also link the Yankee Doodle song to the Dutch, claiming that it originated from them.

The English and Americans went to war against the French and their Indian Friends from 1754 to 1763, which is why it was referred to as the French and Indian war. With the development of the colonists, new cultures and governments were formed across the oceans. The British Countrymen felt like they had enough power to succeed in fledgling America. This made the colonies in America easy to mock as they faced an enemy from the mightiest empire in the world at the time.

The Yankee Doodle song evolved with time, and the British soldiers would add new verses from time to time. However horrible the mockery was, the people who were being ridiculed took the song positively, owned each word and transformed it into a source of pride for the Americans. As the American soldiers defeated the British soldiers during the Revolution, they also took control over the Yankee Doodle song and started singing it as an anthem to flex on their English adversaries. Legend has it that when the British army teased Americans with the song, they marched along rural roads in Lexington. While on their way back to Boston, the Americans revolted and attacked the British along the route.

Upon initiating the attack, some British soldiers fled, while others were filled with rage because they did not expect an attack from people under their command. They, therefore, set fire on houses in the nearby villages, leading to deaths and thousands of dollars in losses. The colonial militiamen sang the Yankee Doodle song to the British soldiers as they retreated to mock them. It was as if the Americans were showing the English that the Yankee Doodles were now more powerful. This was when the American soldiers realized the power in the song’s words.

Yankee Doodle was sung for hundreds of years before being made an official song in the United States. Due to its popularity, the Yankee Doodle song earned a few other versions from the British and the American soldiers who had now embraced the song’s words. During the Civil War, a version that mocked the Southern population was sung by the North and Union Democrats. Years later, a basketball team was named after the Yankee Doodle song, making it even more popular. Today, the song is widely available on the internet, is taught in schools, and sung on the 4th of July by patriots to signify their victory over the red coats. When the song was created, no one would have ever thought it would take such a turn and become a motivational song to many.