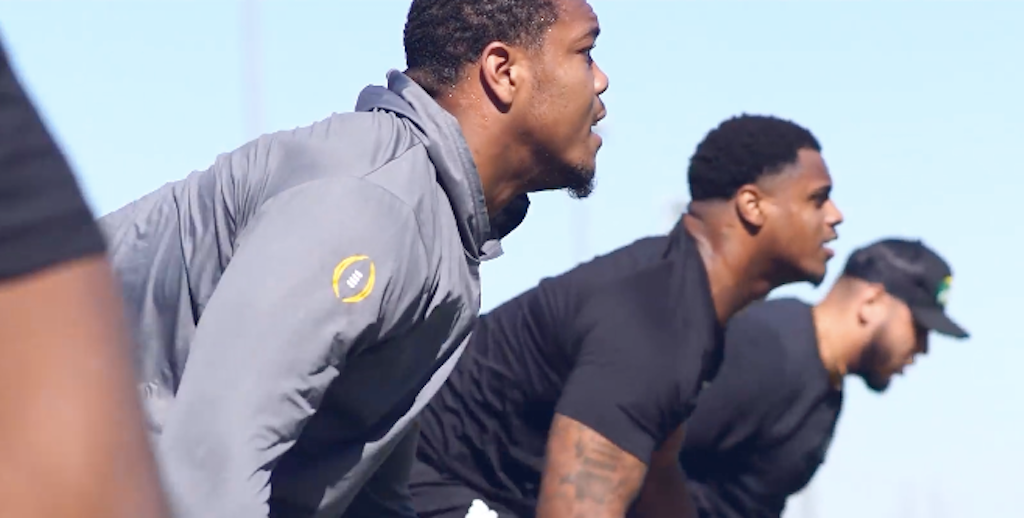 At the end of April, hundreds of young NFL prospects will wait, hearts pounding through their chests, hoping to hear their names called for a chance to achieve fame, fortune and victory on the largest stage in America. Each year, the NFL Draft reshapes the pro football landscape — pundits will analyze selections, fans find new favorites and the players are given a new city to call home. We Are The Mighty got the chance to sit down with three top draft prospects just days before their lives are forever changed.

While Devin Lloyd, Travon Walker, and Matthew Corral all play different positions, went to different schools, and have different outlooks on life, they all share a common trait: a reverence for discipline and hard work, instilled in them by a military family.

Check out our interviews with these future NFL players:

Travon Walker’s father, Stead Walker, served in the US Marine Corps. There, like all Marines, he learned the value of discipline, and it turned him into, as Travon would call it, “a hard-nosed dude.”

“He was always on me, since I was a young kid, and I really thank him for that. I feel like it molded me into the man that I am today.”

Travon Walker has long been projected as an early selection in the draft, but after posting a 4.51s 40-yard dash at the NFL Combine (not bad for a guy that stands 6’5” and weighs in at 275 pounds), there’s been talk of him going first overall. Wherever he lands, a lucky team stands to gain a good-natured, hard-working player that wants new fans to know that he’s “one of those guys that’s willing to do anything to help support [his] teammates and help [his] team win.”

“My father served in the military for 30 years… My mom was in for 10 years as well. That’s one thing a lot of people don’t know. She got out when she had me, she would have served even more.”

Growing up, everything was discipline and routine for Devin. He says, overall, it just made him a better person — but it takes more than discipline alone to end up being named First-Team All-American and Pat Tillman Defensive Player of the Year. Devin is a gifted athlete who wants to put in the work, physically and mentally, to be the best he can be. He credits his father, a former athlete himself, for teaching him how to be a true student of the game.

How many U.S. Marines does it take to raise a top-tier quarterback prospect? If you’re a member of the Corral family, you might say upwards of 8. Marine blood runs deep in the Corral family — his grandpa, his father, his older brother and several uncles and cousins are all active duty or retired USMC and the cultural impact is obvious when you ask him about his approach to football:

“It all comes full circle… They taught me the way they were taught in there, and it made me disciplined enough to get done what needs to get done, but still not be content.”

Corral enters the draft coming off of a fantastic season with Ole Miss where he threw 20 touchdowns (and just 4 interceptions) and notched another 11 on the ground. He currently shares the school record for most touchdowns scored in a single game (7). We’ll be listening for a chorus of Oorahs when his name is called on April 28!

This year’s draft promises to be a good one, with plenty of amazing talent. In the most competitive league in the world, it’s great to see the military community represented — and it’s no surprise considering the sheer volume of hard work it takes to even step foot in the door. We Are The Mighty will be keeping an eye on these newcomers as they leave their mark on the NFL!

This article is sponsored by USAA, Official Salute to Service Partner of the NFL.