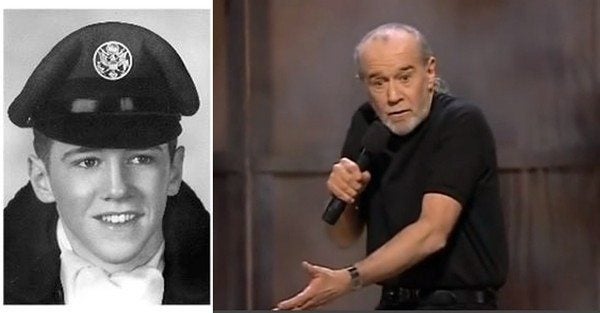 The military has built generations of outstanding citizens who have been leaders, entrepreneurs, and hard-working members of their communities. But we can also thank the military for the rise of some interesting pop culture phenomenon, from stand-up comedy to Dr. Seuss.

We found nine examples with some surprising roots in military service, detailed here. Have any more? Let us know in the comments.

Joseph Heller served as a B-24 crewman in World War II, and his experiences with dealing with unreasonable officers and the overall futility of war became the basis for the legendary novel Catch-22.

In many ways the novel was ahead of its time. The movie Catch-22 was released over ten years after the book was originally published, when the American public was more ready for irreverent portrayals of military life due to the attitudes that surrounded the Vietnam War.

Stand Up Comedy for the Masses

George Carlin was an Air Force radar tech stationed a Barksdale Air Force Base in 1954 when he started working as a DJ at a local radio station on the side. What made him popular on the airwaves made him a problem to his chain of command, and his wise-ass attitude got him court-martialed three times and earned him the official label of “unproductive airman.”

Carlin later said that as far as his military service went, he was most proud of barely avoiding getting a dishonorable discharge.

Kurt Vonnegut was a private in the U.S. Army when he was taken prisoner by the Germans during the Battle of the Bulge. “Bayonets aren’t much good against tanks,” he later said.  He was taken to Dresden and made the leader of his group of prisoners because he spoke some German.

He was there when Dresden was firebombed by allied bombers and said that the aftermath of the attack on the defenseless city was “utter destruction” and “carnage unfathomable.” The experience was the inspiration for his famous novel, Slaughterhouse-Five, and is a central theme in at least six of his other books.

Harvey Milk served as a diver during the Korean War, remaining a closeted homosexual primarily due to the attitudes of the shipmates who surrounded him.

When he left the Navy as a lieutenant (junior grade) he was tired of hiding his true self, and he started down a path that eventually took him to the Castro District in San Francisco where he led the first national gay rights movement.

Jack Kerouac joined the U.S. Merchant Marines in 1942, and in 1943 joined the U.S. Navy, but he served only eight days of active duty. The medical examiner reported Kerouac’s military adjustment was poor, quoting Kerouac: “I just can’t stand it; I like to be by myself.”

Two days later he was honorably discharged on psychiatric grounds. Kerouac’s military failure eventually led him to San Francisco where he joined Alan Ginsburg, William S. Burroughs and other writers to become the spiritual leaders of “The Beat Generation,” the first creative influencers to widely suggest that dropping out of normal American society was a viable option.  Kerouac is best known for his book On the Road.  (Source: The Smoking Gun)

While the facts surrounding his war record are disputed, it’s true that L. Ron Hubbard was a U.S. Navy officer during World War II.  In spite of his claims to being wounded in battle, the Navy has no official records to document it.

According to U.S. Navy records, the majority of Hubbard’s experience is marked by poor performance, poor evaluations, no record of any combat experience, and Hubbard over-inflating his medical conditions to avoid any theater of war. Critics say Hubbard sensationalized his military record in order to aid in launching Scientology.  (Source: The New Yorker)

Jimi Hendrix had a run-in with the law over stolen cars that led to a choice: he could either spend two years in prison or join the Army. He enlisted on May 31, 1961 and was assigned to the 101st Airborne Division.  But he wasn’t a model soldier.

His CO at the time said, “His mind apparently cannot function while performing duties and thinking about his guitar.” Hendrix was discharged early as his problems were judged to not be treatable by “hospitalization or counseling.” An alleged ankle injury during a parachute jump showed Hendrix the door with an honorable discharge. The benefit of dental care while on active duty came in handy later in his musical career when he made playing with his teeth one of his trademarks.  (Source: Military.com)

As World War II erupted, Theodor Seuss Geisel was a political cartoonist for a left-leaning New York newspaper and highly critical of isolationists like Charles Lindberg.

He joined the war effort officially in 1943, and was made the commander of the Animation Department of the First Motion Picture Unit of the United States Army Air Forces, where he wrote films that included Your Job in Germany, a 1945 propaganda film about peace in Europe after World War II; Our Job in Japan, and the Private Snafu series of adult army training films. His war experience motivated him to create a more gentle world:  the Dr. Seuss series of books.

The legendary star of movies like “Casablanca” and “The Maltese Falcon,” Humphrey Bogart served in the U.S. Navy during World War I.

He was injured while on assignment to take a naval prisoner to Portsmouth Naval Prison in Kittery, Maine.  While changing trains in Boston, the handcuffed prisoner asked Bogart for a cigarette and while Bogart looked for a match, the prisoner raised his hands, smashed Bogart across the mouth with his cuffs, cutting Bogart’s lip, and fled. The injury affected Bogart’s speech, giving him his trademark lisp that wows movie buffs to this day.  (Source: Wikipedia)