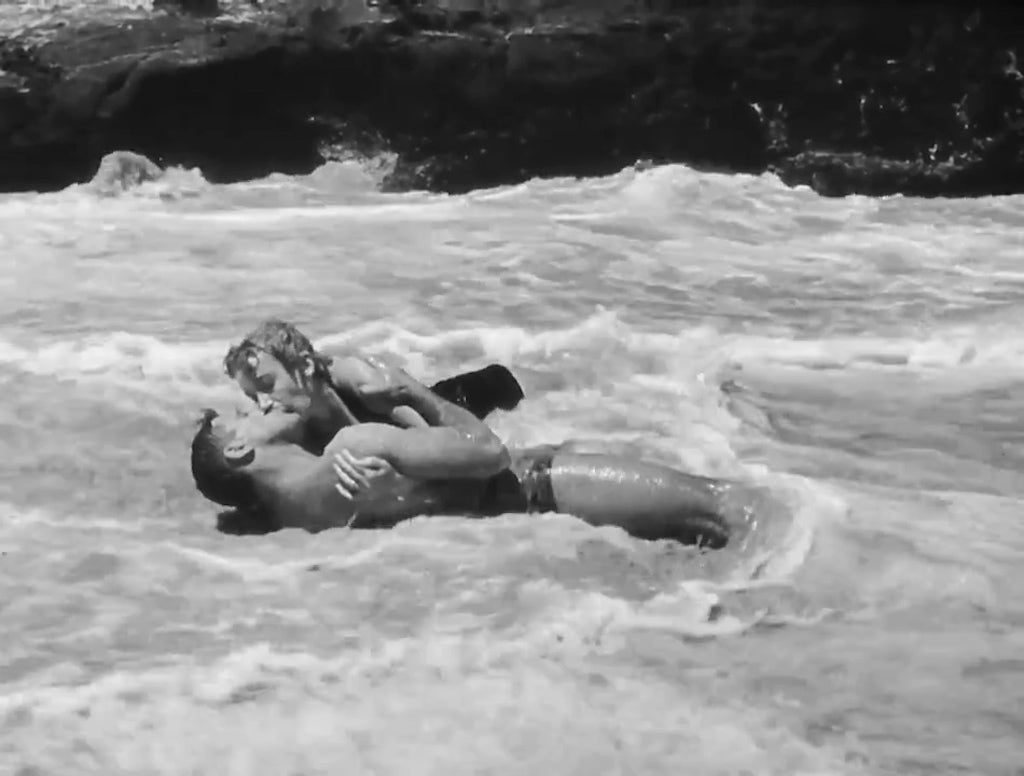 Burt Lancaster and Deborah Kerr from the film From Here to Eternity.

Burt Lancaster was one of the most iconic movies stars of his day due to his natural ability for acrobatics, military discipline and controversial stance on social issues. He was also a WWII veteran who went on to make films that represented the military in a realistic way. Burt Lancaster is an Academy Award winning actor with over 200 credits to his name. One of the most common gripes in the veteran community when it comes to entertainment is that the details matter and are often overlooked. He created his own production company to push forward and achieve his dreams with full creative control.

Burt Lancaster made his career on his ability to emote across a wide range of emotions. He was one of the stars whom would embody the strong but sensitive type. He grew up in a house hold with four other siblings in Manhattan. and parents that had a tough New Yorker outlook on life. He showed promise and talent as a high school athlete.

After he graduated from DeWitt Clinton High School in New York City in 1930, he spent two years in college at NYU on an athletic scholarship before dropping out and joining the circus with his childhood friend Nick Cravat.

“I walked out of class one day and I never went back.”

His high-rise dreams came to a stand still when he encountered an injury while working as an acrobat. However, he was still eligible for service in the military and WWII was in force.

Burt Lancaster enlisted December 26, 1942, out of New York City and shipped out to boot camp a week later on January 2, 1943. According to his Enlisted Record and Report of Separation, Lancaster spent the majority of his career with a two year deployment abroad. He spent time in Naples Foggia, North Appenines, Po Valley, and Rome Arno as an Entertainment Specialist. His military service ended at the convenience of the Government AR 615-365 and RR 1-1 demobilization. In layman’s terms: the war ended.

Mr. Lancaster had a lot of firsts; he was a pioneer in the film industry and was not afraid to lead from the front. When he created his production company Hecht-Hill-Lancaster he would go out of his way to produce movies that voice his social and political opinions. If a film meant a lot to him but it would be in financial trouble, he would open his wallet and eat the difference. His outlook on life that it is always worth it to take the risk but be prepared if it doesn’t work out.

For Mr. Lancaster the juice is worth the squeeze because he got his first big break when he was cast in the Broadway play A Sound of Hunting.

He broke into films two years later with The Killers with Ava Gardner.

The majority of his roles throughout his career were for the silver screen. However, he did make his first appearance on Sesame Street in 1969.

From Here to Eternity

Mr. Lancaster starred in the 1963 film From Here to Eternity based on the best selling book by James Jones. It’s a story about the days leading up to Pearl Harbor and forbidden love between the captain’s wife and betrayal. The film has a lot of scenes that are famous from this film. Another legendary quote from this film is, “I’m married to the Army,” which is recited by at least one person in your platoon planning a break up.

When I was taking a class called Topics in Film Studies, the entire class was essentially Topics in Burt Lancaster because he was in so many films. At least once a week that semester I found myself self thinking ‘that was him!?’

If the story of a group of soldiers tasked with saving and retrieving all of Europe’s artistic national treasures sounds like it’s something out of The Monument’s Men is because it is. They’re the exact same story but Burt Lancaster’s version takes more artistic liberties, I’ll admit.

However, don’t judge a book by it’s cover. Just because this film, as most from his early-mid career, are filmed in black and white doesn’t mean they’re boring. Burt Lancaster does all of his own stunts and those explosions and practical effects are real. The destruction of the rail yard is real too.

I wanted all the realism possible. There are no tricks in this film. When trains crash together, they are real trains. There is no substitute for that kind of reality.

Burt Lancaster didn’t just portray masculinity on the screen but he lived it. He had a staff of people who challenged him yet made things happen. This veteran was a hard charger.