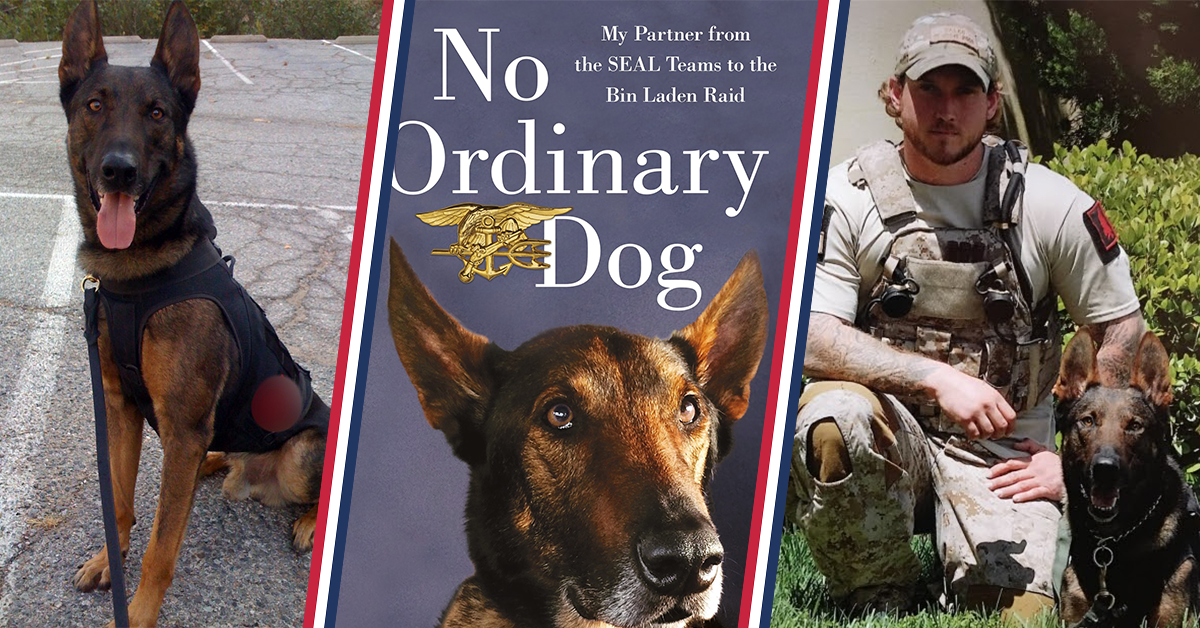 In 2008, Navy SEAL Will Chesney was introduced to the SEAL canine program, a team of four-footed recruits tasked with saving soldiers’ lives. What Chesney did not realize at that moment was that his canine partner, Cairo, would become instrumental in saving his life both on and off the battlefield.

Through the course of the next couple years, Chesney and Cairo forged an impenetrable bond.

“A military working dog must be a fighter first and foremost,” Chesney told We Are The Mighty. “We have a saying, ‘Dogs have a switch on or off mode,’ [so when you] put their vest on, they know they’re working, turn it off, they’re playful. You could turn it off, [and] Cairo was a family dog. He got attacked by my girlfriend’s mom’s bulldog and got his arm sliced up. And he didn’t do anything, [but] as soon as you put on his vest, he knew it was time to go to work and was always happy to go to work.”

During a mission in 2009 that involved heavy firefight with insurgents, Cairo was shot.

“I remember seeing him drop and I thought he was dead,” Chesney said. “I was devastated, but we had to continue the mission. I got to him, I was able to go and check on him fairly quickly. A lot of dogs don’t make it when they get shot, unfortunately. I got to him and carried him, as I was getting Cairo’s medical kit out, a medic came over. We got to him immediately considering the circumstances and a teammate saved his life.”

Cairo was not expected to redeploy, but on May 2, 2011, Chesney and Cairo were part of the team of two dozen Navy SEALs who touched down in Pakistan and descended upon Osama bin Laden’s compound in what would come to be known as Operation Neptune Spear.

“For us, it was business as usual,” Chesney explained. “We conducted a little more training than normal, we’re always conducting training, being prepared for anything. We knew that the stakes were higher and there was definitely a lot more energy, because of who we were going after. A lot of good people put in a lot of hard work, they were pretty confident. Cairo always fed off everybody’s energy. Your emotions run up and down the leash. If you’re mad, the energy is going to run down that leash. For Cairo, it was just another day at work.”

After the successful mission in eliminating bin Laden, only one hero’s name was released — Cairo, Belgian Malinois. Upon the team’s arrival home, President Obama awarded each team member, except Cairo, a silver star. In the wake of the Al Baghdadi raid, it’s something the president has brought up. Currently service dogs are not entitled to military awards, and that is why Cairo never received the Silver Star. It’s also why Cairo doesn’t have a trident pin like his two legged teammates.

Post-mission, life went on for Chesney and he deployed again, but this time without Cairo. A grenade blast in 2013 left him with a brain injury, PTSD and the inability to participate in missions.

While medicine eased the pain, the one place Chesney found true comfort was alongside Cairo, who he visited as often as possible. When Cairo was officially retired, Chesney was there, ready to sign the adoption paperwork to make it official.

“I never thought I would write a book, but there were some articles I had seen that weren’t factual,” Chesney shared. “[Operation Neptune Spear] was the biggest mission in history and Cairo was a really good dog. I thought, ‘Why not write a book about my dog?’ I wanted to get the true story of Cairo out there.”

Chesney penned No Ordinary Dog, the factual story and timeline of Cairo and his work, their relationship, and Chesney’s own personal struggles with mental health.

“If you step back and think about it, the night Cairo got shot, he saved guys’ lives,” said Chesney. “And then I got out and he saved my life. And now I’m using his stories to save more lives. If Cairo can help someone in some way, that could be great and by using the platform to talk about some of the issues I went through, [I’m] hopeful it would inspire others to reach out.”

In his book, Chesney writes,

“I share this story not because I seek the spotlight — indeed, I have always withdrawn from its glare — but to honor my fellow soldiers, including a multipurpose canine military dog named Cairo, who was in many ways just as human as the rest of us. We fought together, lived together, bled together. Cairo was right by my side when we flew through Pakistani airspace that night in 2011. He was an integral part of the most famous mission in SEAL history. After nearly a decade of pursuit, he helped us get the ultimate bad guy, and he was no more or less vital than anyone else on the mission.

But the story doesn’t end there, and it doesn’t end on a high note. It never does with dogs, right? Someone once said that buying a dog is like buying a small tragedy. You know on the very first day how it all will turn out. But that’s not the point, is it? It’s the journey that counts, what you give the dog and what you get in return; Cairo gave me more than I ever imagined, probably more than I deserved.”

Adds Chesney, “There is something uniquely American about a man and his dog. This is not a SEAL book, and it’s not a dog book. It’s a story about friendship.”