War Brides: Stories of love, hope and sometimes, regret - Part I - We Are The Mighty 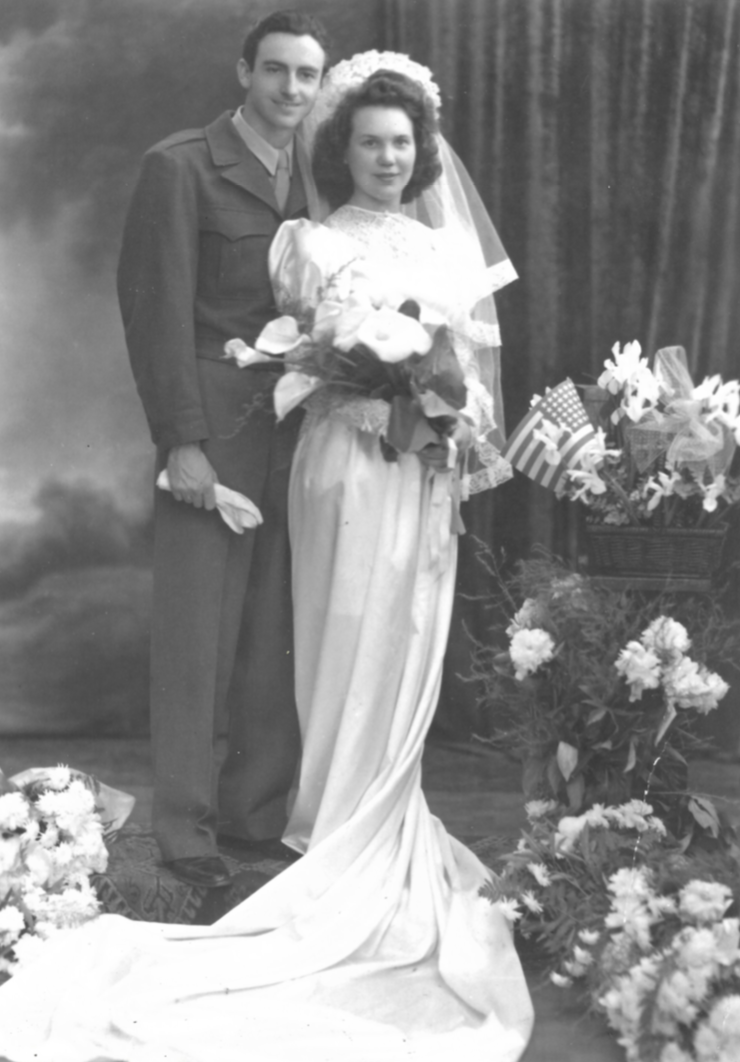 I was born in Belgium, in Liège. I lived in a suburb, on a high plateau that overlooked the city. I had family that lived in the countryside, in the Flemish part of Belgium, so I knew Flemish. I also studied German because I was worried about the war coming, which started when I was about 16 years old.

I remember when I was a young girl and the Germans were coming into the city. They would crawl up the hillside with rifles in their arms, and the kids who were at the top of the hill would throw clumps of grass or rocks to try to dissuade the Germans from coming up the hill.

One soldier came into my parents’ house because he was hungry. My father said, “Come in the back and you can eat something.” However, the German wouldn’t eat anything unless my dad ate the same thing with him.

My dad worked on the streetcar system where he was a conductor, and he got me to work there as well. I was one of the people in the back who moves the electrical lines to the next one over. I also worked in the garage getting things started, moving the trolleys onto the line. I was tough.

I met my husband when the Americans came in. We went to the movies, my mother and I, and he was on the other side of the road. He looked at me and then came over and presented himself. That was it. Then we started dating.

He was an American soldier, so he spoke only English. We had things in common because I was a nurse working in the Belgian hospital and he was an American working in the American military hospital. So we had a connection in that regard, but I think the main connection had to do with the way that I looked and the way that John looked. He was good-looking, so I was willing to date him.

He wanted to get married right away. He had to go approach my father to ask him if he could marry me. And he was, of course, very reluctant, but I would not be dissuaded.

Once we decided to get married, he did a very unusual thing for an American soldier: he had my sister take all my measurements and sent them to his sister who lived in Maine, and he asked her to pick out a wedding dress for me and send it to Belgium. He also paid for the flowers and things like that so that we could have a beautiful wedding, which I think is pretty unusual.

At the time, I said to him, “I’m Catholic. If I do get married, I want to be married in a church.” So he said, “Well, I’m Catholic too.” I said, “Well, tell me a few things about the Catholic religion.” And he couldn’t tell me anything! He only knew how to do the sign of the cross like a Catholic — that’s all he knew. So he took a course in the Army to become a Catholic for me.

We went off for a two-week honeymoon in the countryside of Northern Belgium. But because the war was still going on in Japan, he was then transferred there. I was only a few months pregnant when he got sent off to Japan.

The war ended before he got there, so he was sent back to the United States and released. He had made arrangements for me to come to the United States. But when my dad found out I was moving to America, he passed out. It was tough on the family, but my husband had made a promise that we’d be coming back to visit. Of course, that didn’t quite happen as well as my mother had hoped. It was tough on my parents, which made it hard for me.

I went through the Ellis Island immigration area when I arrived, and I spent a night in New York before getting on a train. It took five days to get to Alabama. I didn’t recognize my husband when I arrived because he had gotten very sick and lost so much weight.

It was a different way of life for me because I grew up in the city, had season tickets to the opera and was an art student in college. Now I was in rural America facing an outhouse: there was no indoor plumbing, no indoor running water. We ended up moving into a chicken coop that my husband covered inside with paper so that nobody could see in.

I was also in a dry county, and I had a bottle of wine that I brought from Europe. I put it in the window to cool, and my husband saw it when he was coming home, and said, “You’re going to get us arrested! You’re not allowed to drink wine in this county!” So I said to him, “Why, are we in Russia?”

I had a couple of sisters-in-law who were very good to me. My mother-in-law as well. So they tried to accommodate me and teach me English, and my husband would give me homework every day to study the language. Of course we didn’t have TV or anything, but I would learn through the people who I met.

My English wasn’t good — there were a lot of hand signals at that time! It was difficult to learn, but I credit my ability to learn to the fact that I knew Flemish and German. There are a lot of French words that are English words. Between those three languages, I felt that I had a leg up on learning the English language.

Many times, people would call me an immigrant and say, “You’ve got an accent, go back to your country.” I remember those kinds of comments, but I could shake them off. They didn’t bother me. I was pretty surprised by the racial problems I confronted in Alabama. I couldn’t understand that kind of racism because I wasn’t used to that in Belgium.

We lived in Alabama for about a year or so. But because I was so unhappy with the lack of city life, and there was no work down there for my husband, we went up to join my sister-in-law in Michigan and get a job at one of the factories.

My husband worked bartender jobs and we lived in terrible housing, but he ended up getting a job at General Motors. One day, I went off with some friends on a Sunday drive and I saw a sign that said “GI homes for $5.” So I gave the guy $5, went home and told my husband, “Oh, I bought a house today!”. He said, “You bought a house?! Alice, do you know what you’re saying?” I said, “Yeah, I bought a house.” So we took a bus over there and we went to see the guy with my husband’s discharge papers, and we got the approval for buying the house! This is the house we’re still in today, since 1950.

We lived right on the main line for a streetcar in Detroit, so we were 10 minutes away from downtown. My daughter was born two years after my son, and I would take my children into the city frequently. In Detroit, I felt more acclimated to living in America, once I got into the city routine. I’ve always been a city girl, that’s just how I roll!

I’ve been back to Belgium a few times since. I got married in 1945 and went back in 1950. Then in 1964, when my son graduated from high school, I took him back to meet his relatives in Belgium, because he was just a baby when he left there. The last time I was there was in the early 2000s.

I still manage to speak French — je parle toujours le français ! I have a small circle of friends, and we go to lunch and chitter chatter away speaking French. I had other friends who were from Belgium, but they have since passed. I still carry the Flemish language within me, but don’t have much of an opportunity to speak it to anyone around here.

I’ve noticed with other war brides that they were very eager to be accepted and to acclimate into society, so they don’t necessarily talk much in their native language. I just went along with everything that was happening here. I didn’t try to change anything. I just helped myself and learned English. People would always say, “Oh, you have an accent,” and I would reply, “Yeah, vous parlez français? Do you speak French? That’s why I’ve got an accent!”

For people who are considering moving abroad to marry someone, I would say, “Join the club!” If you love somebody, you want to do anything you can to be with them.

The War Brides series is brought to you by Babbel. Babbel has now launched a discount for those involved with the military and veterans, as well as their relatives, as a thank you for their service. It is available here: https://welcome.babbel.com/en/military-discount/