5 hot facts about ‘Greek fire’ - We Are The Mighty 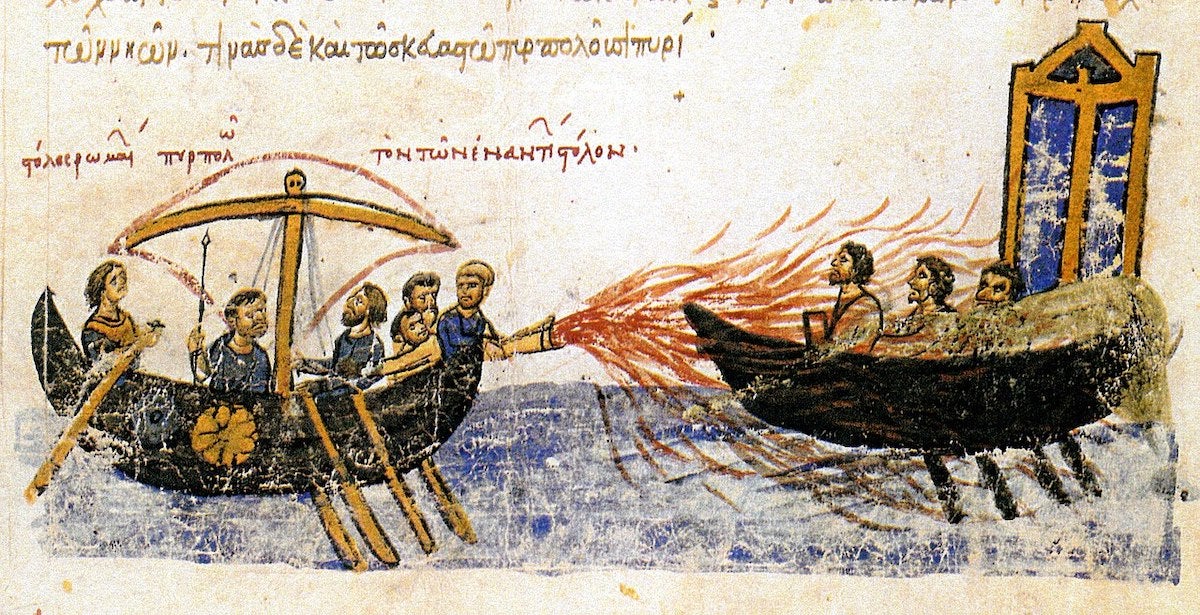 In the late seventh century, the Byzantine Empire faced a new kind of threat. After years of exhausting warfare with the Sassanid Persians, the Empire was caught off guard by the first Muslim conquests. Even the imperial capital of Constantinople was not safe. But in the 670s, a Syrian scientist named Kallinikos appeared with a new invention that could turn the tide in the Byzantines’ favor: Greek fire. Here are 5 facts about Greek fire to set your curiosity alight.

“Greek fire” was actually a liquid mixture, one so flammable that supposedly it could even catch fire spontaneously. Greek fire was created for naval warfare, so the Byzantines could set their enemies’ ships on fire. The mixture was stored in jars and pots that could be launched at enemy ships, but the Byzantines found yet another means to weaponize it. The Empire learned to pressurize Greek fire and launch the mixture out of a set of tubes, like a flamethrower, at its enemies.

2. It even burned on water

Greek fire was not the first incendiary weapon in the ancient world. Flaming arrows had been used for centuries, as well as other flammable substances that could be thrown at or on the enemy. Most thermal weapons, however, were ineffective in water. Greek fire was different. One of the qualities that made Greek fire so devastating, especially in naval warfare, was that the liquid mixture would continue to burn even on water. This made Greek fire a must-have in naval battles, and the Byzantines exploited this weapon on the water for centuries.

3. Its creation was a state secret

Emperor Romanos II once explained that there were three things the Empire must never allow to fall into the hands of its enemies: the imperial regalia, an imperial princess, and the recipe for Greek fire. His father, Constantine Porphyrogennetos, even argued that the recipe for Greek fire had been delivered to Constantine I, the founder of Constantinople, by an angel of God. The recipe was kept as a state secret for centuries, and all that time, not one of the Empire’s enemies was able to steal the recipe. Even though throughout the years Byzantine ships carrying Greek fire were captured by its enemies, none of them were able to replicate the mixture or figure out the Byzantines’ machines for weaponizing it.

4. It saved the Byzantine Empire

Greek fire was instrumental during the First Arab Siege of Constantinople between 674 and 678, when it helped repel the Muslim ships that surrounded the city. Only forty years later during the Second Arab Siege in 717, the Byzantines used Greek fire to decimate the Muslim fleet, defending the city for a second time. Throughout the Middle Ages the Byzantines used Greek fire against a variety of enemies, including the Saracens and the Slavic ancestors of the Russians. Even though their enemies were occasionally able to resist the effects of Greek fire, for as long as the Byzantines possessed this weapon, the Imperial navy was always a force to be reckoned with.

5. We still don’t know how it was made

In the year 1203, during the Fourth Crusade, the Crusaders put Constantinople under siege. Despite this serious threat to the imperial city, no sources from the siege describe the use of Greek fire against the Crusaders. No one knows exactly why, but it seems that the use of Greek fire eventually disappeared, due either to the recipe being lost or the Empire losing access to the resources required to produce it. The Empire kept the secret to the grave; modern chemists have speculated about the recipe for Greek fire, but we have never been able to replicate it perfectly. Through Greek fire, like the Byzantine Empire itself, is no longer with us, it continues to burn bright in our imagination.