Discovering the North Pole: Who got there first? - We Are The Mighty

Discovering the North Pole: Who got there first? 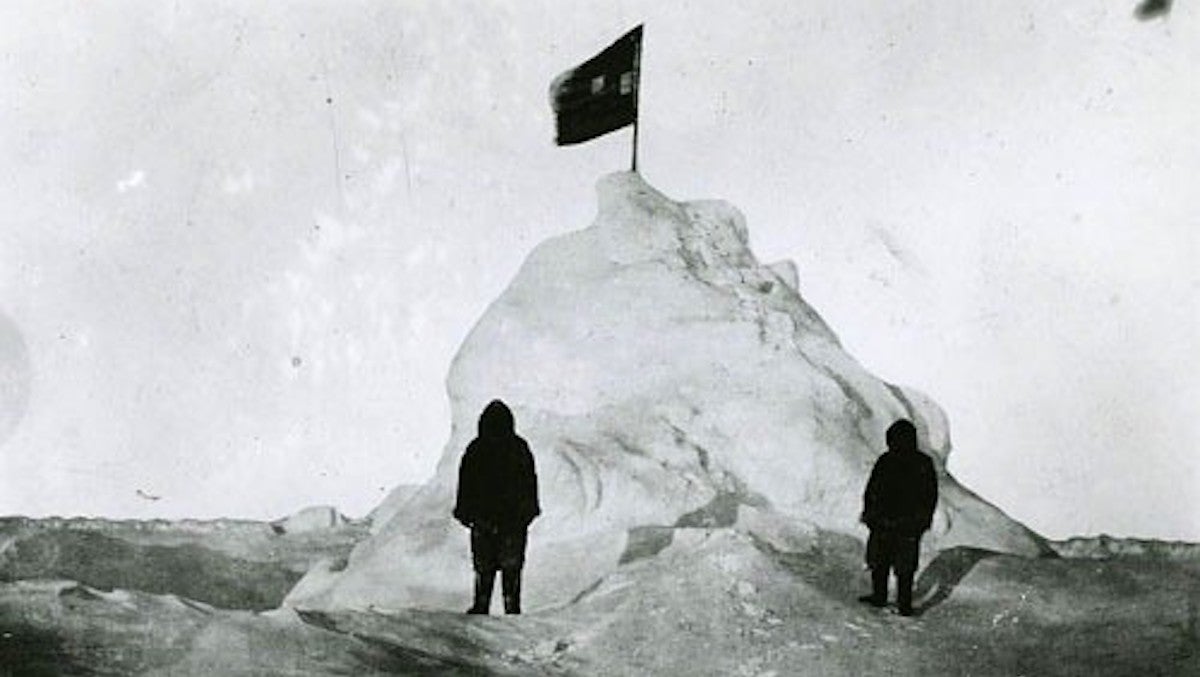 Since the dawn of humanity, people have been as competitive as hell. We want to be the best. The first. While most of the world has already been explored today, the tallest peaks, darkest caves, and iciest tundras were once undiscovered mysteries, and humans were obsessed with discovering every corner. Before the 1900s, the North Pole was one of those untouched corners. All early attempts failed, upping the allure of the so-called top of the world.

In 1909, that changed. First, US Navy engineer Robert Peary claimed to have reached the pole on April 6th of that year. But shortly after, an American explorer named Frederick Albert Cook declared he had actually reached the pole first, nearly a year prior. So who was right?

The Race for the North Pole Was Cutthroat and Controversial

The North Pole is both barely habitable and intensely difficult to reach. Situated in the moddle of the Arctic Ocean, accessing the pole is impossible without first traversing treacherous, unpredictable sea ice. Every attempt before the 20th century fell flat. William Edward Parry, a British Naval officer, tried but didn’t even get close. An American explorer named Charles Hall tried and failed in 1871. Over two decades later, a pair of Norwegian explorers, Fredrik Hjalmar Johansen and Fridtjof Nansen, got painfully close before having to return home defeated. An Italian explorer got marginally farther before giving up as well.

Then came Peary and Cook. They began as friends, but their differences were pointed. Peary was born in 1856, and he was deadset on achieving fame. His expeditions, like most, relied heavily on the assistance of the locals in each region he explored, but he treated them more like chess pieces than friends. He went as far as to dig up graves to sell to New York’s Museum of Natural History. Cook, born nearly a decade later in 1865, was an ambitious, young doctor with a more modern approach. He was genuinely interest in the lives of indigenous peoples, diving into their culture and learning their languages.

The two traveled together to Greenland once, but Cook turned down a second invitation. Peary wanted him to sign a contract preventing any accounts of the expidition from being published before Peary did it first. Left with a bad taste in his mouth, Cook broke contact with Peary for several years. They were reunited when Peary was lost in the Arctic and Cook was called upon to rescue him. Rescue him he did, treating him for scurvy and several other conditions. On a later expedition to Greenland, Peary badly broke his leg and Cook stepped in once again to treat his injury. Still, the two were very different men. Instead of colleagues, they were competitors.

Peary, one of the last imperialistic explorers, would have died for fame.

In a message to his mother about his longing to conquer the elusive North Pole, he wrote, “My last trip brought my name before the world; my next will give me a standing in the world….I will be foremost in the highest circles in the capital, and make powerful friends with whom I can shape my future instead of letting it come as it will….Remember, mother, I must have fame.”

Peary did travel to the Arctic once more, but whether or not he made it all the way to the pole is highly disputed. According to him, he made it to the North Pole on April 6th, 1909, but he straight up refused to share any definitive proof. According to a later review conducted in 1989 by the US National Geographic Society, the photos Peary took suggest that he did make it within eight kilometers of the official North Pole.

Even with this supposed endorsement, the truth of his claims remained controversial. Firstly, no one else on the expedition had the navigational skills to confirm or deny Peary’s reports. They did, however, mention multiple, agonizingly long detours, while Peary claimed to take a direct route. Secondly, even on his own expedition, he may not have been the first to arrive at the pole. He was joined by four Inuit men and his assistant, a black man named Matthew Henson. Henson was a skilled explorer of his own right, adventuring in the Arctic alongside Peary on seven different occasions.

Yet Peary considered himself to be superior to Henson, and was unwilling to share the credit with him. In fact, he intended to abandon Henson to reach the Pole first on his owe. He lost track of the distance, however, and according to Henson, he was livid that five others shared “his” glorious North Pole victory. He later took all the credit, and it wasn’t until Henson published a book in 1947 that he began receiving recognition for his achievements.

Whether they truly made it to the pole or not, their unopposed rule of polar discovery didn’t go unopposed for long.

Cook claimed that he reached the pole nearly a year earlier, but his evidence was unconvincing.

The daring Doctor Cook was just as keen on finding the far north as Peary was. After a Mount Denali expedition that was also shrouded in suspicion, Cook headed straight for the Arctic. He set off from Annoatok, a settlement in Greenland, February, 1908. He claimed to have arrived at the pole on April 21st, yet he didn’t make it back to Annoatok until the next spring, nearly starving along the way.

In total, they were gone for 14 months, and it remains unclear where they ended up. Cook was never able to produce convincing navigational records. According to him, he left the records in a box along with some of his other belongings at Annoatok. There, an American hunter, Harry Whitney, attempted to load the box onto Peary’s ship, the Roosevelt, Peary forbid it. The contents of that box were never seen again.

By December 1909, experts at the University of Copenhagen determined that Cook’s records were insufficient to prove he had reached the pole. Some researchers have noted that Cook’s account of the journey, which he tracked in a diary, describes the landscape with remarkable accuracy. If he didn’t reach the pole, how could he have known what it looked like?

Whoever got there first, both men were intrepid adventurers who paved the way for later, less disputable expeditions.

The true “first man to the North Pole” is nearly impossible to determine, but many have followed in their footsteps. About 60 years later, American Ralph Plaisted, along with three companions, were the first to reach the pole without a shred of controversy…by snowmobile, in 1968! Other adventurers have succeeded as well, by plane, submarine, and on their own two feet. I wonder which murderous wasteland will explorers fight over next.