The Army gave Buffalo Bill a Medal of Honor, took it away, then gave it back - We Are The Mighty

The Army gave Buffalo Bill a Medal of Honor, took it away, then gave it back 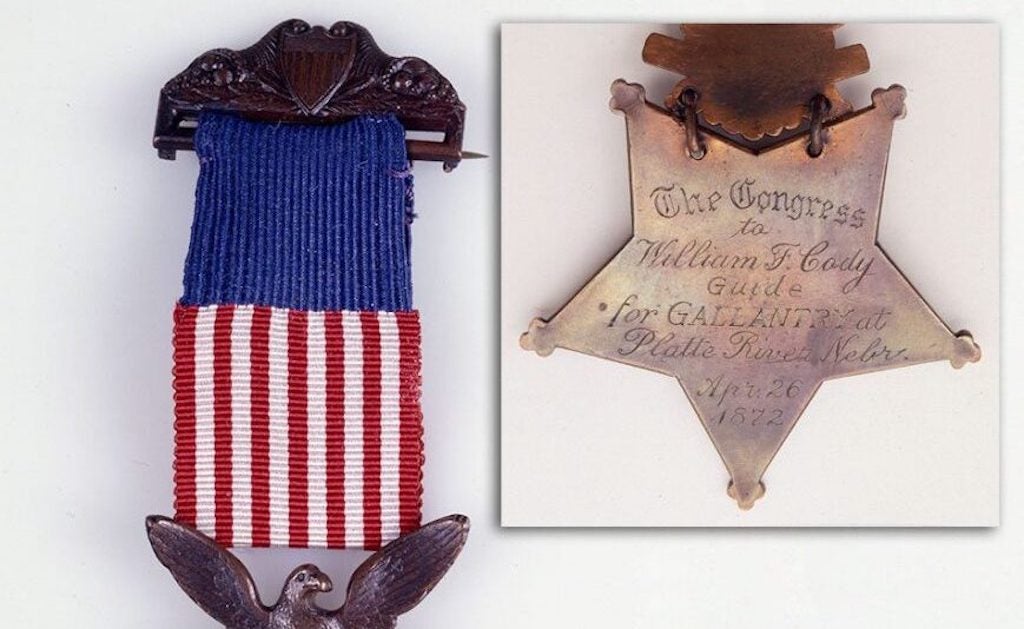 Soldiers know that the Army giveth and the Army taketh. As frustrating as it can be for modern service members who lose something like an enlistment bonus due to a technicality, the Army’s fickleness affected the legendary William “Buffalo Bill” Cody and his Medal of Honor. The man who gave the Wild West its name was awarded the medal for his service during the Indian Campaigns, but was stripped of it after his death before it was restored decades later.

Born in 1846, Cody became a rider for the famous Pony Express at the age of 15. When the Civil War broke out, he tried to enlist in the Union Army but was turned down for being too young. Instead, he helped deliver supplies to Fort Laramie in present-day Wyoming with a freight caravan. In 1863, at the age of 17, Cody enlisted as a teamster with the 7th Kansas Cavalry. He held the rank of private and was discharged two years later.

In 1866, Cody reunited with an old friend, the famous Wild Bill Hickok, in Junction City, Kansas. Hickok was serving as a civilian scout for the Army at the time and inspired Cody to do the same. Cody enlisted as a scout at Fort Ellsworth, Kansas and scouted between there and Fort Fletcher. During this period of scouting, he worked for such notable officers as Capt. George Augustus Armes and Lt. Col. George Armstrong Custer. In 1867, Cody was granted a leave of absence to hunt buffalo and supply railroad workers with meat. He reportedly earned exclusive rights to his nickname after besting fellow buffalo hunter Bill Comstock in a hunting competition.

In 1868, Cody returned to the Army as a scout and was posted at Fort Larned, Kansas. During this time, he displayed exceptional performance as a rider on a lone dispatch. Cody rode a total of 350 miles through hostile territory in 58 hours, including a brief capture and escape. He covered the last 35 miles on foot. For this achievement, General Philip Sheridan assigned Cody as the 5th Cavalry Regiment’s Chief of Scouts.

On May 22, 1872, Cody was awarded the Medal of Honor for documented gallantry on the battlefield while serving as a scout during the Indian Wars. The previous month, on April 26, Cody stealthily guided a detachment of soldiers in pursuit of a band of American Indians in Nebraska. During the ensuing engagement, he reportedly rushed out onto an active battlefield and pulled several soldiers to safety, saving their lives. This action was performed while under heavy enemy fire, and Cody’s Medal of Honor citation noted “Gallantry in action.” Later, his show, Buffalo Bill’s Wild West and Congress of Rough Riders of the World, earned Cody international fame and cemented his legacy in American history.

In 1917, Congress designated the Medal of Honor as the highest military honor that the nation could bestow. As a result, Cody’s medal and 909 others dating back to the Revolutionary War were rescinded. The War Department ruled that, because Cody and the other recipients were civilians, they were ineligible for the Medal of Honor. The law was enacted just days before Cody’s death on January 10, 1917, and his medal was revoked shortly thereafter.

Naturally, Cody’s family objected on his behalf. For decades, his relatives wrote to Congress urging that the medal be restored. In 1988, Cody’s grandson wrote a letter to Wyoming Senator Alan K. Simpson, who took up the issue. A legal brief was submitted to the Department of Defense arguing that civilian scouts were technically officers. For the purpose of retention, men like Cody were given officers’ rank and pay. Moreover, their roles as scouts regularly exposed them to combat and they were treated as highly-valuable personnel by their military commanders.

The appeal was directed to the Army Board for Correction of Military Records for adjudication. After months of deliberation, the Board concurred with the legal brief from Sen. Simpson’s office and restored Cody’s Medal of Honor in 1989. Additionally, a precedent was set that restored the medals of several other civilian scouts including Native Americans. Cody’s Medal of Honor is on display at the Buffalo Bill Museum in Lookout Mountain, Colorado.