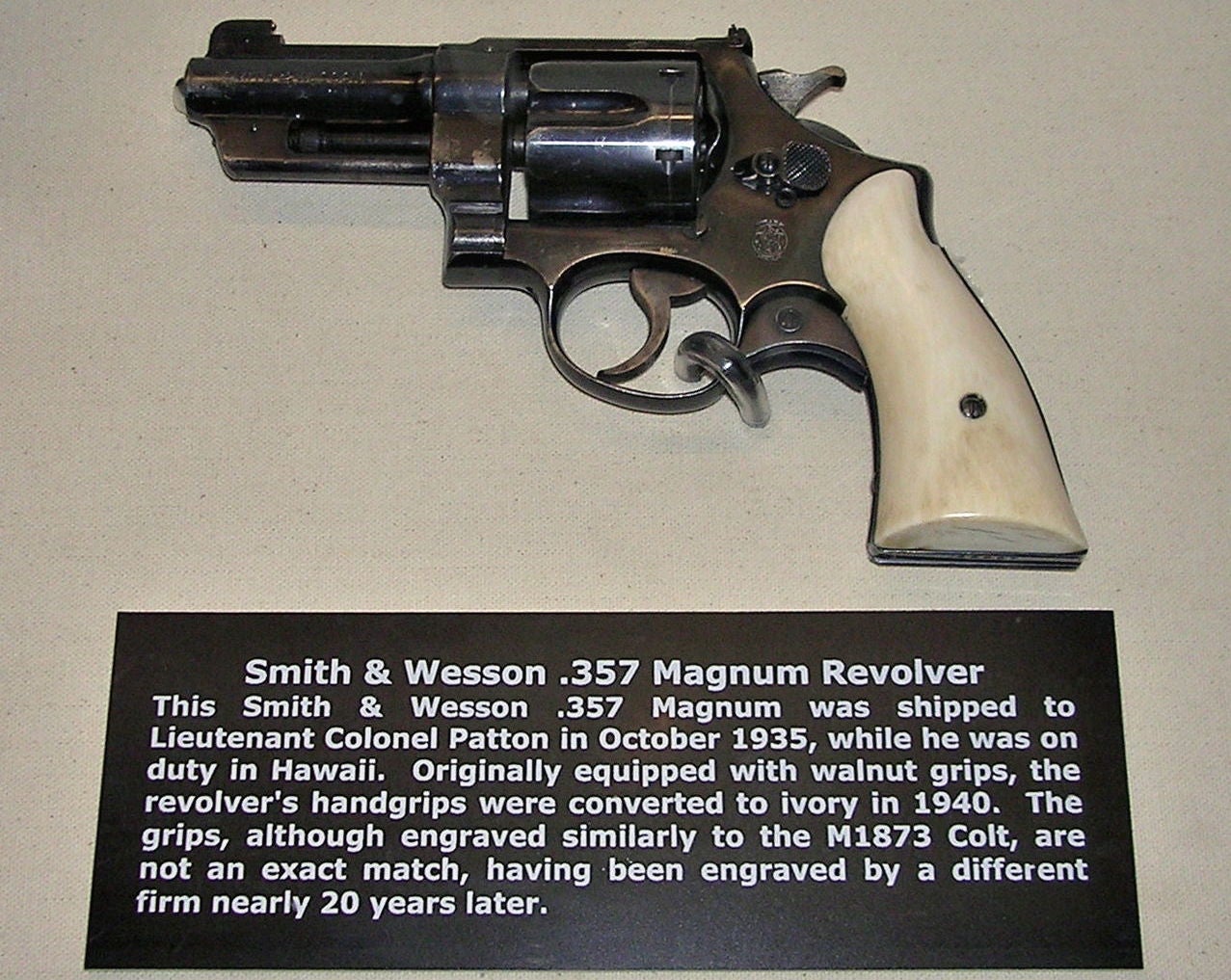 One of Patton's ivory-handled revolvers.

There’s a memorable scene in the 1970 film “Patton,” where a reporter asks General Patton about his pearl-handled revolvers. His reply was legendary – and it’s a real quote.

“They’re ivory. Only a pimp from a cheap New Orleans whorehouse would carry a pearl-handled pistol.”

The famous general really did carry ivory-handled pistols, and had more than just the two he carried onto the battlefields of World War II. General Patton was also famously asked about the pearl handles, as author Milton Perry recalled in his book “Patton and His Pistols.” The reply you hear in the movie was Patton’s reply to the question.

General officers in World War II were given so much leeway in what weapons they carried, they could pretty much take whatever they wanted. Gen. Omar Bradley carried what all soldiers would carry, the Colt M1911 .45-caliber pistol. Patton’s sidearm was more often than not his .45 Long Colt Single Action revolver, 1873 Army Model, and a .357 Magnum Smith & Wesson .357 revolver.

Patton would use the .45 for everyday carry, while the .357 Magnum was for use as a “killing gun” for the battlefield, as the general put it. The .45 was special to Patton, which he first purchased in 1916. Aside from the ornate engraving, it also carried two notches in the ivory on the side of the weapon.

As a young officer, Patton was sent to the United States’ border with Mexico as part of the Punitive Expedition. Mexican revolutionary and outlaw Francisco “Pancho” Villa sacked Columbus, New Mexico, just across the border in March of that year. In response, the U.S. Army sent a force led by Gen. John J. “Black Jack” Pershing to the border.

Pershing’s official mission was the capture of Pancho Villa, and he took around 10,000 men south to do it. A Lt. George S. Patton was one of Pershing’s aides. On Patton’s hip was his .45 revolver. Patton was very active in Northern Mexico, traveling around the area via a Dodge touring car to find food and provisions for the American force.

One day he drove up to the villa belonging to the uncle of Mexican revolutionary and Villista follower, Julio Cardenas. While at the Cardenas ranch, Patton got a sneaking suspicion that Cardenas was in the area. He decided it was time to find out.

Patton led a raid on a nearby ranch that had harbored the fugitive in the past. With three 1916 model cars driving toward the ranch at 50 miles per hour, he performed an early armored maneuver, quickly flanking the ranch and its defenders. With dust in the air, his riflemen formed up. The shooting started almost immediately.

Three men on horseback came charging toward Patton, carbines blazing, but Patton was able to shoot Cardenas off his horse. The initial charge was stopped in its tracks, but the remaining two reformed and began another. Patton shot one of their horses and a volley of gunfire from his riflemen finished all three in turn.

In a letter to his father after the gunfight, Patton wrote, “I fired five times with my new pistol and one of them ducked back into the house. I found out later that this was Cardenes and that I had hit both he and his horse.” After the battle, Patton decided it would be wise to carry a backup pistol.

The Punitive Expedition never captured Pancho Villa, but this early encounter with fast-moving vehicles was a first for the man who would direct armor engagements across North Africa, Sicily, and Western Europe less than 30 years later.