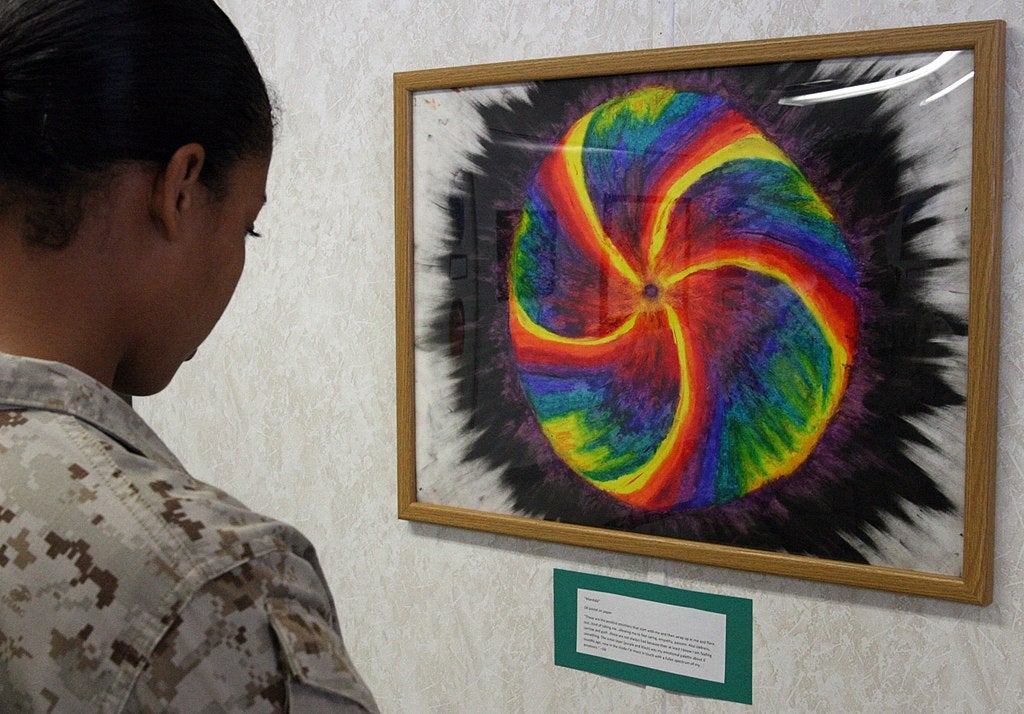 Milford, Mass., native, Pfc. Jailene Delacruz, an embarkation specialist with Marine Light Attack Helicopter Squadron 167, 2nd Marine Aircraft Wing, reads a quotation from a Marine describing the painting on the wall and what it means to them. Paintings by Marines and sailors who attend art therapy to relieve post-traumatic stress disorder symptoms were displayed at an art expo.

Shell shock was a term that Dr. Charles Myers came up with in 1916 that referred to the stress that the soldier suffered through during World War II. Initially, numerous individuals assumed that the soldiers who were fighting in World War I were in some way injured by bombs detonating close to them. However, it was not the concussion or the explosion’s pressure wave that really affected the soldiers; it was the continuous stress the battle put on them. Therefore, shell shock was rebranded as post-traumatic stress disorder (PTSD), a more accurate and accepted term.

Throughout the first World War, treatment for shell shock was varied, where soldiers frequently received only a few days of relaxation before going back to the war zone. Those with chronic and severe symptoms had their treatments concentrated on daily tasks to enhance functioning with the aspiration of helping them go back to fruitful civilian lives.

Owing to the development of weaponry and technology, the magnitude and scale of the first world war were exceptional. Civilians and soldiers witnessed the effects of shell shock, which was an immense topic for the soldiers throughout the war. Consequently, the subject became public interest back home since there were some controversial aspects.

Some Army doctors and officers rejected the reality of the condition; nevertheless, there was a psychological study done before the first world war that acknowledged similar trauma kinds. The nature and scale of the warfare throughout the first world war exposed the soldiers to highly traumatic situations.

Also, the soldiers’ unhygienic and miserable lives in the trenches led them to disease outbreaks like typhoid and cholera. They were also susceptible to injuries like trench foot which resulted in the amputation of limbs.

Moreover, traumatic experiences like massive artillery bombardments and the persistent fear of death were the causes of shell shock. Even though the term shell shock was incorporated in World War I to define early forms of PTSD, it is applied to modern extreme-impact explosives trauma cases.

Essentially 20% of the approximately 300,000 troops deployed to Afghanistan and Iraq experienced brain injuries from explosive devices and weapons. This incident prompted the U.S. Defense Advanced Research Projects Agency to begin an expensive study concerning the blast’s effects on the human brain.

The $10 million studies by DARPA showed that although the human brain stays intact instantly after low-level blast effects, the chronic inflammation next is what eventually results in numerous occurrences of PTSD and shell shock. The diagnosis of PTSD has significantly filled a crucial gap in the history of psychology. It clarifies that it results from a traumatic event a person experienced instead of personal weakness.

Veterans were a resourceful piece to the contradictory puzzle in how they gave timely insight on what PTSD is while referencing it to the entire topic of combat history. Only approximately 53% of soldiers suffering from PTSD and depression seek treatment. This is likely because they are afraid of the consequences mental health treatment will have on their job and also the stigma from their peers.

Here, the government and the military should put in the effort to encourage soldiers to be treated as leaving it unchecked will have many consequences, such as violence, self-harm, and addictions.