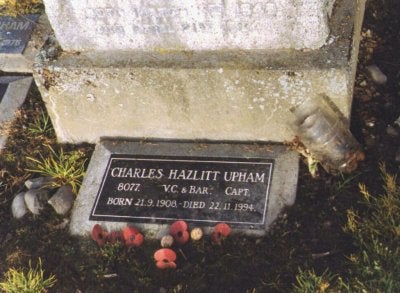 The United Kingdom’s highest award for valor in combat, the Victoria Cross, is notoriously difficult to earn. It is awarded for “conspicuous bravery… pre-eminent act of valour or self-sacrifice, or extreme devotion to duty in the presence of the enemy.”

Like the United States’ Medal of Honor, not many survive earning their nation’s highest honor. Even more rare is earning two of such medals. Since the Victoria Cross was introduced in 1857, some 1,358 medals have been awarded. Only three recipients have been awarded two.

Only one of them survived earning his second.

Charles Upham enlisted in the New Zealand Expeditionary Forces in 1939 at the age of 30. He was a seasoned soldier, a non-commissioned officer in New Zealand’s home army, then known as the “Territorial Force.” He signed on to the expeditionary army as a private, but his skills as a soldier soon saw him retain his previous rank of sergeant.

By July 1940, he was headed for Egypt and was placed in an officer’s training unit. The New Zealander’s first action in World War II was to reinforce the Greek Army in the face of an imminent Nazi invasion. That invasion came on Apr. 6, 1941, which forced the Kiwis to withdraw to the island of Crete.

It was on Crete that Upham earned his first Victoria Cross. The Battle of Crete was unique in the history of warfare in that it was led by a massive force of Nazi paratroopers. The British controlled the seas around Crete, but the Nazi luftwaffe maintained air superiority. The Nazis captured the island’s most important areas and soon they were reinforced by airlifted supplies and weapons. The British and Commonwealth forces would soon have to retreat to Egypt.

But first, 2nd Lt. Upham and his men were going to make the Nazi pay for evey inch of Crete they could.

In three separate actions, Upham destroyed four machine gun positions (often at close range), removed wounded men from the battlefield, and led his men to relieve a surrounded allied unit. Over the course of a week, he took out more than 70 enemy troops while wounded, exhausted, and suffering from dysentery. For this, he was awarded his first Victoria Cross.

He and his men retreated to Egypt, where he recovered and recuperated. He saw combat again in 1942, at Minqar Qaim and at the First Battle of El-Alamein, where he would earn his second Victoria Cross.

Here, the British and Commonwealth forces would fight the Nazis under Erwin Rommel to a draw. Now a Captain, Upham was leading a company of New Zealanders on El Ruweisat Ridge. They were part of the reserve force but soon lost communications with the headquarters. Not knowing what was happening, Upham himself went to assess the situation.

He found enemy machine gunners, which he was able to evade. Most importantly, he reestablished communications.

His unit was ordered to take their objectives at dawn on the second day of fighting, but found it was more heavily defended than they’d anticipated. His company was pitted against four machine gun nests and four tanks. Upham led the company in a flanking maneuver against the Nazi strongpoints.

Upham destroyed one of the enemy tanks on his own, taking a bullet to the arm for his trouble. That bullet broke his arm at the elbow. He then moved forward to cover the retreat of some of his men who had been cut off by an enemy counterattack. As they enemy retook the objective, he fought back as his men reconsolidated. One would think he had already earned a second Victoria Cross, but he wasn’t finished.

After being patched up at an aid post, he rejoined his unit, which again began to take heavy artillery fire, wounding him again. This time his position was overrun and he was captured. Only six men from his unit survived the battle.

Superior officers in Upham’s chain of command recommended him for another Victoria Cross for not only his actions at El-Alamein, but also his previous engagement at Minqar Qaim. Instead they rolled both events into the same recommendation to present to King George Vi.

The New Zealander recovered from his wounds and spent most of the rest of the war in POW camps, where he became known as an extreme escape risk. He eventually found himself in Colditz Castle, a prison for enemy officers from which escape was notoriously difficult.