The military-exclusive watch you don't want - We Are The Mighty

The military-exclusive watch you don’t want 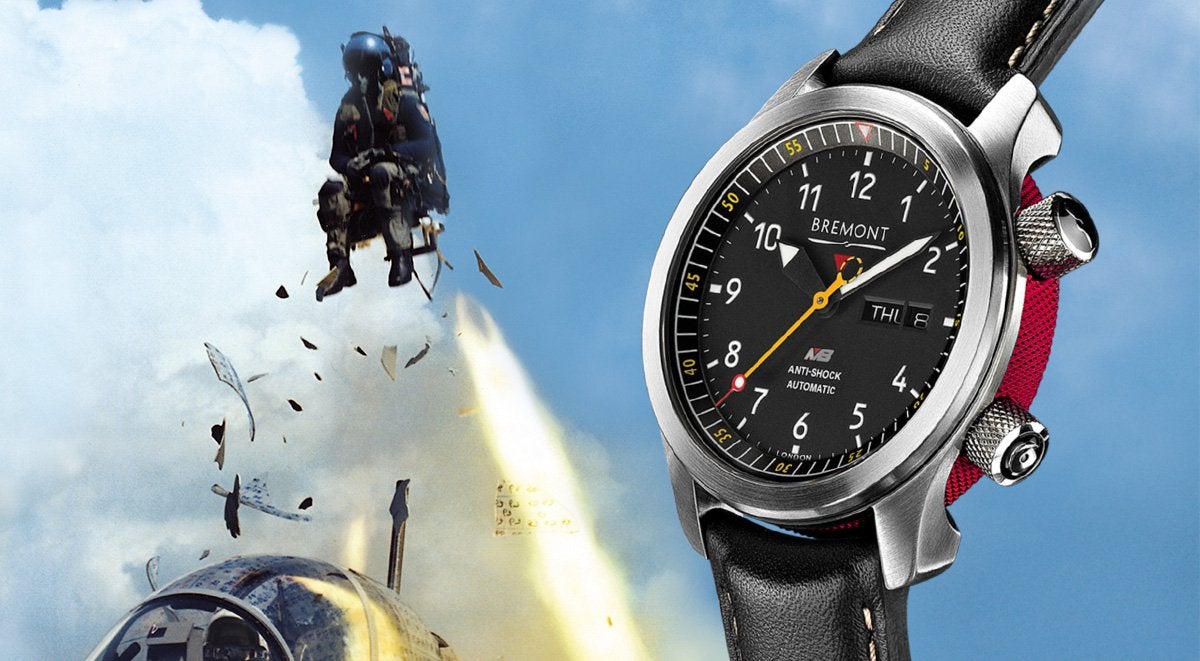 How do know someone is a pilot? If they don’t tell you (they will though), their large and flashy watch will give it away. Whether it’s a Breitling or IWC, that piece of wrist bling will give away their occupation faster than Maverick can find a girl to hit on in a bar. That said, aviation watches were originally designed to be large and legible. Behind the controls of a high-speed fighter, a pilot needs to be able to receive and process information like speed, time, and altitude quickly. While the current crop of pilot watches gives aviators and aviation enthusiasts plenty of choice, there’s one pilot watch model you wouldn’t want to own. Or, depending on your idea of fun, perhaps you would.

Early ejection seats used a solid propellant charge. However, as planes got faster, so too did the seats. Ejection seats were eventually fitted with rockets in order to clear the pilot from the aircraft to a safe height, even on the ground. The ejection seat handle also changed over time. Originally, the handle was placed overhead. This design forced the pilot to assume the proper posture and protect their face with their hands after they pulled the handle. However, as seen in Top Gun, the overhead handle proved difficult to reach if the pilot was subjected to high g-forces. Martin-Baker added a second handle at the front base of the seat between the pilot’s legs that would be easier to reach. As helmet and mask technology developed, the overhead handle was done away with completely.

Martin-Baker reports that over 7,600 lives have been saved by their ejection seats. For their accomplishments, the company has been honored with 11 Queen’s Awards. Today, over 17,000 Martin-Baker ejection seats are currently in service. Modern U.S. aircraft fitted with Martin-Baker seats include the Northrop F-5 Tiger, the McDonnell Douglas F/A-18 Hornet, and the Lockheed Martin F-35 Lightning II.

If a pilot ever does have to eject in an emergency, it’s bound to be a memorable event. To mark such an occasion, Martin-Baker teamed up with the Bremont Watch Company to make a watch exclusively for pilots who have ejected using a Martin-Baker ejection seat. Founded in 2002, Bremont prides itself as an English-based watchmaker with “LONDON” displayed on the dials of their timepieces. The company regularly collaborates with British military units to make special order watches for particular commands. Film enthusiasts may recognize the brand as the official watch from the 2014 action spy comedy Kingsman: The Secret Service.

In 2007, Martin-Baker approached Bremont with the idea to collaborate on a watch that could survive the same rigorous testing program as their ejection seats. The precise and delicate inner workings of mechanical watches would require extra care and protection to achieve such a feat, but Bremont accepted the challenge. After two years of research and development, the Bremont MBI was born.

Bremont designed a specialized anti-shock case mount to allow the watch to survive an ejection from an aircraft. The watch was subjected to 12-30G during testing and continued to run within normal specifications. Additionally, the MBI features a Faraday cage to protect its movement from the harmful effect of magnetism that is prevalent in aircraft cockpits. Though civilian models are available in the Bremont MBII and MBIII, the MBI has exclusive features that differentiate it from its commercial counterparts.

All models feature a red lollipop tip and a yellow and black striped counterbalance on their second hand which is reminiscent of an ejection seat handle. However, only the MBI features a full yellow second hand arm. Additionally, the MBI is the only model to bear the Martin-Baker logo on its dial. The most obvious differentiating feature of the MBI is its red aluminum barrel, allowing an ejection seat survivor to be quickly identified. All pilots think they have interesting stories to tell, but if you see one wearing a Bremont MBI, it may actually be worth listening to.