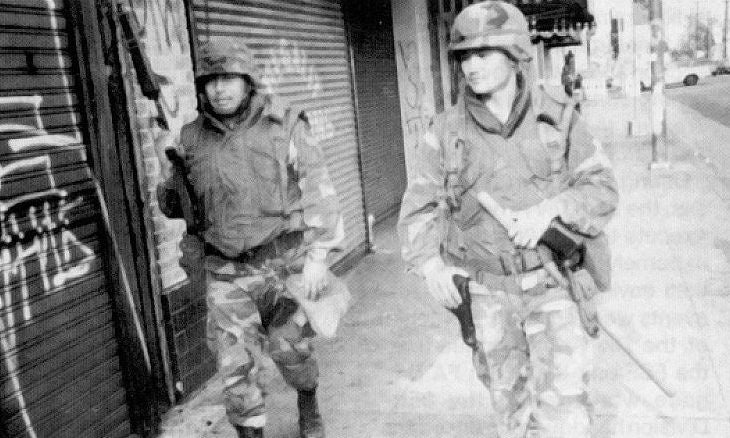 When the Los Angeles Police Department responded to this particular domestic dispute during the 1992 LA riots, they likely didn’t need the backing of the United States Marine Corps – but they had it anyway. Upon approaching the house, one officer was hit by a shotgun blast of birdshot. He called back to the Marines to cover him. Unfortunately, what “cover” meant to the Marines and to the LAPD were two different things.

The officer just wanted the threat of M-16s pointed at the house to keep the shooter from shooting again. The Marines thought the 200 rounds they fired into the house would be enough. They were probably both right. But that’s not how the U.S. Army National Guard would have done it.

Before the Marines were called in, thousands of Guardsmen took to the streets of LA during the 1992 riots.

In the early 1990s, the streets of LA were a dangerous place. Even the LAPD officers who regularly walked their beats admitted to losing the streets to the tens of thousands of gang members who controlled much of the city’s south side. Los Angeles was soon a powder keg of racially and socially fueled frustration that exploded on April 29, 1992. Four LAPD officers were acquitted of using excessive force against Rodney King, a black motorist who was beaten by the officers after evading them on a California freeway.

Their acquittal sparked the 1992 LA Riots, a huge civil disturbance that covered 32-square-miles, from the Hollywood Hills to Long Beach. Eventually, the governor of California would call in more than 10,000 California National Guard troops and 2,000 active troops to quell the riots. That wasn’t enough. Then-Gov. Pete Wilson, a Marine Corps veteran, knew what he needed and asked President Bush to send in the Marines.

Within 36 hours, state and local agencies, along with thousands of California National Guardsmen had largely restored order. That’s when they were suddenly federalized and augmented with more active duty troops and the United States Marines from nearby Camp Pendleton. According to U.S. Army Maj. Gen. James Delk, this caused the morale among the soldiers of the California Guard to plummet, after all their work in restoring Los Angeles. Suddenly being told the Marines were coming in to finish the job didn’t look so good.

Local civilians, on the other hand, knew exactly who to thank. According to Gen. Delk, locals cheered at the appearance of the California National Guard in their neighborhoods. Shopkeepers and restaurants refused to take money from the Guardsmen often even delivering food and drinks to the staging areas.

So in the immediate aftermath of the rioting and violence, the media latched on to the idea that calling in the Marines was the solution to restoring law and order, despite the fact that the job was mostly done by the time the Marines arrived. The Guardsmen, for their part, continued to do their jobs despite the lack of national appreciation. By the time the Guard withdrew, the streets were much safer than they were before the riots began. The crime rate dropped by 70 percent and local citizens did not want the troops to leave. In fact, it was more than a month before the last National Guard soldier left Los Angeles.

The good news is that the federalization of the joint task force worked exactly as it was supposed to and no one wearing a uniform of the U.S. military was killed or seriously injured. Most importantly, no U.S. troops killed or wounded any innocent civilians.