MIGHTY 25: Meet Jerry and Tracy Flanagan, who transform people’s trash into veterans’ treasures - We Are The Mighty 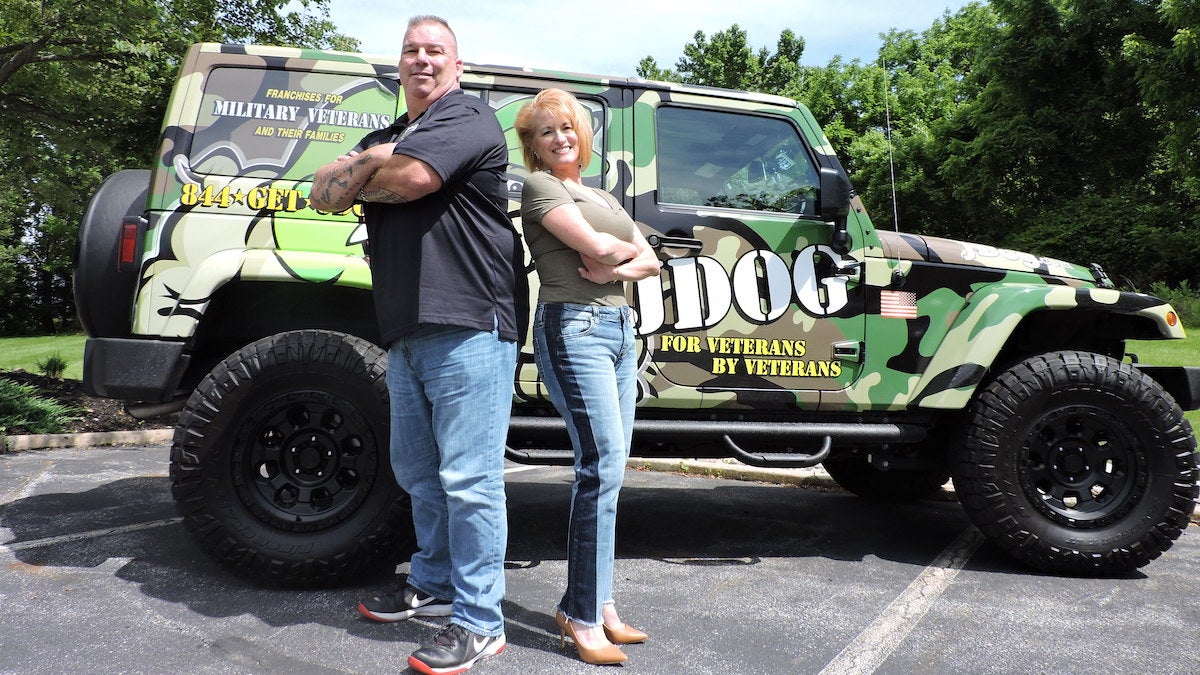 As the United States approaches our 20th year at war, veterans are coming home forever changed. Some suffer unseen wounds that profoundly impact their lives. Others are unable to sustain or find meaningful employment. And one veteran, family-owned business is working to change all of that.

Since Tracy and Jerry Flanagan founded JDog Junk Removal & Hauling, the company has become a nationally recognized brand for many reasons. This junk business looks a little different, for one. When a customer hires JDog, the workers that show up are not just your average employee. They are veterans, donning camo pants and sharp-looking JDog embroidered shirts. The veteran workers arrive on time (which means early), are always polite and refer to customers as “ma’am” and “sir.” The experience is nothing like anything the majority of customers have ever seen. And it all started as a way to save the Flanagan family from financial ruin.

“We started [JDog] in March of 2011 and really it was out of desperation,” Tracy shared with a laugh. She explained that her husband had always been a successful entrepreneur but when the financial crisis hit in 2008, they lost everything. After filing bankruptcy, the Army veteran and his wife had to quickly figure out how they would make it. Unable to even get a sit down interview for a job, Jerry went back to the drawing board to create another business. This time, something he felt would be recession proof.  JDog Junk Removal and Hauling was born.

“Jerry started doing a couple of jobs. The phones were ringing and he always showed up early because when you are military, that’s what you do. If you are on time, you are late. He just worked like he does – military style, ” Tracy explained. She shared that customers were stunned by the work ethic and kept asking him where it came from. When they finally found out Jerry was an Army veteran, they encouraged the family to advertise it.

“We put veteran owned and operated on all of our stuff and it was a home run. People wanted to use me because I was a veteran,” Jerry said. The response was overwhelming. They both quickly realized that Jerry couldn’t physically do every single job. But they didn’t want to hire just anyone. They wanted veterans.

Jerry went down to the local VA hospital and met with the director, who discussed the Compensated Work Therapy program with him. The veterans in the program had all been in combat and were struggling with drugs and alcohol, unable to get jobs. “I’m like, bring them to me,” he said. Both Jerry and Tracy were troubled by the reports of high unemployment among veterans. They knew this was a way they could impact those numbers.

“It was the most rewarding experience, to be able to make a difference in a veteran who came back and is struggling and just needs a company or an employer to give them a chance. Not only did we give them a chance, we embraced them. We understood the value of what they brought,” Tracy explained.

When she shared the idea of franchising with Jerry, he was understandably nervous given their past experience with bankruptcy. But Tracy just knew they had something special. “I said, ‘We have to help these guys. We have something here that can give a veteran the opportunity to control their own destiny and be in business for themselves and wow, how many veterans can they hire? How many lives can we affect? We have to do this.’”

A few franchises later, they wanted to go even bigger. After partnering with a capital equity firm, the sky was the limit. “My goal is to get every single zip code in the United States to have a JDog brand,” Jerry shared. He shared that the company is committed to eradicating veteran unemployment.

In 2016 they signed an agreement with the VA Central of Washington. JDog is now connecting new franchises with VA clinics all over the country that have Compensated Work Therapy programs. “It’s a snowball effect and has just been amazing,” Tracy said.

Not only is JDog supporting veterans, they are embracing military spouses too. “I’m proud to be able to be a resource and mentor to them. We have a JDog spouse community and I have a spouse buddy program too,” she shared. “We are offering a culture and mission; it’s so much more than a business.”

In 2019 they took it a step further and created the JDog Foundation, a nonprofit dedicated to serving the military community and supporting their needs. Tracy and Jerry hope to impact positive change and support the needs of those who they feel sacrifice so much. “The company is based on people, purpose and patriotism. It’s really simple,” Jerry said.

Through hardship and what seemed like endless challenges, Tracy and Jerry Flanagan created a unique business idea that blossomed into a beacon of hope for veterans. At JDog there is welcoming space for them to be honored, valued and for them to do the same for others. One veteran at a time.