5 things sailors and marines will fight over when underway, according to a Marine - We Are The Mighty

5 things sailors and marines will fight over when underway, according to a Marine 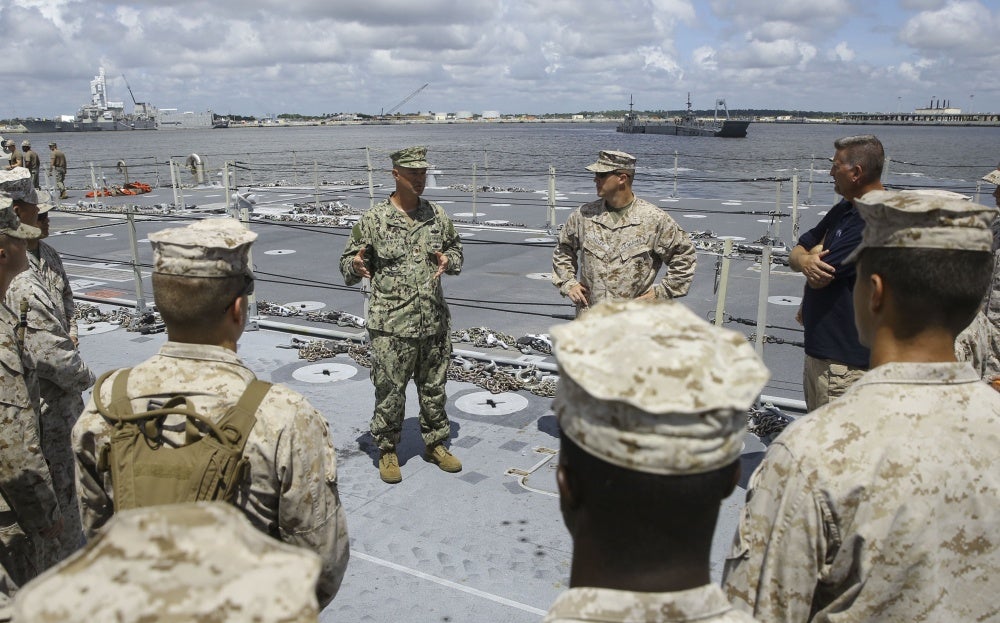 The Marine Corps and Navy have a complicated relationship at sea. There is no shortage of inter-branch jokes at one another’s expense. Time old classics such as, ‘The Marine Corps is the men’s department of the Navy,’ (which is true) does not inspire loyalty while underway. The military branches are brothers in arms, and just like brothers in real life, they like to beat each other. That is, until the president issues the order to liberate a country or provide humanitarian aid. Life’s boring on ship. Naturally Marines and sailors will always find things to bicker about.

An argument between Marines and sailors always breaks out at the head of the line, especially at chow time. The Marine Corps has early chow and late chow. The Navy does as well but they take it to another level. Instead of having a separate line for people on post or at work, and be civilized, they just cut in front of the line like heathens. This, of course, causes problems when one gets between a devil dog and his chow. By the end of the first month it is guaranteed that new rules will be set in place because of the culture clash.

2. E5 and below working parties

Every time there is a RAS, also known as a Resupply at Sea, the intercom will announce an E5 and below working party. The Navy promotes faster, thus, they will have more E5’s than the Marines stationed on board. However, a Marine infantry sergeant who has served multiple combat deployments is going to have a few choice words about doing bush league tasks like that. In the Navy, one doesn’t get respect until they become an E6.

Marines do. This one is a given, Marines can out-drink any sailor in any hemisphere. It’s not even a contest. Also, Corpsman with the Fleet Marine Force count as one of us. So, although a Corpsman maybe out-drinks a Marine it doesn’t count because he’s cool.

The Navy’s version of a POG is a button pusher. The Marines aboard the ship need to weight train because it is part of their job to be in top physical shape. These are the guys who, if the president wants a country invaded in 24 hours, are landing on the beach. The sailor on social media all day in his office doesn’t need to be in the gym. Worst yet, they don’t know how to train correctly and get in the way. Eventually, the ship will have to divide the gym into blocks when one branch has access to it without the other. Marines won’t budge on this one: your ship, our gym, stay out.

The ship also needs help with other duties in the kitchen, the ship store, security and watch on the command deck. Drafting Marines into these roles is a double-edged sword. If crew as a whole gets along things will be quiet and uneventful. That’s the exception, not the rule.

Every single one of these altercations will result in pettiness on both sides. The Navy engineers will turn off the air conditioning in the Marine berthing. The Marines running the ship store will give priority to their friends because the sailors cut in line at chow. If a port allows some adventure everyone will be scattered to the wind. If port is limited to a small area with beer, there is probably going to be a fist fight. When sh*t needs to get done, everyone will put their differences aside and accomplish the mission. When there is no clear mission, both branches will always clash underway. ‘Rah.