How Silly Putty got its start in the military 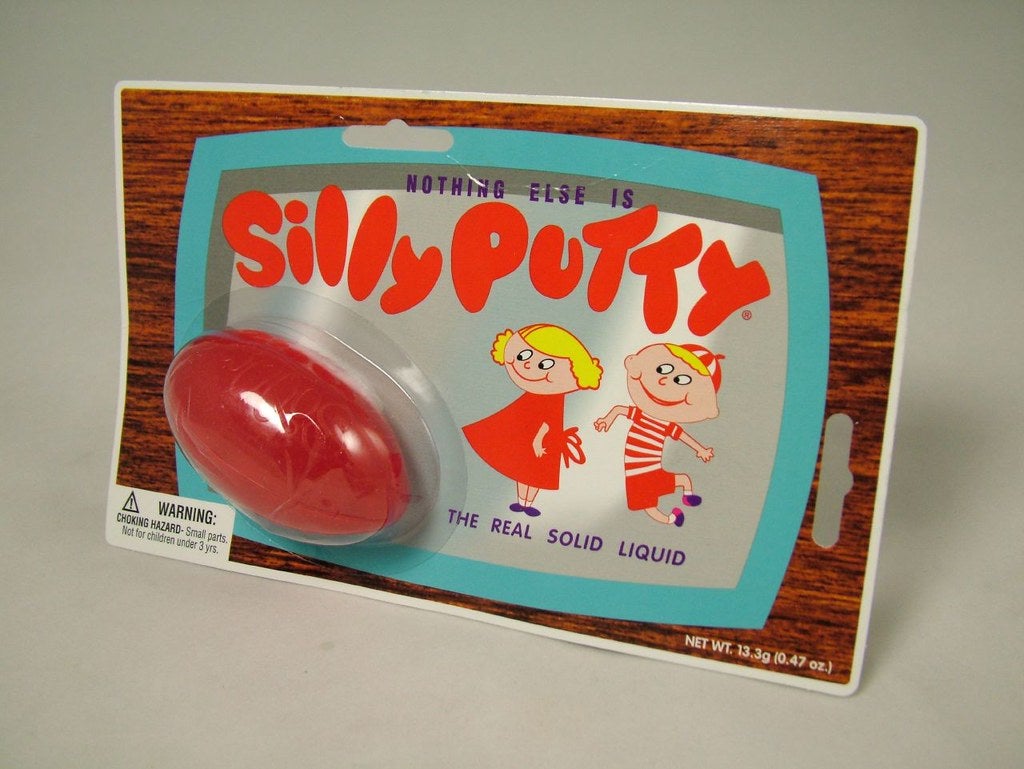 It’s the crazy compound that bounces, molds, stretches, snaps — the non-Newtonian fluid that seemingly takes on new properties with each shape. It’s a beloved toy that has been around since the 1940s, but didn’t make its way into the hearts and hands of families until years later. Why? The substance’s original use wasn’t to become a toy at all, in fact, it was created to have tactical uses in World War II.

Years later when the viscoelastic liquid silicone was rediscovered, it was repurposed into a toy and remains a best seller for Crayola to this day. The business was a slow start, but after a mention in the New Yorker put Silly Putty on the map, more than 250,000 units were sold in three days. Originally intended for adults, manufacturers realized their biggest market was in kids aged 6-12. They went on to create its first commercial, airing during the Howdy Doody Show in 1957.

The history of Silly Putty

In the midst of WWII, the U.S. was rationing its rubber sources to keep up with production of boots, tires, and other necessary war supplies. This was due to Japan’s invasion of countries that produced rubber in the Pacific Rim. During this time, Americans were encouraged to make their rubber items last as long as possible, and donate any extras they might have on hand.

In 1943, researchers combined boric acid with silicone oil to create a “gooey, bouncy material with unique properties.” It’s disputed as to whether James Wright with General Electric, inventor Harvey Chin, or Rob Roy McGregor of Earl Warrick was the original scientist to do so. However, Wright is given credit in Crayola’s history, while Mcgregor received a patent.

During this time, workers were impressed with Silly Putty for several reasons. It didn’t mold, it had a high melting temperature, it was extremely stretchy and versatile, and it was non-toxic. However, it would not work as a viable replacement for rubber.

Years later, in 1949, Silly Putty was re-discovered by Ruth Fallgatter, who owned the Block Shop Toy Store. She got in touch with Peter C.L. Hodgson, a marketing consultant, and the pair began marketing it as a toy. It made its debut at the International Toy Fair in New York in 1950.

Hodgson put himself deeper into debt to purchase extra product and packaging. He’s credited for coming up with the name Silly Putty and putting it into plastic eggs. They sold for $1 a pop.

Sales were steadily growing, but with the Korean War, silicone was on short supply — one of the main ingredients to Silly Putty. A year later the shortage was gone and Silly Putty was back on the market.

In 1961 Silly Putty made its way outside the U.S., being sold in the Soviet Union and in Europe, becoming hits in both countries. It also made it into outer space when astronauts from Apollo 8 took it on a lunar orbit in 1968. The surge of popularity turned Hodgson into a multi-millionaire, due to ongoing publicity and sky-rocketing sales.

After Hodgson’s death in 1976, Crayola obtained the rights and began selling it as part of their line of toys. It was introduced to the National Toy Hall of Fame in 2001, and to-date,  more than 300 million eggs — that’s 4,000 tons — had been sold.

Today, Silly Putty comes in many colors and scents, including offensive scents for the class clowns among us (vomit and puke), and aromatherapy options that target older users. Small eggs start at $1.99, topping out at $99.99 for a five-pound block.