The 369th Support Brigade is now officially the Harlem Hellfighters 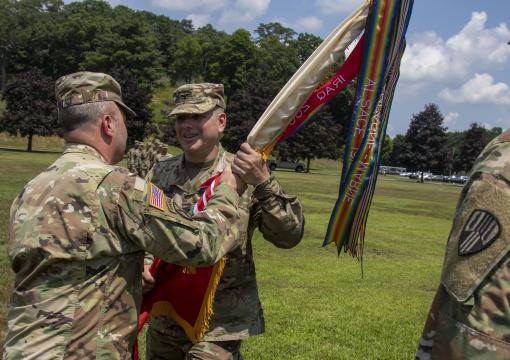 The Harlem Hellfighters spent more time in combat during WWI than any other American unit. Comprised primarily of African-American soldiers, the 369th Infantry Regiment spent 191 days in frontline trenches and suffered 1,500 casualties, the most losses of any American regiment. The soldiers of the regiment were given their nickname by their German enemies for their ferocity and tenacity in battle. However, it took the Army over 100 years to recognize the unit’s official designation as the Harlem Hellfighters.

On September 21, 2020, the Army Center of Military History recognized the 369th Infantry Regiment and its descendant, the 369th Sustainment Brigade, as the Harlem Hellfighters. The 369th’s nickname is now observed as a historical and traditional name like the 42nd Infantry Division’s “Rainbow Division” or 3rd Cavalry Regiment’s “Brave Rifles” nicknames. The special designation program is operated by the Force Structure and Unit History Branch of the Army Center of Military History. The effort to officially recognize the 369th’s nickname began in 2019.

New York State Military Museum Director Courtney Burns was working on a 369th display at the Harlem Armory when he went looking for an official certificate in the Army’s records recognizing the unit’s nickname. To his surprise, there wasn’t one. Shocked by this oversight, Burns reached out and notified the unit’s commander, Col. Seth Morgulas. “That is crazy,” Morgulas recalled. “How does it not have it?”

Despite the lack of official recognition, the Harlem Hellfighters nickname is well-known and commonly used. The Triple-A video game Battlefield 1 depicts the 369th and even featured a downloadable content release titled the “Hellfighter Pack”. Moreover, the street that runs by the unit Armory was renamed from Harlem River Drive to Harlem Hellfighters Drive by the New York State Department of Public Transportation. “That was such a glaring error,” Burns said of the nickname’s lack of recognition by the Army.

Initially, the 15th was relegated to unloading supplies from transport ships. However, in March 1918, the 15th was reorganized as the 369th Infantry and loaned out to the French Army for frontline service. It was during this time that the unit earned its famous nickname, among others.

The soldiers of the 369th called themselves the “Black Rattlers” for their unit crest which depicts a coiled rattlesnake. The French soldiers that they served with called them “Hommes de Bronze” or “Men of Bronze”. But, it was the Germans who called the men of the 369th “Hollenkampfer”…”Hellfighters.” “They are devils,” said a Prussian officer who was captured during the Meuse-Argonne offensive. “They smile while they kill and they won’t be taken alive.”

After the armistice, the Hellfighters joined the allied armies as they paraded through formerly German-occupied territory. “That day, the sun was shining, and we were marching. And the band was playing,” recalled Hellfighter Melville Miller. “Everybody’s head high, and we were all proud to be Americans, proud to be black, and proud to be in the 15th New York Infantry.” The Hellfighters also received a welcome home parade down Manhattan’s Fifth Avenue, an honor they were denied when they departed for Europe because of their race.

Though the 369th Infantry was officially disbanded after WWII, the unit was re-formed as the 369th Sustainment Brigade of the 53rd Troop Command under the New York Army National Guard. With the Army’s official recognition of the Harlem Hellfighters designation, the 369th now carries on the nickname earned by brave soldiers that came before them.