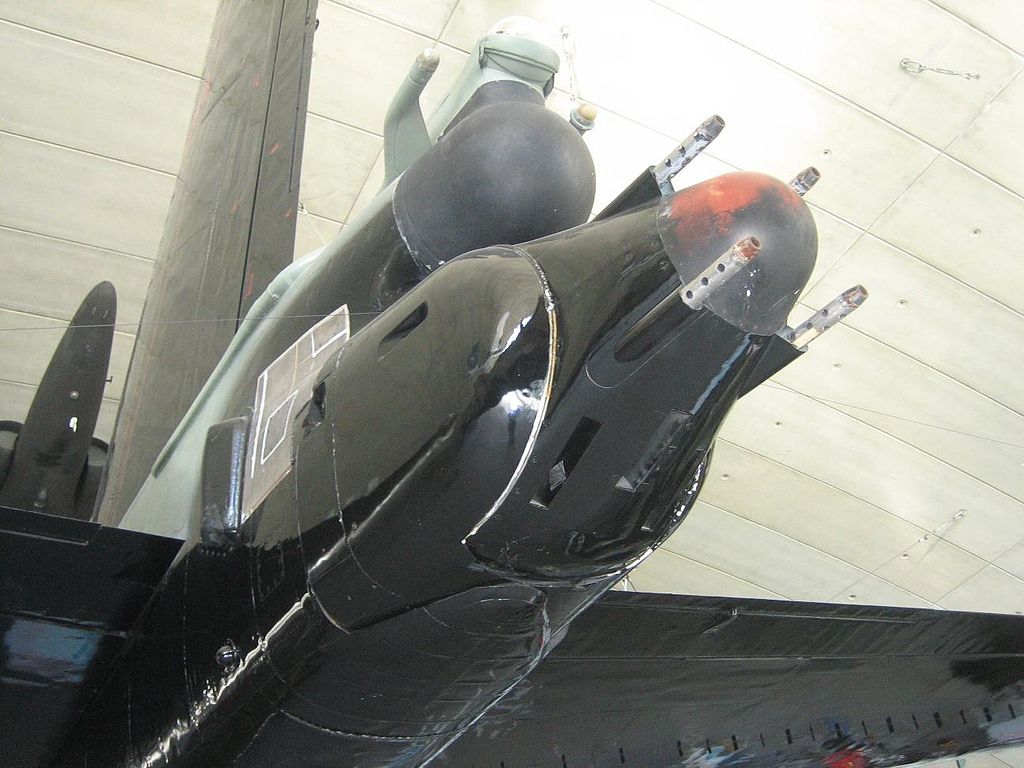 The tail turret on the B-52D at the Imperial War Museum Duxford. (Wikipedia).

The B-52 has been serving in America’s nuclear deterrent arsenal since 1952. But a lot has changed on the BUFF and its mission since it was on the front line against the Soviet Union during the Cold War.

The strategic bomber has gone from being designed to deliver huge nuclear bombs on Russia to dropping precision-guided conventional bombs on al-Qaeda in Afghanistan. Today, it is far more likely to deliver its nukes using air-launched cruise missiles than a gravity bomb.

But little did most people know that part of its post-World War II heritage equipped the lengthy bomber with tail guns.

The retirement of Chief Master Sgt. Rob Wellbaum is notable since he was the last of the B-52 tail gunners in the Air Force. Most versions of the BUFF had four .50-caliber M3 machine guns – fast-firing versions of the historic Ma Deuce (1,000 rounds per minute, according to GlobalSecurity.org) that were also used on the F-86 Sabre. Two B-52 versions went with different armament options, the B-52B (twin 20mm cannon in some planes) and the B-52H (an M61 Vulcan).

In the B-52G and H, the tail gunners were in the main cabin, using a remotely operated turret. Earlier models had the tail gunners sitting in a shooters seat in the rear of the plane, providing the BUFF an extra set of eyes to detect SAM launches.

Those tail guns even saw some action. During the Vietnam War, three B-52Ds used their tail guns to score kills. All three of the victims were North Vietnamese MiG-21 Fishbeds, who found out the hard way that the BUFFs weren’t helpless targets on their six.

The B-52s up to the G model ultimately used the MD-9 fire-control system for the tail guns. The B-52G used the AN/ASG-15 for its remotely-operated quad .50 caliber turret while the B-52H used the AN/ASG-21 to guide its M61 Vulcan.

An incident during Operation Desert Storm, though, would soon change things for the BUFF. A friendly-fire incident occurred when a tailgunner thought an Iraqi plane was closing in. The plane was actually an Air Force F-4G Wild Weasel. The crew of the U.S. jet mistook the B-52G’s AN/ASG-15 for an enemy air-defense system. The Weasel crew fired an AGM-88 High-speed Anti-Radiation Missile, which damaged the BUFF. The BUFF returned to base, and was reportedly named “In HARM’s Way” as a result.

Shortly after the misunderstanding, the Air Force announced that the tail guns were going away.

So, for all intents and purposes, a generation has passed since the B-52 had a tail gunner. Gone are the days when a fighter had to watch its steps when trying to get behind the B-52. To get a glimpse at what was lost, check out the video below.