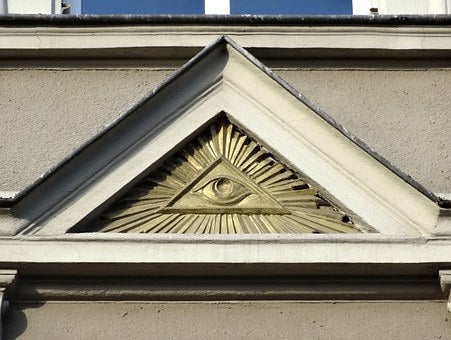 Modern day conspiracy theorists put the Illuminati in cahoots with other conspiracy regulars, including the Rothschild Family, billionaire George Soros, and the Freemasons. While the Illuminati were a real organization, there’s no evidence to support any ongoing activity.

The modern Illuminati were conceived as a prank between Marine Corps veteran and 1960s counterculture activist Kerry Thornley and Journalist Robert Anton Wilson. The idea was to create mass paranoia so that American would begin to question everything they read. It was called Operation: Mindf*ck and it seems to have worked all too well.

Around 1776, liberal, nonreligious scholars of the Enlightenment formed a secret society in Bavaria to oppose superstitious and religious encroachment on public life, to liberate people from the laws of religion. Unsurprisingly, this didn’t sit well with the Catholic Church, who pressured the ruler of the German state to outlaw the group. By 1788, the group functionally ceased to exist.

But that didn’t stop believers from blaming their troubles on the Illuminati. Some believed the society lived on, but simply got better about hiding their existence. The first conspiracy theories popped up around 1798. They claimed Illuminati were going to incite slave rebellions in the Caribbean and that they started the French Revolution. They even made an appearance in Leo Tolstoy’s War and Peace.

In the first years of the American Republic, fear of the Illuminati gave way to fear of the Freemasons. These fears even led to the formation of an Anti-Masonic political party. Somewhere along the way, the mass fears barely died down, and they never disappeared entirely.

In the 19th century, European monarchs blamed the Illuminati for fomenting revolutions. In the 20th Century, the rise of international communism was put at the feet of the Illuminati. Then came Thornley and Wilson.

Kerry Thornley rose to prominence in the 1960s, having written a book about Lee Harvey Oswald in 1962, the year before Oswald assassinated President John F. Kennedy. Oswald and Thornley served together in the Marine Corps and knew each other well. Thornley’s book, The Idle Warriors was about his time in the Corps with Oswald. Thornley would go one to become a major counterculture writer in underground media, as well as a founder of Discordianism, a satirical religion.

Robert Anton Wilson was a Discordian adherent and Playboy staff writer who was also active in the counterculture movement. A New York Magazine article claims it was Wilson who detailed a plan to create paranoia in American media by attributing “all national calamities, assassinations, or conspiracies” to the secret Illuminati order.

The plan was laid out in a memo and named Operation: Mindf*ck, a name only hippies would come up with and execute. But Wilson and Thornley were more than just hippies. Wilson had access to reporters in the popular mass media. Thornley was already a producer of underground media. Through both means, they began to spread the idea of a secret Illuminati force that drove national news events.

The movement got a real boost when New Orleans District Attorney Jim Garrison tried to pin JFK’s murder on Thornley due to his association with Oswald. Thornley was not found guilty and Wilson sent a letter to a Los Angeles Free Press reporter claiming that the jury were all Illuminati and he knew because all 12 were missing their left nipple.

Since then, the Illuminati have been accused of creating a nuclear defense bunker in North Dakota, masterminding the 9/11 attacks, using the Denver International Airport as a headquarters, and of constantly trying to create a New World Order. In reality, it was all a joke that went a little too far.