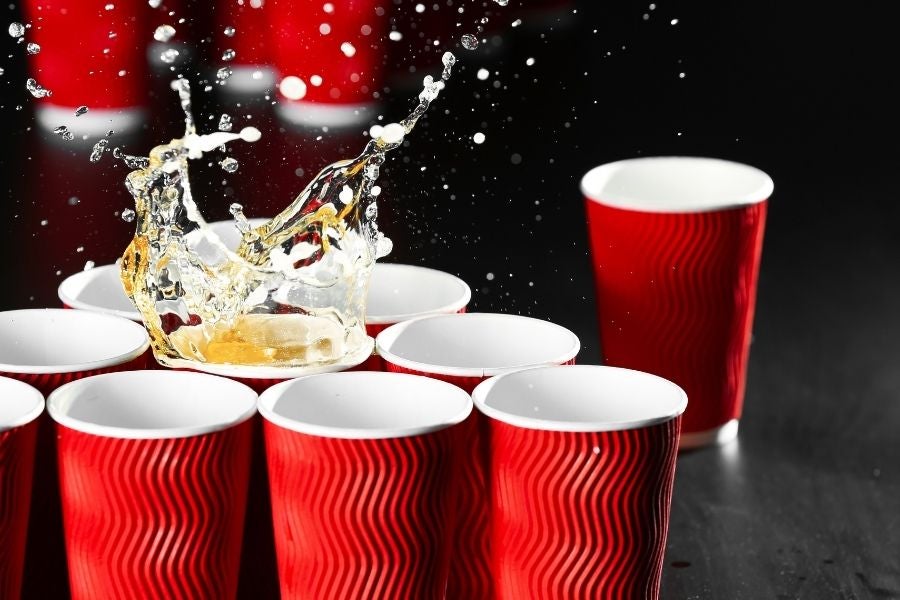 The military has a multitude of traditions involving alcohol that one generation passes onto the next. The Marine Corps has a tradition called Mess Night, which is essentially a unit wide drinking game in our dress blues. It gets messy, ridiculous and fun. However, you don’t have to dress like a Marine to drink like one. Here are 6 drinking games to keep troops entertained over a weekend at the barracks.

Play with a group of three or greater sitting in a circle. The second player is the person sitting to the first player’s right. The first player says a movie title, the second player says a movie title that starts with the same letter the previous title ends with (example: First player says ‘Jurassic Park,’ second player has to say a movie that starts with ‘K’). The third player does the same until someone can’t think of a movie title and drinks. Movies that start with ‘the’ in the title will instead start with the first letter of first actual word in the title. If a title starts and ends with the same letter the rotation reverses. Players can only name a movie title once per round. When a player loses, the round resets and all titles are fair game again. If a player needs time to think they can drink their beer until it is finished and lose.

2. Never have I ever

The first player states ‘Never have I ever..’ and finishes the sentence with something they have never done but will cause the most amount of players to drink. The next player does the same until all drinks are gone. For hardcore mode, each player holds up three fingers and puts one down when they have done the act that’s mentioned and takes a shot instead.

Similar to Never Have I Ever, players sit in a circle and say something that is most likely someone in the group would do. The group counts down from three and everyone points to whomever is the person most likely to do what the player said. That person drinks and it becomes their turn to say something. If there is a tie both players play rock, paper, scissors and the loser drinks instead.

This is a great for parties as an ongoing drinking game during the evening. A random player whispers something to another in the form of a question. The receiving player points to a person playing the game and shouts their name. If the person who is being pointed at wants to know the question that was asked they must drink to hear it.

I had to include this staple drinking game because it is as American as apple pie. Two teams, single or doubles, face off across a table with cups of water shaped into a cone. Set aside beers equal to the number of cups. Each team must shoot a ping pong ball into the other team’s cups and if they make it an opponent must drink a beer. The side with no cups loses and must drink the other the other teams remaining beers.

Note: House rules vary, it is important to declare them before the match starts. The host is in charge of stating the rules before playing. Rules could be: if reracks are allowed and how many, what happens when a ball double bounces and makes it, if an auto loss happens when a player is holding a cup and another ball is thrown into that cup, etc.

There are several variations for the set up of Kings cup, also known as ‘Kings’. The Marine Corps version has a deck of 52 cards placed in a circle around a can of beer. Players sit in a circle and take turns picking up a card. Each card has a rule that must be followed. When that player’s turn is over they place the spent card under the tab of the beer can. If the seal is broken before the end of the game the player who broke the seal must chug the can. The following are the most common rules for each card in the game.

Ace: ‘Waterfall’ The player who reveals the card declares ‘Waterfall’ and all players drink in order starting from the left until the circle is complete. No one can stop drinking until the first player stops and others stop in turn. If the player before you does not stop you cannot stop either.
Two: ‘You’ Pick two people to drink. You can also pick one person and make them drink twice.
Three: ‘Me’ Take a drink.
Four: ‘Floor’ last person to touch the floor drinks.
Five: ‘Thumbs’ Also known as ‘Thumb Master’ the player who picks this card can place their thumb on the table. When other players see the thumb on the table, they must also place it on the table. The last person to place their thumb drinks. The next player to pick a five is the new ‘Thumb Master’.
Six: ‘chicks/males’ All males drink. If females are playing, their card is ‘four’ instead of ‘floor’.
Seven: ‘Heaven’ The last person to place their hand in the air drinks.
Eight: ‘Mate’ – Pick someone in the group, whenever you drink they drink until someone picks up another eight.
Nine: ‘Rhyme’ Choose a word, and the person to your left has to think of a word that rhymes with it. Repeat until someone uses a word that was already used or hesitates. That person loses and drinks.
Ten: ‘Categories’ pick a category, and everyone must go round the circle taking it in turns to name something within that category. If someone hesitates or repeats a word already used they drink.
Jack: ‘Rule’ Make up rule that is followed for the rest of the game.
Queen: ‘Question’ Just like Thumbs, you ask a question and if a person answers they must drink. This is an ongoing role until someone else picks up a queen. The key is to ask nonchalantly so they have their guard down and you get them to drink.
King: ‘Pour/Drink’ – The player who reveals the last King card must drink the beer in the center.