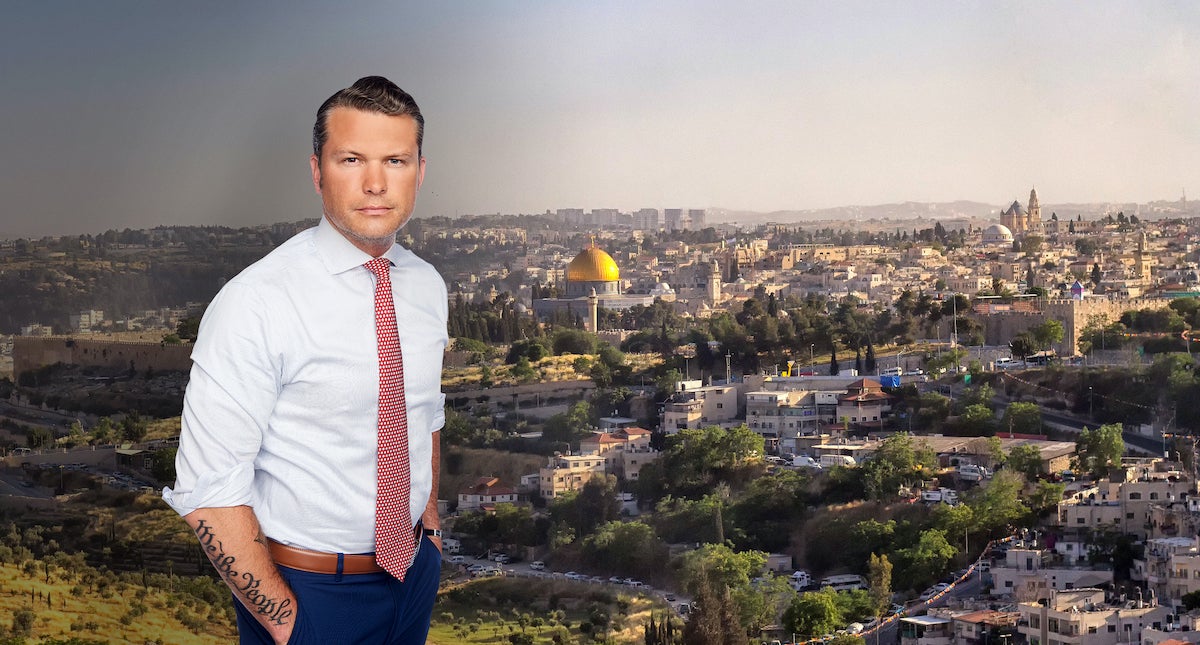 Violence escalating between Israel and terrorist organizations like Hamas is, unfortunately, all too common. But the fighting over Israel’s holiest sites dates back much, much further than Hamas or even modern Israel. Jerusalem, Israel’s capital city is home to the holiest sites of three major religions: Christianity, Judaism, and Islam.

Jerusalem remains the focal point for much of the conflict that rages between Israel and the Palestinians today – because those holy sites are all within the same square mile.

In his latest Fox Nation special, “Battle in the Holy City,” Fox News correspondent Pete Hegseth takes viewers closer to the powder keg than they’ve ever been. Hegseth is uniquely qualified for the job. He’s been in combat before with the U.S. Army in Iraq and Afghanistan.

Most weekends, Pete Hegseth is in the Fox News studio as a co-host of Fox & Friends Weekend. Not too long ago, however, he was Maj. Pete Hegseth of the Army National Guard. He joined the guard after graduating from Princeton in 2003, serving as an officer with the 101st Airborne Division in Guantanamo Bay, Cuba.

Not long after returning from Cuba, he volunteered to serve in Iraq as a civil affairs operations officer. It was in Iraq where he not only earned a Combat Infantryman Badge, he was also awarded the Bronze Star.

That experience would serve him well when he volunteered for a tour in Afghanistan with the Minnesota National Guard, this time as a counterinsurgency instructor. Two years after returning from the war, Hegseth joined Fox News.

Since then Hegseth has produced a number of thought-provoking specials and reports under his belt. He has interviewed American military veterans from all walks of life on the Fox Nation show “Modern Warriors.” During the Coronavirus pandemic, Hegseth hosted “America Together,” a “living room concert” that raised more than $8 million to support pandemic relief efforts.

Today, his latest special report is one that has suddenly become more important than ever. As the tensions and clashes between Israel and Hamas increase, Hegseth’s “Battle in the Holy City” shows us why so many people are fighting and dying for this small strip of land in the Middle East.

Jerusalem is a much bigger city than the carved stone streets of the old city. The old city is little bigger than a third of a square mile. Between the old city walls, however, the streets and houses are packed with religious and secular people from all walks of life. Jewish and Palestinian muslim familes, Orthodox Christian monks, and even Lutheran bishops are all packed in this small space.

Also inside this space is the Western Wall, the last remnant of the second temple, believed by the Jewish people to be the one place where heaven and earth come together. It is situated next to the Temple Mount, where the golden Dome of the Rock sits.

To muslims, the area overlooking the Western Wall is where the prophet Mohammed ascended to heaven with the angel Gabriel, to pray with Abraham, Moses, and Jesus. It is the third holiest site in the Islamic faith, after Mecca and Medina.

Just a short walk away from the Western Wall and the Dome of the Rock is the Church of the Holy Sepulchre, a large church built around the two holiest sites for Christians of all denominations. The first is Calvary, where Christ was crucified and the second is his empty tomb, where he was buried and resurrected.

The Old City of Jerusalem can be a powder keg of tension. When fighting erupts, the results can be catastrophic. On Fox Nation’s “Battle in the Holy Land,” viewers can get glimpses of the holy sites and relics, a closer view than going in person, as Hegseth guides them through the start of the conflict and the reasons it continues to this day.

If you’re in the military or a veteran, you can check out Pete Hegseth and other awesome veterans for a year for free on Fox Nation. Check out the Fox Nation website for more details!