Gen. Ben Skardon, Bataan Death March survivor and famed Clemson grad, passes away at 104 - We Are The Mighty 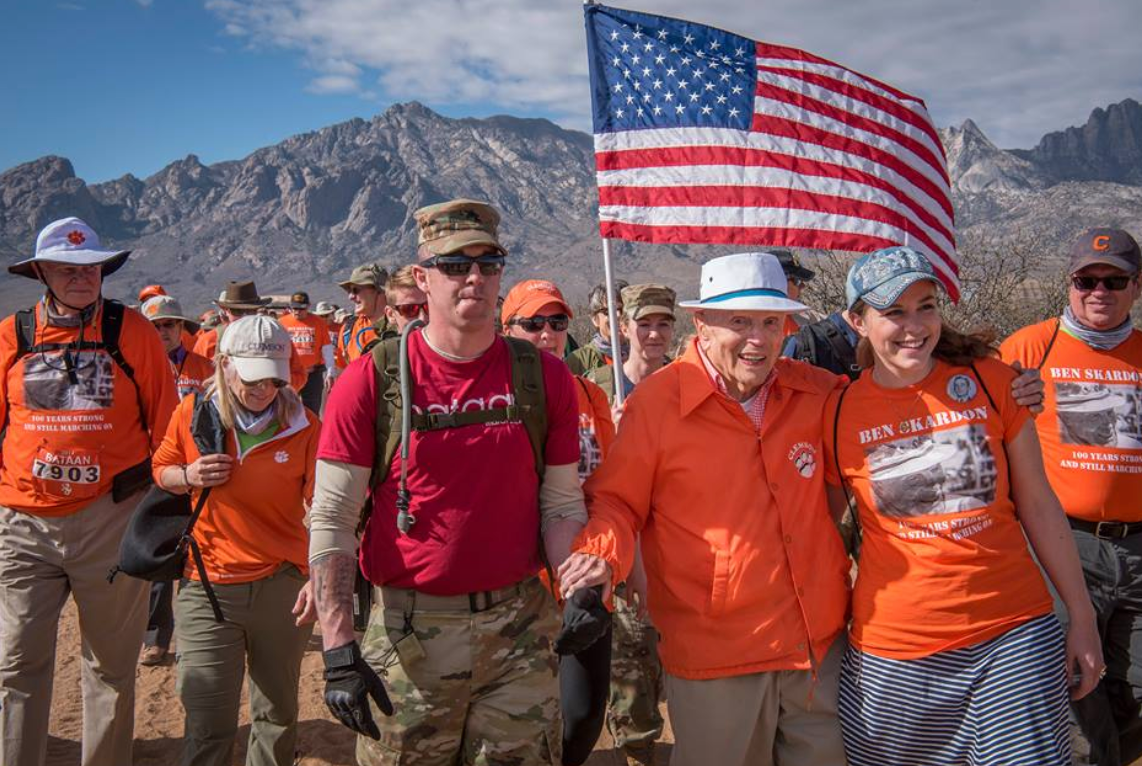 Honorary General Beverly ‘Ben’ Skardon is unique among WWII veterans in that he joined the military before Pearl Harbor. Following his graduation from Clemson University in 1938, Skardon commissioned as an Army Infantry Officer. For reference, the Army had less than 200,000 men the next year in 1939. The size of the Army would swell to over 8 million during WWII. Even in 2021, the regular Army consists of roughly 485,000 soldiers.

By the time of Japan’s coordinated surprise attack across the Pacific, Skardon was the commander of Company A of the 92nd Infantry Regiment PA (Philippine Army). His unit, consisting of Filipino soldiers, was stationed on the ill-fated Bataan Peninsula. Following the Japanese invasion of the Philippines, Skardon led his troops through some of the fiercest fighting in the defense of the islands. During the first four months of the war, he earned two Silver Stars, a Bronze Star with “V” device and a Purple Heart.

Despite the heroic efforts of the American and Filipino defenders, Allied forces on the Philippines were forced to surrender. On April 9, 1942, Bataan fell and Skardon and his troops became Prisoners of War. That same day, they began the infamous Bataan Death March to their prison camp. Over the course of roughly 65 miles, American and Filipino POWs were brutally beaten and wantonly executed by their Japanese captors. Despite suffering from malaria, Skardon survived the horrific war crime and began more than three long years in captivity.

Like the Death March, life in a Japanese prison camp was brutal, inhumane and genuinely in violation of international law. During his time in captivity, Skardon became deathly ill. He credits his survival to two other Clemson alumni, Henry Leitner and Otis Morgan. Skardon’s fellow Tigers spoon-fed him and eventually traded his hidden gold Clemson ring for food. Neither Leitner nor Morgan survived the war. Their story of camaraderie and sacrifice is now told at every Clemson Ring Ceremony.

As Allied forces pushed the Japanese back across the Pacific, prisoners in the Philippines were moved to mainland Japan. Skardon was one of these POWs being transported on an unmarked ship. During the voyage, the ship was sunk, but Skardon survived. When he was ultimately freed from Japanese captivity by the Soviets in August 1945, Skardon weighed just 90 pounds.

Despite the horrors he endured during the war, Skardon remained in the Army. He went on to serve in Korea from 1951-1952 and rose to the rank of Colonel. After 23 years of dedicated service, Skardon retired from the Army in 1962. Two years later, he returned to Clemson as a professor. Skardon taught in the Department of English for over 20 years until his retirement in 1985.

In 2006, at the age of 88, Skardon became the only Bataan Death March survivor to walk in the annual Bataan Memorial Death March at White Sands Missile Range, New Mexico. He walked over eight miles in his first event and returned to walk 12 more times. Skardon walked his last Memorial March at the age of 101. In 2020, the Memorial March was cancelled. However, Clemson students, alumni, and veterans organized the Clemson 8 Challenge to honor the eight Clemson alumni who survived the Death March in 1942 and carry on Skardon’s mission of honoring the men who made the ultimate sacrifice. At the age of 103, Skardon walked more than three miles for the event.

On November 13, 2021, Congressman Jeff Duncan announced the approval of Skardon’s honorary promotion to Brigadier General. “Col. Ben Skardon’s life of perseverance and selfless leadership exemplifies what it means to not only be a U.S. soldier but a true American hero,” said Congressman Duncan in a press release. “Col. Skardon’s service and sacrifice to the United States deserve recognition because he went above and beyond the call of duty to defend our freedoms. I admire Skardon’s love for his country displayed in what all he endured for our nation after serving in both World War II and the Korean War, surviving prisoner of war camps and the Bataan Death March. He is a national treasure and epitomizes what it truly means to be an American hero. We cannot thank him enough.”

On November 15, just two days after his honorary promotion was announced, Skardon passed away. “Ben Skardon was the epitome of what it means to be a Clemson Tiger,” Clemson University President Jim Clements said in a press release. “He was selfless, loyal and kind, and he lived a life of service, both during his military career and his tenure as a professor in our Department of English.” Skardon’s legacy is one of absolute honor, unwavering commitment, and selfless service that all Americans can look to for inspiration.