This hard-luck WWII soldier survived the Bataan Death March, torture and the atomic bomb - We Are The Mighty 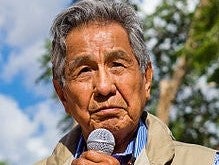 Army Sgt. Joe Kieyoomia was captured by Japanese forces in 1942 as the Philippines fell to the Japanese war machine. Unfortunately for him, that was the start of 43 months of captivity that began with the infamous Bataan Death March and only ended with the surrender of Japan.

When he was captured by the Japanese, Kieyoomia – like tens of thousands of other Filipino and American POWs – was forced to walk some 60-70 miles in the sweltering heat, under constant enemy mistreatment. When he finally arrived at a prison camp, he watched as his captors forced them to dig their own graves and then shot them.

Kieyoomia was eventually sent to the Japanese mainland, because of his looks and his name. The enemy assumed he was Japanese American, but unfortunately for Kieyoomia in this instance, he was a Navajo. When he arrived on the mainland, he was beaten and tortured daily.

“They didn’t believe me,” he told The Deseret News when he was 72 years old. “The only thing they understood about Americans was black and white. I guess they didn’t know about Indians.”

But Kieyoomia wasn’t a code talker. He was deployed to the Philippines with New Mexico’s 200th Coast Artillery. When the Japanese needed to know what the Najavo code was, they came to Kieyoomia – but he didn’t know the code. He didn’t even know about the existence of the code.

The Japanese then had him listen to radio broadcasts – he was surprised to hear his native language. The broadcasts made no sense. His jailers didn’t believe that he couldn’t understand the messages and he was forced to stand naked in six inches of snow on a parade ground in below freezing temperatures.

Kieyoomia’s feet froze to the ground. When he was forced back inside, his skin stuck to the ground and he left a bloody trail on the parade ground. He was tortured for months on end.

“I salute the code talkers,” he said in the interview with Deseret News. “And even if I knew about their code, I wouldn’t tell the Japanese.”

The Japanese came to Kieyoomia with written words, transliterated into English. The Japanese tortured him to learn the Navajo code, but it was very different from mere words from the language. Kieyoomia couldn’t tell them if he wanted to it was gibberish, and it was designed to sound that way, even if someone spoke the language.

The Navajo soldier tried to end his own life with a hunger strike, but that only earned him more beatings from his Japanese captors.

His troubles were only ended by the second atomic bomb dropped on Japan. On Aug. 9, 1945 “Fat Man” detonated over the city, killing 40-75,000 people instantly.

Kieyoomia miraculously survived the nuclear blast because of the way he was sitting next to the concrete wall in his cell. He was abandoned for three days before a Japanese officer freed him.

After the war, Sgt. Joe Kieyoomia returned to the Navajo nation, recovered from his wounds, and lived to age 77. He died in 1997.