Grunt Style's Tim Jensen on Iraq, Afghanistan and democracy - We Are The Mighty 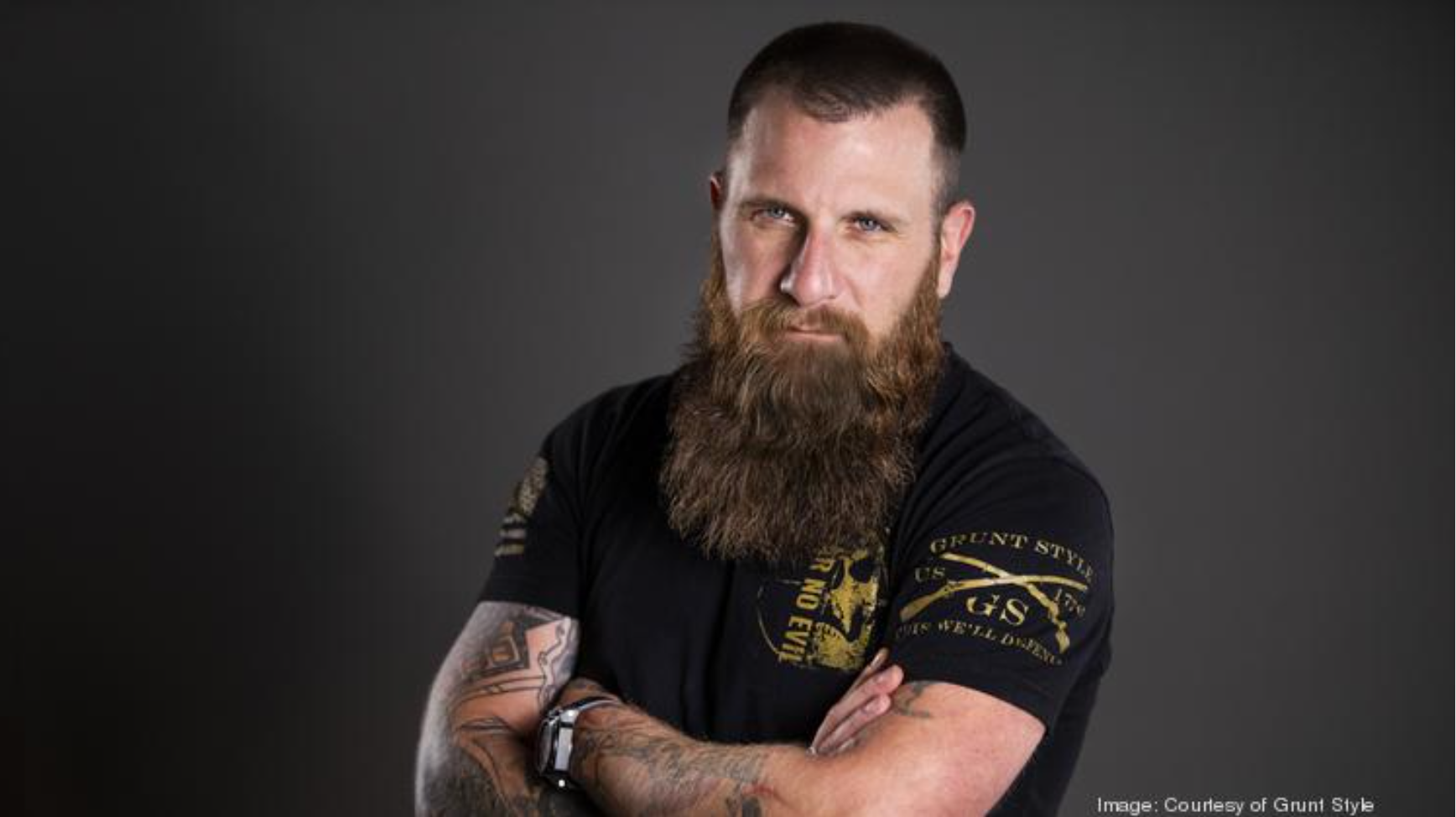 Tim Jensen is the Co-Owner and Chief Strategy Officer of Grunt Style, LLC. A man of many hats, he is also President of the Board of Directors for the Grunt Style Foundation as well as President of G3 Dynamics. A genuine bottom-to-top success story, Jensen started at Grunt Style folding shirts. He credits his rise through the company to the values of honor, courage and commitment that he learned as a Marine.

In 1997, Jensen joined the Marine Corps as an 1833 Amtracker. Spending his time in garrison, he decided to get out in April 2001. “I f**ckin’ hated it,” Jensen recalled. “I was not a good garrison Marine.” He went to work as a union carpenter in Chicago until the events of 9/11 prompted him to return to the Corps. He entered the Marine Corps Reserves and reclassified as an 0311 Rifleman to join a weapons company with 2nd Battalion, 24th Marine Regiment when he heard that would be deploying.

From September 2004 to April 2005, Jensen served in Iraq. “We were a Reserve unit that was given a massive AO,” he said of his deployment. “3 million people in our area of operations.” To cover such a large area, 2/24 was divided into sections and assigned to towns within their AO with the mission of securing them for the upcoming Iraqi elections. During Operation Phantom Fury, also known as the Second Battle of Fallujah, insurgents were pushed out of the city and fled back towards Baghdad. The main crossing over the Euphrates between Fallujah and Baghdad was the Jurf Al Sakhar Bridge which 2/24 was on the other side of.

Serving as the trap on the Baghdad end of the bridge, Jensen and 2/24 received heavy contact. “It was a very, very chaotic time; a lot of violence,” he said of the fighting. “My platoon alone took anywhere from 40 to 60 IED hits and 18 contacts a day.” Jensen’s unit went on over 200 combat missions and traversed over 5,000 miles during their deployment. For 2/24, victory would be measured not in enemy combatants killed, ground taken, or even miles of road secured. “It was to bring the first Iraqi national election and make sure the operation was a success.”

Initially their province was slated to be the only one to not have polling stations due to the high level of violence. Through their hard work and aggressive fighting, 2/24 flipped their AO from black to green and three polling stations were set up. However, the insurgency continued to be a threat, especially on election day. “Our province was one of the highest turned out polling stations in the entire country. We brought millions of people through three polling stations,” Jensen remembered. “All the while, the insurgency was shooting at them, mortaring them, firing rockets at them. I watched people die standing in line to be a part of this experiment called democracy.”

Seeing the commitment that the Iraqi people had to make their voices heard on election day despite the threat of death, Jensen noted the disparity compared to American elections. “We’re hard-pressed to get a 70% turnout in our country for something as big as the presidency,” he said. Indeed, the 2020 presidential election saw 158 million people submit ballots of the 240 million eligible voters; or, a 66.1% voter turnout. Jensen went on to emphasize that millions of Americans have served in Iraq and Afghanistan over 20 years of combat for the sake of democracy. “We as veterans stand up and fight for the values that we believe in America of life, liberty, and the pursuit of happiness,” he said. “I saw this in Iraq in January 2005.”

Since Jensen was there, Iraq has continued its fight against insurgent forces as its democracy took root. In 2021, the country experienced clashes between pro-Iranian protesters and government security forces in the wake of the 2021 election which saw pro-Iran parties lose seats in parliament. Notably, the election saw a 94.53% turnout. “That is an accomplishment of the American warfighter,” Jensen said of Iraq’s democracy.

By contrast, the fall of Afghanistan has left many veterans wondering if the sacrifices made there meant anything. However, Jensen retains a fact-based optimism for the future of Afghanistan that he hopes other veterans will internalize. “60% of that population is less than 20 years old. So, that means that 60% of that population has had a positive experience with an American warfighter,” he said.

Jensen attributes the success of Iraq as a democracy and the evolution of Vietnam into a capitalist economy to interactions between young people in those countries with professional Americans who treated them with kindness and dignity. “They had positive interactions with the American warfighter that showed them what it is to be a good human and what is it to be a steward of your country.” As Americans continue to support Afghans after the Taliban takeover, Jensen remains hopeful that the positive impression left on the next generation will effect change in Afghanistan.

In the wakes of Iraq and Afghanistan, Jensen encourages fellow veterans to reflect inwardly. “We can understand what our purpose is, and for many of us our purpose is still to contribute in this lifestyle of service,” he said. With the American public heavily divided along political lines, Jensen believes that the veteran community can provide an example of selfless service to the community and unity as a nation.

As President of the Grunt Style Foundation, he’s leading this effort from the front. The foundation connects service members, veterans, and their families with resources to improve mental health and wellness. While supporting mental health and actively combating veteran suicide is a major focus for the Grunt Style Foundation, it also helps with veteran transitions, alleviates food insecurities, and helps to provide shelter for homeless vets.

As troops overseas continue to conduct combat operations and veterans at home continue to suffer from the effects of service-related ailments like the cancer-causing burn pits, Jensen encourages activism. “We can make a goddamn difference and hold our government responsible,” he passionately remarked. By taking personal responsibility for improving our communities, Jensen believes that Americans can improve the nation as a whole.