This veteran started a national franchise turning trash into treasure. Now, he's getting a tv show. - We Are The Mighty

This veteran started a national franchise turning trash into treasure. Now, he’s getting a tv show. 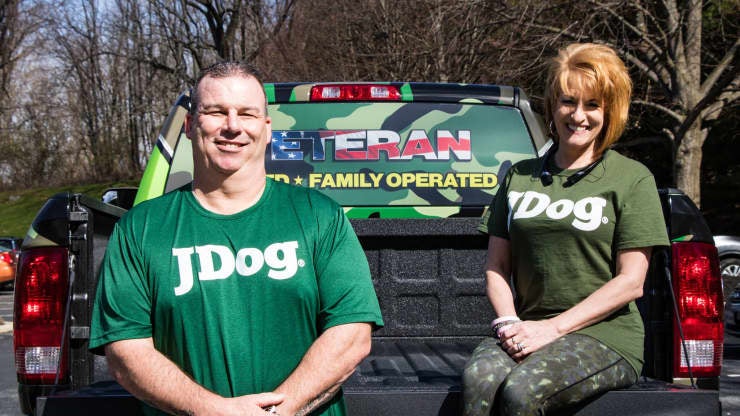 In 2011, Jerry Flanagan started a small junk removal business in Pennsylvania. Having filed for bankruptcy with his last business, Flanagan got into junk removal simply as a way to make cash and put food on the table. “I was having a hard time finding a job,” he recalled. “I had a Jeep, bought a trailer, and with some index cards, magic markers and a cell phone, we basically launched JDog Junk Removal & Hauling.” Today, JDog has expanded into carpet cleaning and floor care with over 250 franchises nationwide.

Flanagan previously served in the Army as a cable runner — also known as a wire dog. The nickname carried over into his business along with the military values that helped him stand out from his competition. “I showed up on time, which was about 10 minutes early,” he noted. “I had a clean-cut haircut and I said ‘Yes sir, yes ma’am.'” Customers appreciated Flanagan’s professionalism and could easily identify his veteran status by his military bearing. Two weeks into the junk removal business, Flanagan was encouraged to advertise as a veteran-owned business. “Customers love to support a veteran business and they would trust you coming into their home,” he explained.

With his wife, Tracy, running the administrative side of JDog, the company quickly gained a positive reputation within the community. “Once people found out I was the local military veteran with a junk removal business, they chose to use us over the top three to four competitors,” Flanagan said. With the business rapidly growing, he needed to hire extra hands. Who better to employ than other veterans?

Flanagan went to a local VA job fair where he was introduced to a work therapy program that connected veterans recovering from addiction with part-time work. “They would come to work everyday, sweat, haul hot tubs, couches and pianos, and the customers would thank them for their service,” Flanagan said. “They had a chance to tell their stories and it really integrated these guys back into the civilian world.” Today, JDog works with all VA locations across the country to employ veterans with every new franchise.

In 2014, JDog added another aspect of veteran support to its business model. Rather than bring everything they removed to the landfill, JDoggers started to repurpose and recycle the discarded items to sell or donate to people who could use them. “We’ve developed relationships and partnerships in these local communities to give back,” Flanagan said. With all of this success, Jerry and Tracy wanted to find another way to support veterans. What they decided on was the JDog Foundation.

The Flanagans’ primary focus was funding mental health programs and ending veteran suicide. As a 501(c)(3) non-profit organization, the JDog Foundation has partnered with Irreverent Warriors and Stop Soldier Suicide to work toward this goal. The foundation fundraises through bracelet sales in restaurants throughout the northeast with hopes to expand nationwide. “We’ve raised thousands and thousands of dollars doing that and that money goes right into the foundation,” Flanagan said. “Nobody draws any salaries from our foundation. It’s 100% volunteer, so all the money goes right back into the organizations to support mental health programs.”

All of the work being done by JDog earned the Flanagans a call from TV show creator Jim Milio, who created Dog Whisperer and Rescue 911. Milio loved how the company centered around supporting veterans and, in 2018, pitched the Flanagans a JDog TV series. “We were kinda in shock,” Flanagan recalled of their meeting with Milio. Following the production of a series trailer, networks like History Channel expressed interest. However, COVID-19 shut down further production. Although JDog itself thrived thanks to contactless junk removal, the show was put on hold.

Once restrictions started to lift and filming could resume, the show acquired financial support from investors and companies like Grunt Style, the show’s number one sponsor. Titled Operation Hidden Treasures, the show follows two JDog franchises in Pennsylvania and Texas. “We’re out there hauling junk, taking those items and donating to people in need,” Flanagan said of the 20-episode series. “You’ll see what JDog does.” Described as American Pickers meets Storage Wars, Operation Hidden Treasures airs on Discovery Channel on Sundays at 8:00 am and American Heroes Channel on Thursdays at 8:30 pm. The series premieres on October 10, 2021.

“We treat the customers with respect, integrity and trust. When the military gets together in a business model, the sky’s the limit,” Flanagan said of JDog’s success. “We’ll probably have over 1000 locations within a few years and that’s just going to create more hiring opportunities for our veterans.”