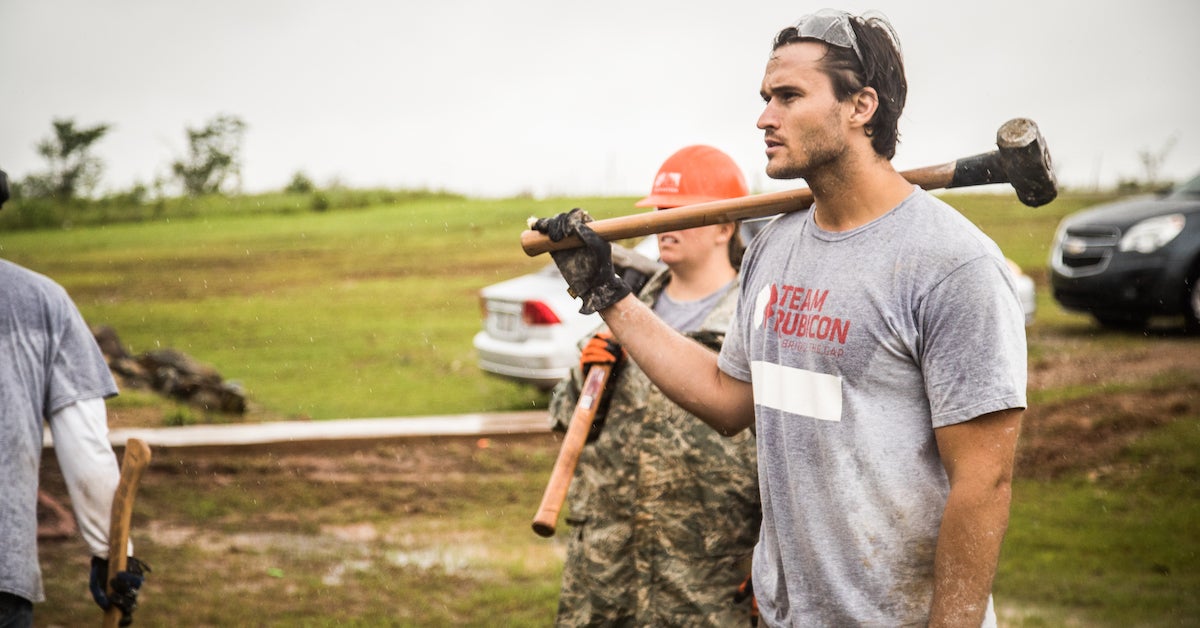 Once a Warrior by Team Rubicon’s CEO Jake Wood is more than a memoir; it’s a deep look inside the heart and mind of a modern American combat veteran. It’s also an extraordinary story of courage, loss and finding a beacon of hope within purpose.

Wood’s journey to putting on a uniform and serving his country began in the most unlikely of places: Mauthausen. He was only seven years old when he toured the concentration camp in Austria responsible for murdering untold numbers of Jewish people. Wood was horrified by the evil that took place but also awed by the photos of the American soldiers responsible for liberating the prisoners. He wanted to be them. Although his father hoped there would never be anything for him to liberate when he grew up, 9/11 changed everything.

When the towers fell during the terrorist attacks on September 11, 2001 Wood was a freshman on a football scholarship at the University of Wisconsin. He felt a sense of guilt for choosing football over exploring West Point, knowing the country would be going to war. A few years later he watched the news as they announced the death of former NFL player turned soldier Pat Tillman. It shook him. Wood knew what he had to do. After he finished his last football game during his senior year, he announced he was going to the Marine Corps.

Wood served four years as a Marine with two combat tours, one in Iraq and another in Afghanistan. His memoir will bring you in and out of his experiences at war and the life he tried to rebuild when he got home. Although he is best known now for being the CEO of Team Rubicon, the story of getting there wasn’t without hardship or loss. It was the culmination of so much that made him want to write his story. Ultimately, it was the birth of his first child that solidified his commitment to tell it.

“My daughter was born two years ago and it made me want to try to put my life in perspective. That started a soul searching journey for me. Part of it was because I knew my daughter would ask me about my time at war. I felt like I owed her a better response,” Wood explained. He began writing some of the book over 10 years ago by chronicling the events of Iraq and Afghanistan. He shared that re-reading those words over a decade later not only caused a new reflection, but it forced him to come to terms with his experiences in combat. He was ready to put it all out there.

As much as it was difficult for Wood to put his life in the pages of Once a Warrior, it was a relief at the same time. Ultimately, he hopes his story will inspire veterans to know their worth. “I think we have an entire generation of veterans who are hanging in the balance. Who they are going to become is whatever we tell them they are. If the broken veteran narrative prevails, we’ll have a generation of men and women lost to that. But if we reframe it and say, ‘You have so much more to give and you are stronger. America needs you, the battle isn’t over there it’s here,’” he explained.

The chain of events that led to him finding purpose again was remarkable in that, had they happened any differently, the Team Rubicon and Jake Wood the world knows – wouldn’t exist. “The universe has this weird way of presenting us with these moments where decisions become really consequential,” he said.

A year into building Team Rubicon, Clay Hunt – fellow Marine veteran and one of Wood’s closest friends – committed suicide. Although Hunt’s story has been told, Once a Warrior opens a curtain into the devastation and other myriad emotions Wood experienced in the days after. It’s a stark reminder of the cost of war that even having purpose couldn’t stop. “I just felt like people should hear his story. It’s played out 20 times a day in this country. I felt like if I could humanize that for people…when you hear Clay’s story, it makes it real,” he shared. Hunt wasn’t the only Marine that Wood lost. He wears the names and lives of four Marines on his wrist, a constant reminder for him to pay it forward because as he says, he survived and they didn’t.

Too many people within the American public utter, ‘Thank you for your service,’ with a sense of rote memorization – a reaction when they don’t know what else to say. Wood wants them to take it deeper. “Most veterans want to share their stories, it’s a literal moral burden and by sharing it they are sharing the weight of those actions or experiences,” he said. “It’s important for the public to hear these stories, as democracy we send our sons and daughters off to war. It’s less than 1 percent of an all volunteer force and we owe it to them to understand what that actually means when we make the decision to use force overseas.”

Once a Warrior pulls the reader in and out of the moments that changed the trajectory of Wood’s life and built the foundation of who he is today. It’s also a deep look into the raw reality of an American combat veteran’s life after war. The pages of this book offer a compelling account of courage and resiliency through devastating loss, but also…hope. Despite witnessing the horrors of war and disaster, Wood remains inherently hopeful for the future. When asked what he would say to those reading his story, he was direct. “My call to action for Americans would be… be worth fighting for. Live your life like you are worth fighting for.”