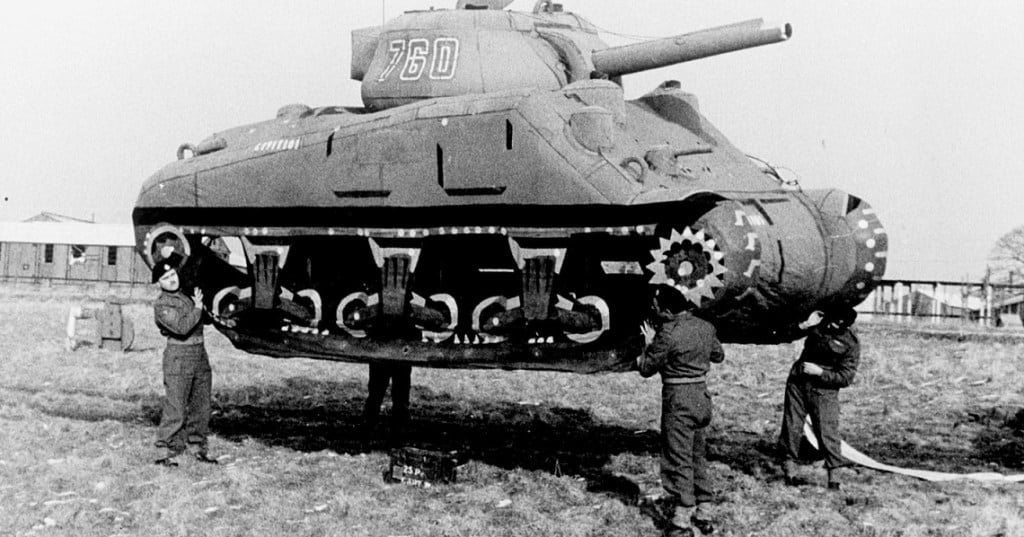 During World War II, the Army had a unit of special forces known as the “Ghost Army.” Officially called the 23rd Headquarters Special Troops, the unit used theatrical and deceptive techniques to fool the enemy. It was soldiers putting on a show with special effects like speakers, inflatable tanks, fake radio transmissions and more.

Made up of 1,100 soldiers, the team used these illusion methods to deceive Axis intelligence–specifically, creating false targets, and faking a much larger force than was actually present.

The Ghost Army’s mission was clear: to impersonate Allied Army units. They remained near the front lines of the war, hiding in plain sight, creating fake battle scenes and camps. They did this by remaining unseen until they wanted to be, and only letting Germans see what they wanted them to see.

Their “traveling road show” was taken to France shortly after D-Day.

Inflatable tanks, planes, Jeeps and trucks were all used, courtesy of the 603rd Camouflage Engineers. Inflating the items with an air compressor, the soldiers would hide the fake vehicles — poorly — with branches and trees, so they could still be seen from far away. They also created false airfields and bivouacs — the latter had laundry drying in plain sight. Motor pools and tank formations were also formed, all of which could be done within a few hours of work. Their “show” was a well-choreographed routine.

It’s worth noting that soldiers in the 603rd were mostly artists and recruited from schools in the Northeast. After the war, many of its former members went on to become known for their artwork.

In addition to visual deceptions, the Ghost Army used sound and light effects. With the help of sound engineers, they played recordings from real Army units. They would adjust the recording based on the current scene they were created, played with high-tech equipment and amplifiers. The sounds were so projected that they could be heard as far as 15 miles away.

False radio transmissions were also played, known as “spoof radio.” By pretending to be soldiers from real units, they employed different communication styles to even further mislead the enemy.

Finally, when the unit did receive real vehicles, they used tactics that they called atmosphere. For instance, driving a few tanks in a circle to create the appearance of a convoy. They would also place dummy Military Police, and painting various insignia on false headquarters to make the scene even more realistic.

The Ghost Army came to be after a similar tactic was used by the British military just a few years prior. Soldiers were recruited for their talents in creativity, artistry, and theatrics. In addition to recruiting from art schools, the Army found members at ad agencies, engineering and architecture firms, and they heavily recruited actors.

Together, the efforts of 1,100 were able to create the false presence of two units with more than 30,000 soldiers. Their efforts are credited for moving German forces away from actual Allied units in more than 20 locations.

Their mission was classified until 1996, when the records were finally unsealed. There was also a PBS documentary, The Ghost Army, released in 2013.