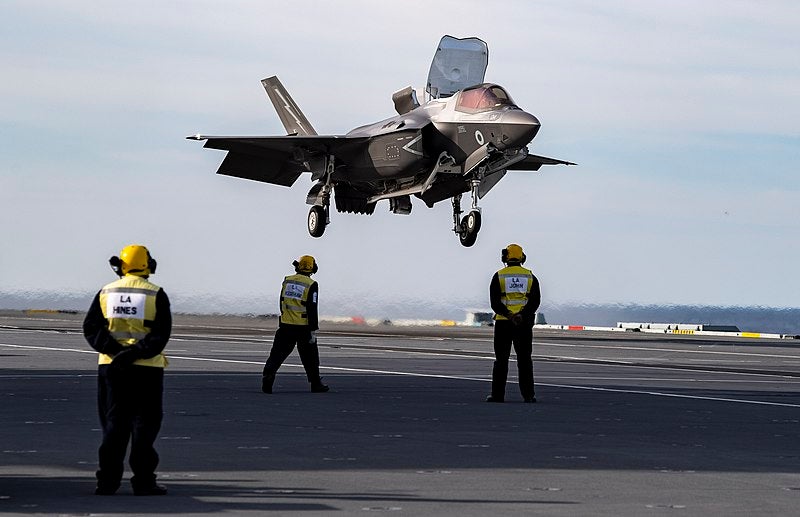 The crash of a Royal Navy F-35B Lighting II sparked a race to find the jet’s remnants in November 2021. In the aftermath of the crash, the United Kingdom’s Navy scrambled to get to the site before the Russians could reach it and the potentially billions of dollars worth of top secret technology that went down with it.

These advanced fifth-generation fighters were carried by the Royal Navy’s flagship aircraft carrier, the HMS Queen Elizabeth II. The multirole aircraft, capable of air-to-air and air-to-surface strikes as well as electronic warfare, is also capable of performing all of its missions at supersonic speeds.

It is not only the most advanced aircraft in the air today, it is also the most expensive. It was one of eight F-35s deployed aboard the Queen Elizabeth II in April 2021 and sent to the Mediterranean Sea to support ongoing airstrikes against ISIS targets in Syria and elsewhere.

During what UK officials called a “routine exercise” in carrier operations in November, an F-35B pilot was forced to abandon the aircraft shortly after completing its short takeoff sequence. The pilot was recovered quickly and with minor injuries, the aircraft was not. It was the first crash of an F-35B by the Royal Navy.

Fearing the Russians would attempt to find it first, the Royal Navy scrambled to recover the remains of the downed aircraft from the bottom of the Mediterranean Sea. UK Secretary of Defence Ben Wallace told Sky News that Russian aircraft had been watching the HMS Queen Elizabeth II very closely since the incident.

Much of the technology on an F-35B Lightning II is considered top secret, from its sensors to its radar and its stealth capabilities. Wallace did not comment about the presence of Russian submarines, but recovering all or part of an F-35 would be a huge intelligence coup for the Russian military.

Moscow had been watching the carrier and its support ships for much of its deployment to the region, even using its own advance warplanes to buzz the ships as it moved into the Mediterranean back in June 2021. That was expected. The downed aircraft, which fell to the sea On Nov. 18, changed the game.

While maintaining its operational temp, the carrier strike group had to conduct a search for the wreckage while tracking Russian presence in the area of the bailout. The UK eventually called on the United States to assist in finding the downed plane. Eventually even NATO got involved in the search.

Brig. Gen. Simon Doran, the top-ranking US officer on board the UK’s flagship aircraft carrier said, “We’ll get it first, I promise you.” Those were all the details given by authorities aboard the ship.

By Nov. 23, Royal Navy submarines and divers had joined in the search and recovery mission to keep the technology out of Russian hands.

Russia’s naval and air forces operate out of a naval base in Tartus, along Syria’s Mediterranean coast. If Russia captured the technology, it would not only threaten American and allied forces in the Middle East, it could weaken Israel’s combat advantage over Russian-allied Syria and other Arab countries. Israel has been flying the F-35 in combat for years now.

This was the fifth crash of an F-35 by any military force anywhere in the world. Two of them were U.S. Marine Corps planes and two were flown by the Japanese Self-Defence Forces. It’s not known if the wreckage of the UK plane has yet been recovered, as much of the ongoing operation is shrouded in secrecy.