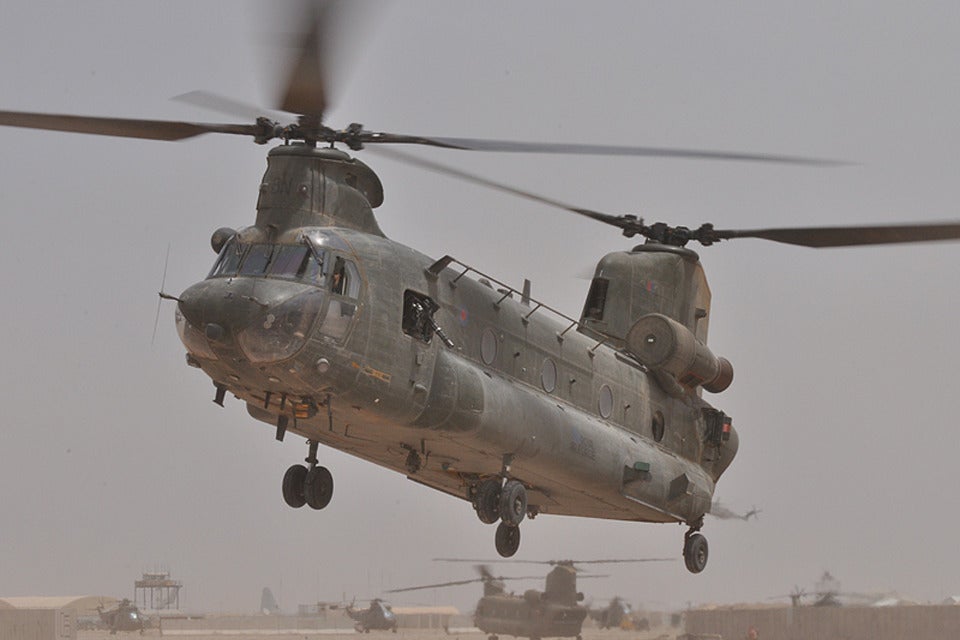 The Boeing CH-47 is the heavy lifter of the U.S. Army. Outside of the United States, Britain’s Royal Air Force is the largest operator of the helicopter. Originally designated HC1 for Helicopter, Cargo Mark 1, the RAF’s Chinooks have seen upgrades up to HC6A in 2022. Notably, one of the original 30 Chinook HC1s ordered by the RAF in 1978 survived to be upgraded to an HC6A. In fact, the Chinook was the only one to survive the Falklands War with Argentina. It went on to serve in every major British conflict for 40 years before its retirement.

In February 1982, the RAF took delivery of one of the last original 30 HC1s ordered from Boeing, military serial number ZA718. The aircraft received the designation code Bravo November, the name by which it is most commonly known. Bravo November did not sit long as it was loaded aboard the container ship MV Atlantic Conveyor bound for the Falkland Islands just a few months later in April.

On May 25, Atlantic Conveyor was attacked and sunk by an Exocet anti-ship missile fired from an Argentine Navy fighter jet. Luckily, Bravo November was airborne at the time, conducting a lift operation from HMS Glasgow. The Chinook later landed aboard the aircraft carrier HMS Hermes and was given the fortuitous nickname “The Survivor.” Not only were the other three Chinooks lost aboard Atlantic Conveyor, but so were all of the spare parts, lubricants, and tools to support Bravo November. Despite this, the aircraft served admirably as the only heavy lift helicopter during the war. In fact, the aircraft carried around 1,500 troops, 95 casualties, 650 POWs, and 550 tons of cargo.

Moreover, the first of four Distinguished Flying Crosses earned by a pilot at the controls of Bravo November was earned during the Falklands War. On the evening of May 30, Squadron Leader Richard Langworthy was conducting a lift operation. Severe snow showers further restricted visibility during the flight and the flat plateau that was briefed as the drop point was actually a sloping rock river with adjacent deep gullies. Langworthy expertly maneuvered Bravo November to a small open area suitable for landing and completed the lift safely. During the return trip, the aircraft’s altimeter malfunctioned and Bravo November struck the sea at around 100 knots. The impact threw spray into the engines and tore away the co-pilot’s door, but Langworthy recovered the aircraft and was awarded the DFC for his actions.

Bravo November continued to serve after the Falklands War but would not see combat again until 2003 during the Iraq War. Flying from HMS Ark Royal, the aircraft, upgraded to an HC2, was the first British helicopter to land Royal Marines ashore. During the assault on the Al-Faw peninsula, Squadron Leader Steve Carr experienced adverse weather conditions and reduced visibility from dust and smoke as well as heavy enemy ground fire while flying Bravo November at an altitude below 100 feet. For his skillful piloting, Carr was awarded the DFC. Over the course of three days, Bravo November averaged 19 flight-hours per day flying troops, artillery, and vehicles into battle. The assault on Al-Faw was the largest helicopter assault in UK military history.

In June 2006, a third pilot earned the DFC with Bravo November, this time in Afghanistan. 1st Lt. Craig Wilson was serving in Helmand Province and was assigned duty as pilot of Bravo November on June 11, 2006. That evening, Wilson and his crew were tasked to evacuate a casualty. Wilson flew the night mission successfully, never climbing above 150 feet. Just a few hours later, Bravo November was sent out again with Wilson later landing with very little fuel left. After being on duty for over 22 hours, Wilson volunteered to fly a third mission bringing reinforcements into a firefight and evacuating two wounded soldiers. For his determination and performance despite having very few night flying hours, Wilson was awarded the DFC.

Four years later, a fourth and final pilot earned the DFC at the controls of Bravo November. On January 29, 2010, ISAF troops engaged in a heavy firefight with the Taliban near Camp Bastion in Helmand Province. Just a short flight away, Flight Lt. Ian Fortune took off from Bastion in Bravo November to evacuate wounded troops. Heavy ground fire prevented the Chinook from landing and Apache gunships spent nearly an hour suppressing enemy positions to clear a landing zone.

Although the volume of enemy fire was reduced enough for Bravo November to land, the helicopter was still hit multiple times. Despite the hot landing zone, the aircraft remained on the ground until all 20 casualties were loaded. During the return flight, Bravo November flew over a Taliban machine gun nest that opened fire. Bullets tore through the Chinook causing multiple system failures including the forward transmission and flight stabilization system. One round ricocheted and struck Fortune in the helmet shattering his visor gouging his head. Despite the damage to the aircraft, the impact knocking his head back and blood pouring down the left side of his face, Fortune safely landed the Chinook at Bastion before walking over to the medical facility himself. He was awarded the DFC.

In 2010, Bravo November returned from Afghanistan. The Chinook remained in RAF service and was upgraded to the HC6A model before it was retired. While a former US Army CH-47 Chinook on display at the RAF Museum in London is painted to represent Bravo November, the actual aircraft is now on display at the RAF Museum Midlands in the Falklands War display. Incredibly, many of the helicopter’s major components were removed before it was given to the museum as they were still serviceable.