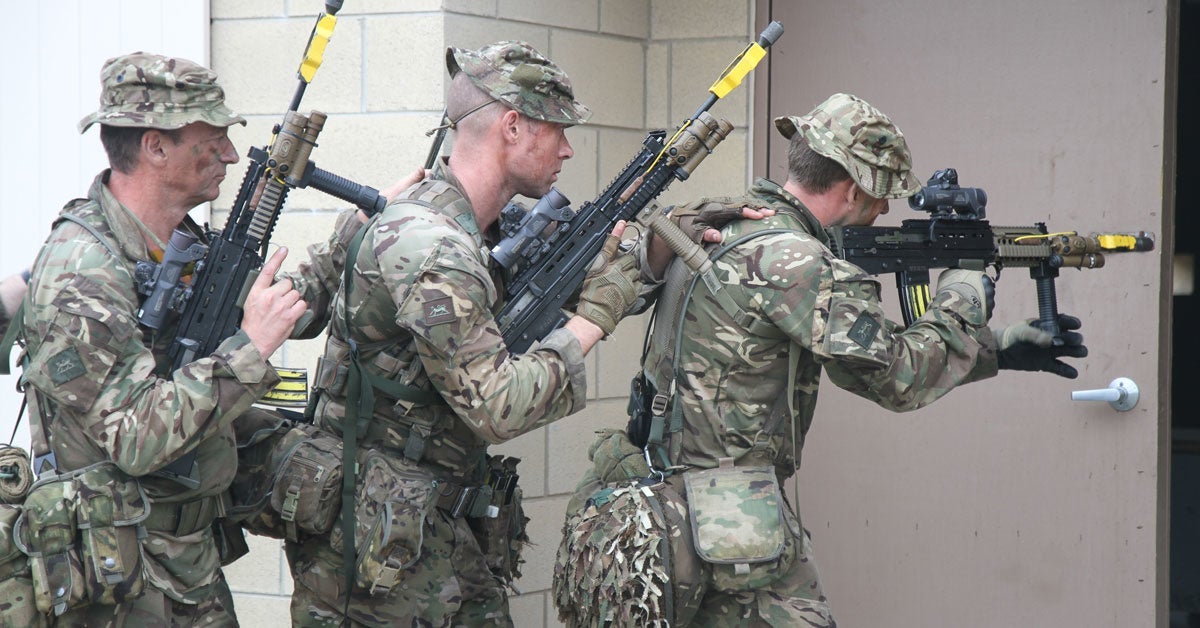 The British evacuation at Dunkirk during WWII was a turning point for the island nation. Unable to go on the offensive against the Germans with their conventional Army, the British turned to more unconventional methods. “Enterprises must be prepared, with specially-trained troops of the hunter class, who can develop a reign of terror down these coasts [of occupied Europe],” stated Prime Minister Winston Churchill in a minute to General Ismay, “first of all on the butcher and bolt policy…leaving a trail of German corpses behind them.” This butcher and bolt policy was carried out by British Commandos, forerunners of the modern Royal Marine Commandos, Special Boat Service and Special Air Service.

The elite soldiers of the SAS are well-known in popular culture thanks to their daring exploits and their depiction in media. SAS soldiers famously ended the Iranian Embassy Siege in London in 1980 and have operated in Iraq, Afghanistan, and other countries during the War on Terror. They have been depicted in video games like Call of Duty and movies like 6 Days. Even the rom-com Love Actually referred to the SAS as, “ruthless, trained kilers,” and so they are.

More so than regular Army units, the SAS is expected to kill, and kill well. Embracing this mission, members of the SAS have taken to donning a Punisher skull badge after their first kill in combat. This affinity for the Punisher skull was allegedly adopted from the U.S. Navy SEALs who wore the symbol extensively whilst operating alongside the SAS in Iraq and Afghanistan. Though the practice is not dissimilar from fighter pilots painting the flag of the enemy on their aircraft after making an air-to-air kill, it came under scrutiny from Army officials.

In 2019, it was revealed that Army officials banned the wearing of the Punisher skull. The move was driven by the claim that the symbol was too similar to the Death’s Head symbol worn by Nazi SS soldiers. This order was reportedly issued after a visit to the SAS Regiment’s Herefordshire base by Army chiefs. Unsurprisingly, the change was not received well by the SAS. One source within the regiment noted that the “order to remove it has gone down really badly.” They elaborated on what the symbol means to a soldier when he earns it. “It’s in recognition for the work he has done – it’s not a celebration of taking a life but more to do with putting himself in a position where his own life has been put at risk.”

The order received plenty of backlash since its issuance. Former Sergeant and Military Cross (the third-highest British Military Award) recipient Trevor Coult called the move, “politically correct nonsense and ludicrous.” Enough dissension was raised that the Army reversed the decision in May 2021. The reversal also comes with a new Director Special Forces who said that he has no problem with troops wearing the badge. He reportedly wore the Punisher skull himself while operating in Iraq and Afghanistan. The MoD did not comment on the reversal.

The return of the Punisher skull was welcomed by the SAS. “When the badge was initially banned, there were many in the regiment who thought that the unit was going to fall victim to political correctness. But fortunately, someone has seen sense,” a source said. “The special forces are often sent on very dangerous missions which often involve killing people – that is a fact of life.” The SAS continues to undertake highly classified and extremely dangerous operations around the world.