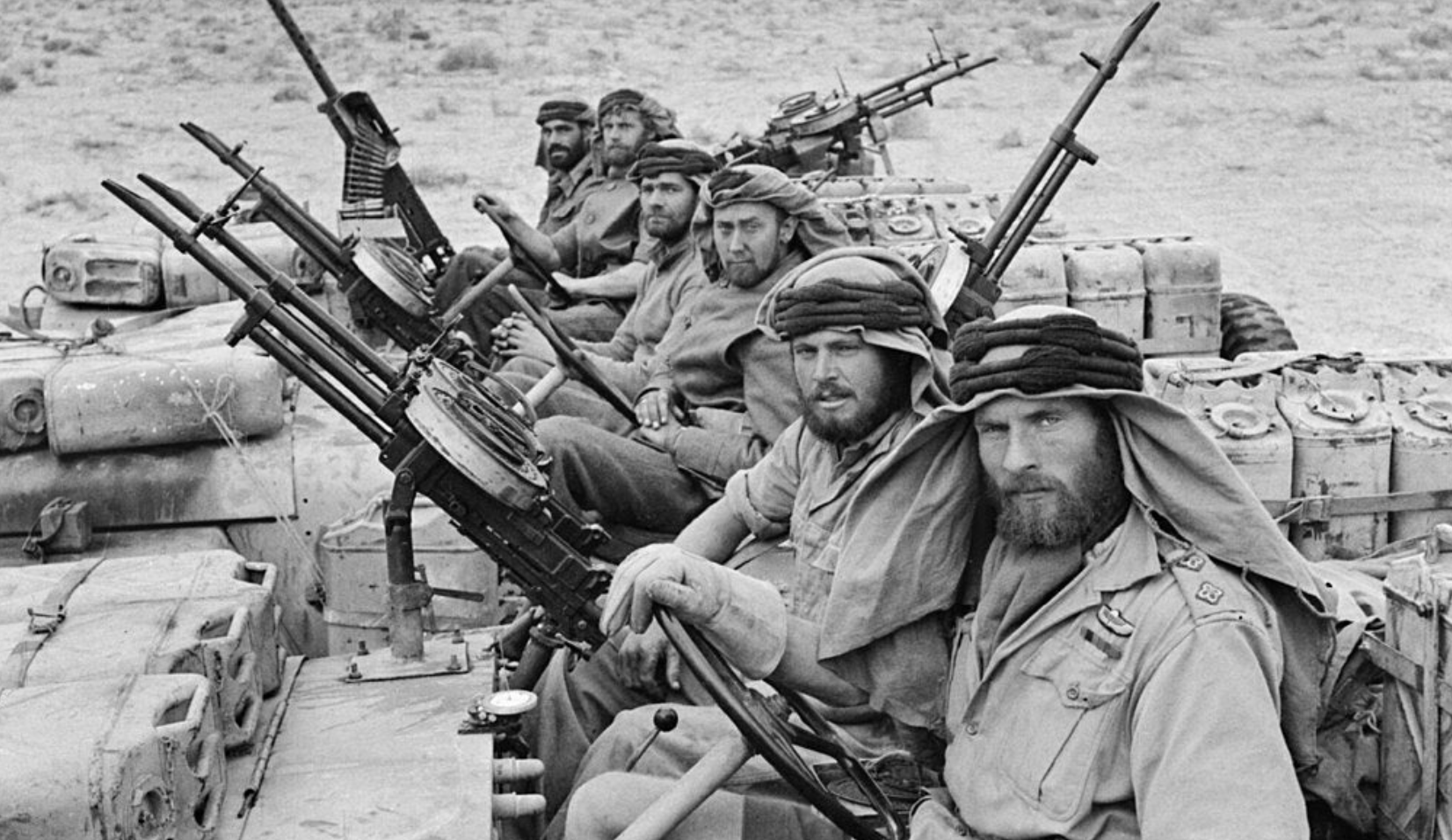 The SAS started with desert patrols and raids during WWII (Imperial War Museum).

The British Special Air Service is one of the deadliest and most elite special forces units in the world. Although many of their missions are shrouded in secrecy, SAS operations that are made known to the public like the Iranian embassy raid and the story of Bravo Two Zero have made the unit legendary around the world. The SAS traces its history back to WWII where the commandos, inserted via air, used jeeps to strike Axis forces with great speed and ferocity in North Africa. Fittingly, the largest known SAS operation after WWII was also a vehicle-mounted desert raid.

Following the terrorist attacks on 9/11, US and UK forces began combat operations in Afghanistan on October 7, 2001. Their mission was to dismantle and destroy al-Qaeda and remove the Taliban from power. To accomplish this, Green Berets rode into battle on horseback alongside the Afghan Northern Alliance to strike Taliban strongholds. At the same time, A and G Squadrons of the 22nd SAS Regiment were deployed to northwest Afghanistan where they conducted largely uneventful long-range reconnaissance. Both squadrons returned to the UK after the reconnaissance missions came to a close.

However, a mission in Afghanistan was found for the SAS operators to cut their teeth. British military intelligence discovered an opium facility approximately 190 miles southwest of Kandahar at the foot of the Koh-I-Malik Mountain. Just 12 miles from the border with Pakistan, the facility was being used as a headquarters and staging ground for Taliban and al-Qaeda fighters. It was also fortified with bunkers, trenches, and caves. Intelligence further indicated that the facility was guarded by 80-100 fighters who were trained at one of al-Qaeda’s top training camps.

Although the US military command was hesitant to commit forces to attacking the facility, British Prime Minister Tony Blair championed the idea of a raid as both a military blow to the Taliban and al-Qaeda as well as a potential intelligence collection operation to facilitate follow-on operations. The raid was given the green light and the SAS operators of A and G Squadrons kitted up to return to Afghanistan for Operation Trent.

As with other special forces units, the SAS excels at nighttime operations. The cover of darkness gives operators a distinct advantage over more conventional forces. However, due to the high demand of US air power in Afghanistan at the time, F-14 Tomcat and F/A-18 Hornet aircraft could only be on station during the day. A daylight raid was less than ideal, but the men of 22 SAS accepted the challenge and agreed to the daytime air support. After all, the SAS motto is “Who Dares Wins.”

Although some of the details about Operation Trent are still classified, most sources place its execution between mid and late November 2001. The operation began with a nighttime HALO jump from a US Air Force C-130 performed by 8 operators from G Squadron into the Registan Desert. The eight-man team conducted a pathfinding mission and marked out a 900x40ft temporary landing zone for the rest of the raiders.

After the pathfinders set up the TLZ and gave the green light for the next phase of the operation, C-130s from Bagram Airfield arrived with the main body. The planes touched down just long enough for the SAS troopers to drive off the ramps in their vehicles before taking back off. In total, the raid included 38 Land Rover 110 Desert Patrol Vehicles, 8 Kawasaki dirt bikes, and 2 logistics trucks. One Land Rover suffered an engine problem and was left behind at the TLZ with its 3-man crew. The rest of the raiders began the 120-mile drive to the target.

Arriving on site, the operators lay in wait as the morning broke. Just after 0700, A Squadron observed enemy movement in the trenches. These trenches, along with the bunkers and the depot of millions of dollars worth of opium, were the primary targets for the F-14s and F/A-18s. Following the opening airstrikes, A Squadron attacked the facility at high speed in their Land Rovers. Meanwhile, G Squadron provided support by fire with their vehicle-mounted machine guns, MILAN anti-tank missiles, 81mm mortars, and M82A1 .50-cal sniper rifles.

As A Squadron advanced, they came under heavy small arms and RPG fire. In response, the SAS called in danger close air support from the Navy fighter planes who conducted strikes until they ran out of bombs and cannon rounds. The close air support, though risky, was effective and A Squadron was able to enter the facility. As the fighting moved to close quarters, the ferocity intensified. “These guys were lunatics,” recounted one anonymous SAS trooper. “Surrender was the last thing on their minds.”

A Squadron cleared the caves and buildings where they recovered all intelligence materials they could find. After two hours of fighting and mopping up, the objective was clear. Both squadrons withdrew and returned to the TLZ where they rendezvoused with the 3-man team whose Land Rover had broken down. Four SAS troopers were received non-life-threatening wounds during the raid and were evacuated by a US CH-47 Chinook. The remainder of the force was extracted by C-130s and returned to Bagram.

Operation Trent was a resounding success. Although official figures have not been released, unverified sources claim as many as 73 al-Qaeda and Taliban fighters were killed for a loss of zero SAS operators. Several dozen more enemy fighters were wounded and captured. Moreover, the raid destroyed a massive supply of opium and equipment and deprived the Taliban and al-Qaeda of a major operations hub. A Squadron also recovered two laptops and a mass of paperwork that drove future raids in Afghanistan.

As a result of their actions during Operation Trent, five medals were awarded to troopers from A and G Squadrons: one Distinguished Service Order, two Military Crosses, and two Conspicuous Gallantry Crosses, the second highest combat gallantry award after the Victoria Cross.