Retired Marine Rob Riggle on serving after service, comedy and what makes America great - We Are The Mighty 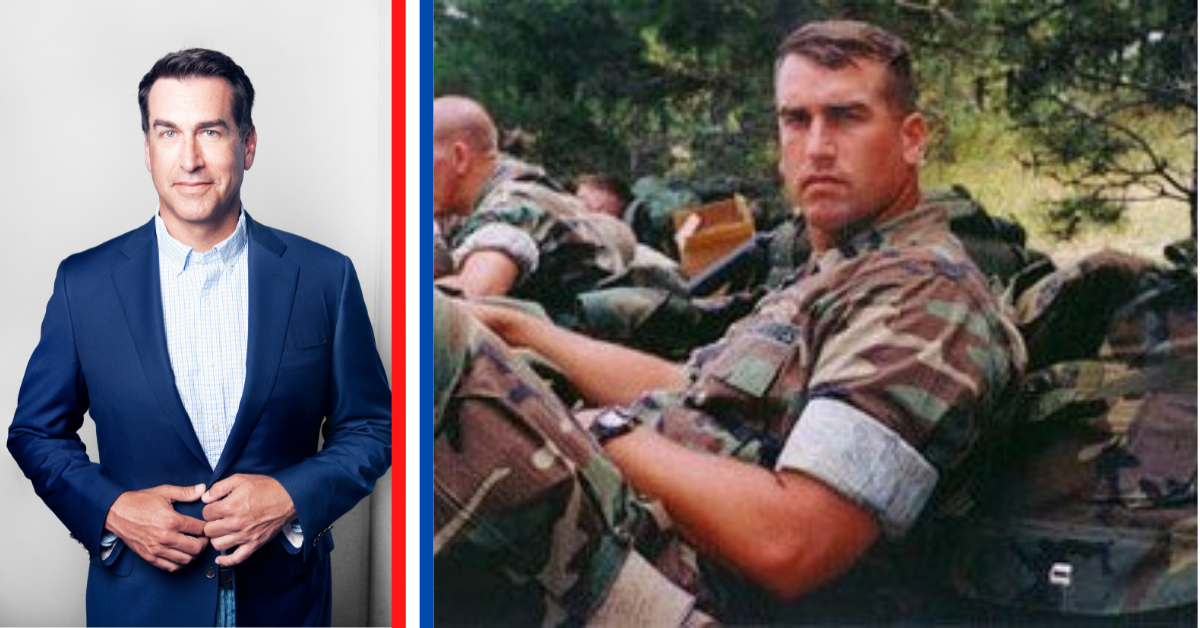 Actor Rob Riggle is well-known for his blockbuster feature film roles and comedy. What you may not know is he is a deeply patriotic retired Marine Corps Lt. Colonel, too.

“I love this country deeply, passionately,” Riggle explained. “I think despite whatever flaws we have –– that within our Constitution and our Declaration of Independence, I just believe in all of what this country stands for and what its potential could be. I feel very passionately about supporting this nation and the way I could do it best was by serving in the military. So, that was one of the driving forces for why I decided to join the Marine Corps.”

He admitted being fascinated with the history of the Marine Corps and how despite being the smallest branch of the Department of Defense, its standards appeared to be the highest. “I like the challenge. I like the fact that you had to earn the title Marine because it wasn’t just given to you,” Riggle added.

Just 19 years old when he joined initially and would serve 23 years in the Marine Corps. Riggle served on active duty for nine years and the rest within the Reserves. “For me it was an opportunity to grow as an individual, learn about responsibility and to accept responsibility not just for myself but for others, too. And it was a chance to make mistakes and learn from them,” he said.

Riggle served in Liberia, Kosovo, Albania and Afghanistan. Though he initially wanted to be a pilot after attending Officer Candidate School, he chose to walk away from flight school to pursue a career in comedy and acting. As an officer in the reserves, he was assigned to Command Elements working in Public Affairs.

“Comedic acting and comedy is in my blood. It’s something — it’s a calling. Just like joining the Marines was a calling. And yes, they don’t necessarily match up, but that’s okay. You can have more than one dream in this country. It’s another reason this is a great country,” he shared. “When I was a Marine, I wore my Marine hat and I conducted myself as a Marine, especially as a Marine officer.”

When America was attacked on 9/11, Riggle worked grueling shifts searching for survivors, by hand. He also volunteered to deploy to Afghanistan with the first wave of Armed Forces as the war began.

Though many of his films were comedic in nature, there was a moment where his military world and acting world collided, stemming from those moments after the terrorist attacks. In 2017 he starred in 12 Strong, a film about the initial invasion of Afghanistan by Army Special Forces Operations (Green Berets). Riggle found himself playing Colonel Max Bower, his former Commanding Officer when he was deployed to Afghanistan.

“I worked directly for the guy that I played in the movie, I was on his staff. I used to brief him every morning and every evening. I knew the man very well,” Riggle shared. “I worked with those guys at the end of the movie who took Mazar-i-Sharif. Two or three weeks after they got to Mazar-i-Sharif, I joined them. So yeah, the movie was very personal for me.”

The military community as a whole is very personal for him, too. In 2016, he founded the Rob Riggle InVETational Golf Classic to benefit Semper Fi and America’s Fund.

As a way to give back and continue his mission of serving America’s heroes he’s putting his support behind Veterans United, as well. “I like that they’re putting servicemen and women in homes –– which is another big part of the American dream,” Riggle said.  For Veterans Day, the organization put 11 veterans into homes and paid off their mortgages, too. “It’s like a dream come true.”

The veterans who were chosen had no idea what was coming. All just happened to be starting the home buying process when they were surprised by the mortgage lender.

Showing appreciation for America’s heroes shouldn’t always take place on Veterans Day, either. Every day, 365 days a year, 24 hours a day, seven days a week, they’re out there. They’re in the Mediterranean, Pacific, they’re out, they’re forward, deployed and waiting for the unexpected to happen. And, God forbid it ever did. But they’re out there and their presence is known and it’s appreciated and they’re protecting our way of life every day,” Riggle said.

His message to current service members and veterans is simple. “Thank you for your service and don’t stop. Keep serving, it gives you purpose. It makes you feel good. It makes you an active and wonderful member of your community when you stay involved,” Riggle said.

Though his transition into his civilian role has been documented publicly, Riggle recognizes hanging up the uniform isn’t easy. His advice was to go all in on pursuing all the things.

“Serving in the military is an amazing chapter of your life and it’s wonderful and you should always be proud of that chapter. But there’s so many more chapters in your life,” he explained. “Find that thing that that calls your name and that you’re passionate about and then go out there and do it.”