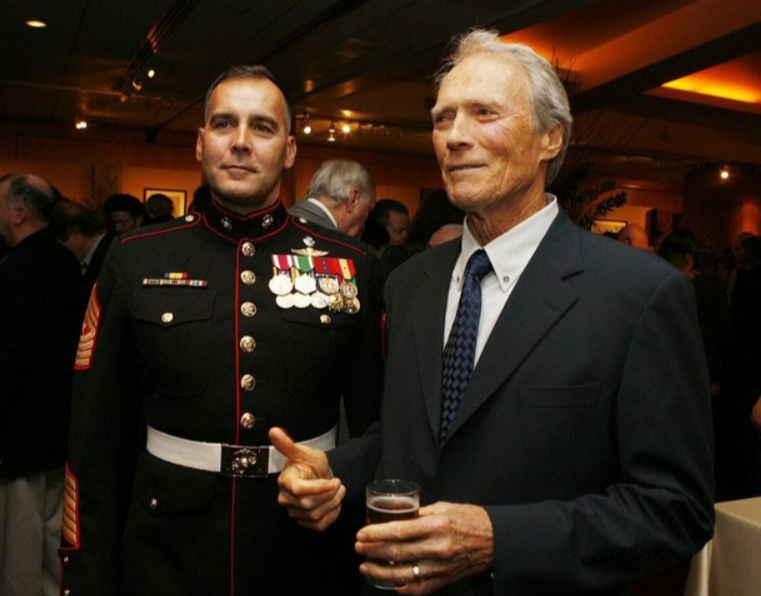 Dever (left) and Eastwood (right) at the premiere of Flags of our Fathers. Photo courtesy of Jim Dever.

Military adviser and retired Marine Sgt. Maj. James Dever offers a glimpse into his past life as an active duty Marine and how his experiences and core values led him down the path to becoming one of the most influential military advisers in the entertainment industry.

In this first iteration of a continuing series that will feature former and retired Marines and their contributions to entertainment, the Marine Corps Entertainment Office asked Dever to discuss how his past led to the present and what he plans for the future.

Though Dever assisted with several major productions including; “Heartbreak Ridge,” “The Last Samurai,” “Flags of Our Fathers,” “American Sniper,” and many more, he credits the Marine Corps with imprinting its’ values on his spirit and gifting him with the experiences that allowed him to achieve more than he ever thought possible, especially considering his humble upbringing.

“My family was poor but I learned how to endure and use it as an advantage in life,” said Dever. “Though my parents separated by the time I was 13 and I was the oldest of three boys living on welfare, I believe that just made me resilient. I did have a great childhood and my youth was a very positive experience. I got to play lots of sports growing up and was active outside all the time.”

Dever’s answer to why he wanted to be a Marine held a bit of irony considering his current profession.

“I watched the ‘Sands of Iwo Jima,’ with John Wayne as a kid and wanted to be a Marine from then on,” said Dever. “I would tell everyone I was going to be a Marine. No one believed me initially, but they do now!”

This is not surprising considering the power and influence of a well told and immersive story. Generations of service members have been inspired by movies such as “Heartbreak Ridge,” “Top Gun,” “Platoon,” and “Full Metal Jacket” among others.

Dever’s shipped off to fulfill his dream of becoming a United States Marine October 1973 and after more than three months of grueling training, his dream became a reality. In 1974, as an infantry Marine with the Walking Dead of 1st Battalion, 9th Marine Regiment, he supported two intense and highly public evacuations in both Vietnam and Cambodia. Images from these operations were widely circulated, showing service members pushing helicopters off ships and into the ocean to make room for the thousands of evacuees.

After his time with the Walking Dead, he served in 2nd Reconnaissance Battalion, then as an instructor for both the Close Quarters Combat and High-Risk Personnel courses. Following his instructor time, he completed the highly selective Federal Bureau of Investigation’s Hostage Rescue Team course and then served at the prestigious Marine Barracks, Washington D.C. Dever’s is also a veteran of Operations Desert Shield, Desert Storm, and Desert Saber. By the time of his retirement in 1998, he had achieved the rank of sergeant major and had served alongside Marines that he would never forget; many leaving lasting impressions on him.

“Early on, my leaders were mostly Vietnam veterans and were highly decorated. Captain Biggers was my company commander when I was with Bravo Co., 1st Bn., 9th Marines and was highly decorated from the war,” said Dever. “My company commander in Charlie Co., 2nd Recon Bn., was Capt. Lovingood; he was battlefield commissioned in Vietnam from first sergeant to second lieutenant and eventually made full bird colonel and commander of The Basic School. While as a battalion sergeant major with 1st Bn., 1st Marines, I served alongside Lt. Col. Steve Hummer, who eventually became a three-star general. While at ‘8th and I,’ I had the honor of serving with Capt. John Paxton, who later became a four-star general and Assistant Commandant of the Marine Corps.”

Dever’s service spanned more than 25 years. He was honored to have served shoulder-to-shoulder with such exceptional people. He credits one Marine in particular with opening the door to the entertainment world.

“In 1986, Lt. Col. Digger O’Dell, the commander of 1st Recon Battalion, put me in charge of working with Clint Eastwood for “Heartbreak Ridge.” Mr. Eastwood hired me then to be a technical adviser,” said Dever. “I was a gunnery sergeant at the time and knew nothing about films or how they were made. I learned a lot and decided to make going into the film industry a post-Marine Corps goal. Of course, I caught some flak for it. My friends called me Hollywood Dever but I took it in stride and prepared accordingly for my new career.”

Despite immense success as a technical adviser, Dever is still very much a Marine. When asked about how he became so successful in the entertainment industry, his response was all sergeant major.

“Honor, Courage, Commitment! I don’t change my values to fit a situation,” Dever said without hesitation. “The Marine Corps strengthened my ability to overcome hardships and dig deep within myself, which helped me transition from the Marines and continue on in the entertainment industry.”

Dever listed endurance, dependability, and integrity among other traits being vital to success in any job.

“I still act like a sergeant major when I am working on set; give 100 percent, show the right and wrong way to do things, keep my commitments and lead by example,” said Dever. “I make sure the actors have military style haircuts, follow regulations, and present a fit military appearance. I teach the history of the uniforms being used in the film to the actors wearing them because people have died in those uniforms and they must be respected. Respecting the history and sacrifice helps build a seriousness in the role.”

Dever recognizes the immense sacrifice and value of service members and believes that veterans are essential to hire in any capacity, citing tireless work ethic as a desired quality within the industry.

“The veterans ‘get it’ and know how to operate on set,” said Dever. “I work with veterans from all branches of service. In fact, my core group is composed of veterans only.” He continued, “Do not change your values to please people. Do your job, keep your values and be yourself. You know the difference between right and wrong. Team building is critical so bring all the leadership principles and traits with you. By keeping your standards, you have an immediate edge and advantage.”

Dever alluded to how to better tell the Marine Corps story in Hollywood.

“For us to have our story told in Hollywood, we need to have educated veterans that know how to write and bring real life experiences to scripts,” said Dever. “To compose a good script, veterans should study at a film school or a writing program. We have a lot of bad scripts here already. On the other hand, look at Clint Eastwood, he only does real stories; ‘Letters from Iwo Jima,’ ‘The Mule,’ ‘15:17 to Paris,’ ‘Flags of our Fathers.’ Hollywood seems to be looking to bring back WWII and Vietnam stories right now where they have failed to make a Korean War film for decades. One of the best Korean War films, in my opinion, is ‘Porkchop Hill,’ we need to see some new Korean War films come out in the next few years.”

Dever’s comments about the movie star that helped launch his career echo his view on leadership.

“Clint Eastwood is just such a professional and, in my opinion, the best leader in the industry,” said Dever. “I wish everybody in the movie business would follow his lead. He doesn’t waste time doing take after take; he sees the shot, knows what he wants and moves on. There is no yelling and no talking on his sets.”

“Mr. Eastwood gets it and is a wonderful gentleman,” said Dever. “He eats with the crew and stands in the lunch line with everyone else just like a Marine would. He sits at a different table every day during lunch to talk with members of the crew. On his sets, he treats everyone as a professional and expects them to do their job.”

Dever credits the Marine Corps with equipping him with the values needed to be successful at anything. He chose to make it his life’s work to help tell compelling and immersive stories that represent the military he is so proud to be a part of.

As for his future in the industry, Dever stated, “I want to be a producer and a director.”

This article was originally published on DVIDs.