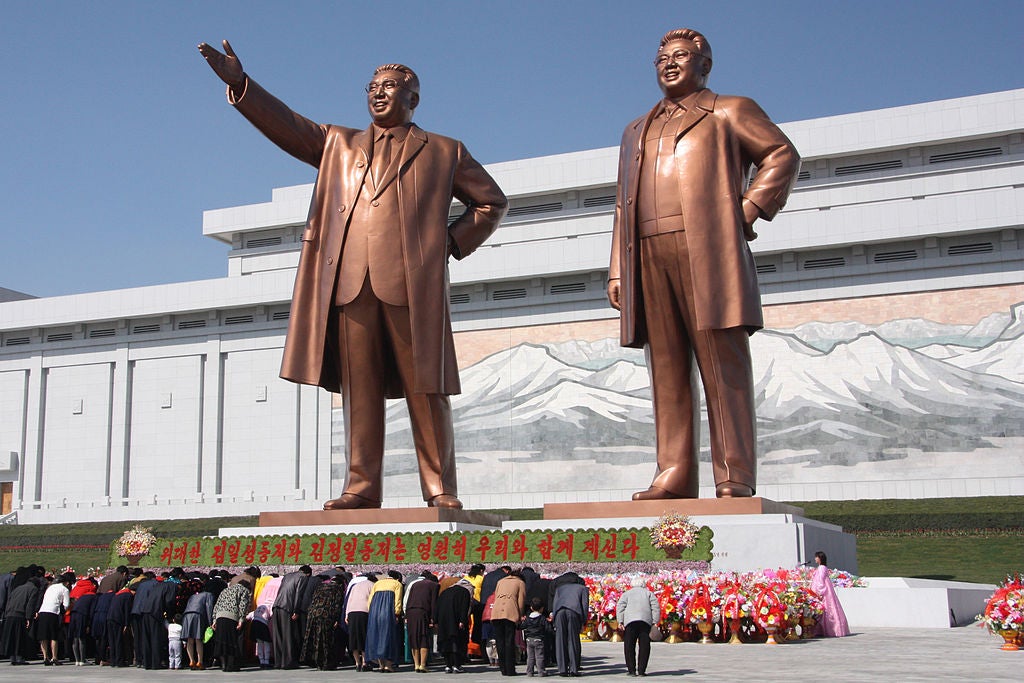 North Korean citizens paying respect to the statues of Kim Il-sung (left) and Kim Jong-il at the Mansudae Grand Monument.

When North Korea’s “Dear Leader” Kim Jong-Il died on Dec. 17, 2011, it left a power vacuum at the top of the Democratic People’s Republic of Korea’s leadership. Kim Jong-Un was considered the country’s “Great Successor,” but many were unsure if he was ready for his seat at the top.

Those people are probably all dead now. It took the youngest Kim just four month to solidify power and take the titles necessary to secure the top spot. Since then, Westerners have speculated (sometimes wildly) about what he had to do to take it, how he maintained it, and even that he failed to.

The fact that these stories turned out to be in some way false doesn’t absolve North Korea. It’s still a prison state that sells drugs and weapons to fund the whims of its leadership. It’s just that the media loves to embellish those stories when it doesn’t have to.

These are just a few of the most wild rumors..

1. He fed his uncle to packs of dogs.

Surviving in a life close to the Kim family dynasty can be hard, and straying from the party line can be hazardous to one’s health – everybody who knows anything about North Korea knows that. But Jang Song-Thaek, Kim Jong-Un’s uncle, was widely expected to act as a regent for the youngest Kim before he assumed power. That did not happen.

We are able to safely say that those who thought Kim might not be ready to lead North Korea are dead, because that’s what happened to his Uncle Jang Song-Thaek. He was executed in 2013 for “anti-party and counter-revolutionary factional acts.” A Hong Kong newspaper reported that he was fed to 120 wild dogs, citing a satire website as its source.

Everyone believed the story, because it sounds like something North Korea would do.

Or owning pornography. No one is sure because the sources vary as much as the story. Hyon Song-Wol is a North Korean pop singer and bandleader that some believe is Kim’s ex-girlfriend. She was reportedly executed for violating the country’s strict anti-pornography laws in 2013.

But Kim didn’t kill his ex-girlfriend, she just dropped out of public view, a common thing in North Korea. Kim Jong-Un did it himself (more on that later). After her time being “dead,” she reappeared with a promotion. This story only caught on because it had everything the media likes: a pretty girl, some tragic violence, and pornography.

3. A general was fed to piranhas.

There’s no doubt that purges happen in the North Korean military, probably on a regular basis, and likely in untold numbers as ranks get lower and lower. The media love to report on the secret killings of North Korean generals, despite no one knowing for sure if the generals were killed or just disappeared.

In 2019, some media outlets reported that Kim Jong-Un fed a general to a tank full of piranhas, just for fun, apparently. Some papers claimed that Kim got the idea from watching the villain Jaws die in the movie “The Spy Who Loved Me,” clearly forgetting that Kim Jong-Il was the James Bond fan of the family.

4. Kim Jong-Un was pretty much dead.

When someone goes unseen in North Korea, DPRK waters tend to take notice. When Kim Jong-Il disappeared for a time toward the end of his life, he returned to public life looking frail and elderly. He died not long after. A similar event happened to Kim Il-Sung, the founder of North Korea. So when people go missing, it’s not crazy to assume they’re dead.

Kim Jong-Un, however, is just in his mid-30s, whereas his father and grandfather were both well into their later years. When Kim Jong-Un dropped out of sight in April 2020, media immediately assumed he was either brain dead, had heart surgery or was just dead. He wasn’t at all. No one knows where he went or why, but he reappeared, looking as healthy as ever.

Kim Yo Jong made an international splash when she appeared at the 2018 Winter Olympics in Pyeongchang, South Korea. During the Opening Ceremony she sat alongside South Korea’s president and directly behind U.S. Vice-President Mike Pence. Ever since, she’s been closely watched, as she’s the head of Pyongyang’s Propaganda Ministry – the role Kim Jong-Il used to assure his rise to power.

Since then, she’s been a special envoy from Kim Jong-Un, become a member of the DPRK’s politburo, and more. In 2020, intelligence reports indicated that she had assumed the top spot held by her brother and the media went wild for the first female Kim in North Korea. But those reports were mistranslated – Kim only delegated her more authority.