5 reasons Canada might be the most powerful country on Earth 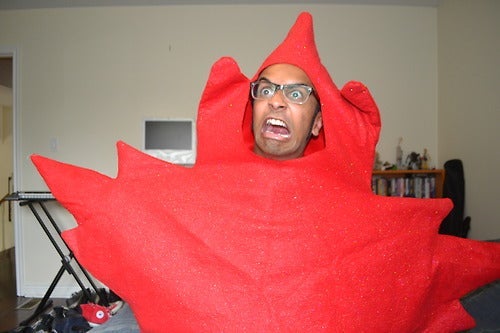 The stereotypical Canadian is nice, polite to a fault, and humble.

But those who have seen Canadians in combat have another point of view. This is where the Viking streak in Canadian history comes out in full force.

Saudi Arabia depends on the U.S. for its stability and military protection too, but you don’t see Canada out there exporting terrorism to its neighbors. Canada enjoys a (deserved) reputation for being peaceful.

But don’t make Canada angry. You wouldn’t like them when they’re angry.

Canada is small country, when you consider their population against how geographically big Canada really is. Theirs is a population akin to California, with surface area akin to the entire United States.

But when they mobilize for war, they really mobilize. In WWI, Canada contributed 620,000 troops from a population of 8 million – 8 percent of the population. At Vimy Ridge, an all-Canadian force overcame a heavily defended German position that had previously wiped the floor with British and French. Vimy Ridge is to Canadians as Derne is to the Marines.

Also Read: This is Canada’s version of SEAL Team 6

For WWII, Canada formed a force of 1.6 million from a population of 11 million – more than 14 percent of Canadians. All this without a real draft. Pivotal moments in the Second World War were handed to Canada, and they didn’t disappoint. For example, Juno Beach was one of the most heavily defended places in Europe when Canadian Forces landed there on D-Day, and within 12 hours, it belonged to Canada.

That’s just the 20th Century. More on that later.

4. A country full of people who give a shit

One of the things I heard (and saw written on walls) while deployed as a combat cameraman was “the Marines are at war, America is at the mall.” And yeah, you might never know the United States has been fighting a series of wars for the past 16 years just by walking the streets.

Canadian war dead are flown into Canadian Forces Base Trenton, in Ontario. From there, they are driven to Toronto on Highway 401, a 100-mile stretch of road that has come to be called “The Highway of Heroes.” And when one of their own comes home in flag-draped casket, Canadians line this freeway waving flags and bearing salutes as the fallen troops’ procession drives by unimpeded.

Related: Canadians honor their fallen troops by lining the ‘Highway of Heroes’

For every single fallen soldier.

I doubt anyone will argue with me on this one. Canadian snipers are incredible.

Americans can poke fun at the Canadian Forces all they want, but their military is a potent one, especially when it comes to snipers. Recently, a Canadian scored a kill and a distance record by hitting an ISIS militant from over two miles away.

That topped the previous record, held by a British sniper, who took it from – a Canadian. In fact, in the top five distance records, three are Canadian. It’s been a long time since a Western country has fought in large-unit combat. So the effectiveness of small units means a lot more.

And Canada’s got it where it counts.

Power is not just about numbers of tanks, planes, and men. We still live in an age where militaries need oil to be successful. The future isn’t here yet. A whole lotta great hardware runs on fossil fuels and Canada has the third largest reserve in the world, dwarfing the United States.

Oil aside, Canada is full of natural resources that could be exploited in case of an existential threat to the country or a need to mobilize for an all-out war. Add on a stable, growing economy and an industry that operates at 82.2 percent capacity and you have a pretty good home front for any conflict.

1. Being the only country to hand the U.S. its ass in a war

While technically, Canada was part of the British Empire at this point, the people living in Canada during the War of 1812 couldn’t rely on Crown to provide them with the backup troops needed to put a beat down on the Americans. Britain was busy with a guy named Napoleon in Europe at the time.

Related: Here’s how the U.S. planned to invade Canada

The Canadian subjects of the British Empire did a pretty good job of not being annexed by the United States, even though they took significant losses. This is a gross oversimplification, but they were able to mount some significant offenses of their own.

And when we burned York – modern-day Toronto – they responded by doing something dictators, terrorists, and Communists can only ever dream about today: They marched on and burned Washington, D.C.

Despite fighting with one hand tied behind their backs, they managed to fight us to a draw.